Oil and Water Don’t Mix: Why the ACLU Is Standing Up for the Standing Rock Sioux Tribe 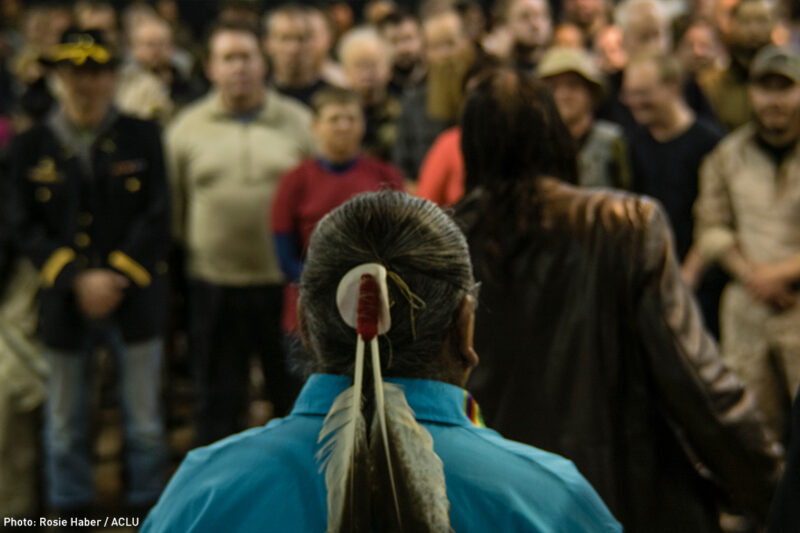 On December 4, the Army Corps of Engineers did the right thing by refusing to give Energy Transfer Partners permission to build a portion of the nearly 1,200-mile-long Dakota Access Pipeline under Lake Oahe in North Dakota. The corps’ decision to perform an environmental impact assessment and explore alternative routes for the pipeline fulfilled the U.S.’s treaty obligations with the Standing Rock Sioux Tribe, which vigorously protested the pipeline out of a credible fear that it could rupture and destroy its water supply, as well as acted in accordance with this nation’s environmental protection laws. It was a big win for the tribe and its supporters.

But it didn’t last long.

Days after President Trump took office, he issued a memorandum and an executive order asking the corps to expedite its consideration of the company’s application for an easement to start construction. Soon after, the corps withdrew its call for the environmental study, and Energy Transfer Partners began drilling the next day. The reversal was a slap in the face of the tribe and its treaty rights with the United States. Quickly, the Standing Rock Sioux asked the courts to intervene and stop the pipeline so its impact on the environment could be assessed.

The courts are now the Standing Rock Sioux’s last hope to get the pipeline routed around its land.

That’s why this week the ACLU signed onto a friend-of-the-court brief with 34 Indian tribes and other organizations in support of a case filed by the Standing Rock Sioux Tribe in federal court against the Army Corps of Engineers. The tribe’s lawsuit seeks to halt further drilling and construction of the pipeline until the corps conducts a proper environmental impact statement consistent with federal statutes, such as the National Environmental Policy Act, as well as the federal government’s responsibility to protect the tribe’s rights and sovereignty under the 1868 Treaty of Fort Laramie.

The federal government has once again betrayed the Standing Rock Sioux.

As outlined in our brief, the pipeline should be halted immediately consistent with the Standing Rock Sioux’s treaty rights as well as to prevent, for good, any chance a pipeline leak or rupture could despoil the tribe’s land and water. Energy Transfer Partners, however, claims that the chance of a rupture in the river is low, but there are three responses to that claim.

First, the chance of a rupture isn’t that low. In July 2015, the Michigan Petroleum Pipeline Task Force issued a comprehensive report of pipeline failures. The study found “hundreds” of pipeline ruptures “that have occurred throughout the U.S. pipeline system.”

Second, the possibility of a rupture — whether low or not — must be considered together with the consequences of a rupture. Even a “moderate” release of oil into the Missouri River would have profound and devastating consequences, a subject that the company’s press releases ignore.

Lastly, it is fair to ask: Who would suffer the most by a rupture? The immediate victims of a rupture of the pipeline would be the members of the Standing Rock Sioux Tribe, now that the pipeline has been moved into their watershed. But the degradation of the water would also impact some 18 million people downstream who depend on water from the Missouri River.

Since 1974, it’s been the ACLU’s national policy to support Native Americans’ right to a tribal land base and its natural resources as well as support tribes who press their treaty rights with the U.S. government. Under treaties the Standing Rock Sioux made with the U.S. government as well as under federal statutes, the tribe has the right to protect its land, its heritage, and its water from contamination by a possible pipeline rupture. The treatment of the Standing Rock Sioux by Energy Transfer Partners and all levels of government compel us to help the tribe as they fight to stop the pipeline construction from proceeding so that a simple environmental impact assessment can be conducted.

The federal government has once again betrayed the Standing Rock Sioux and made a mockery of its obligations to the tribe while jeopardizing the drinking water of over 18 million Americans. We hope our brief helps convince the courts that a great injustice is taking place on federal land just north of the Standing Rock Sioux’s territory and that it should be stopped immediately.