Remembering the Sacrifices of Selma by Fulfilling its Promise 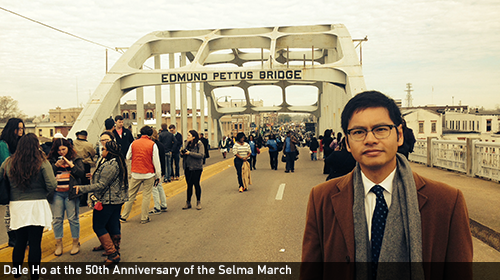 On March 7 and 8, ACLU joined more than 80,000 Americans in Selma, Ala., to commemorate those who marched and risked their lives in Selma 50 years ago. Their bravery led to the passage of the Voting Rights Act of 1965.

Being in this crowd commemorating this historic event left ACLU leaders reenergized for continuing the fight ahead. In the second piece of this three-part series, ACLU Voting Rights Project Director Dale Ho describes how voter suppression has re-emerged since 2008. Tomorrow, the series will conclude with ACLU Racial Justice Program Director Dennis Parker, who will write about being inspired by the next generation of racial justice activists. Yesterday, ACLU Senior Legislative Counsel Deborah J. Vagins wrote about how the sacrifice of those on Bloody Sunday should inspire the country to pass the Voting Rights Act of 2015.

I had the honor of joining thousands who walked across the Edmund Pettus Bridge in commemoration of the 50th anniversary of the Selma to Montgomery march. That march was the crucible from which the Voting Rights Act was born and transformed America.

The VRA has been called the crown jewel of the civil rights movement, and for good reason. Registration rates for African Americans throughout the South skyrocketed immediately in the wake of the VRA’s passage. The 15th Amendment’s long unfulfilled promise that all Americans be able to vote free from racial discrimination finally began to become a reality.

By the 1980s, debates about voting rights shifted largely to questions about how election lines are drawn – the redistricting process – rather than about basic ballot access. In fact, about 90 percent of the cases under the VRA during the 1980s through the 2000s were about redistricting and related issues. But it seemed as though a consensus had been achieved: All Americans should be able to vote, and voting should be free and easy.

That consensus has sadly broken down in recent years. What happened?

The 2008 election saw what was – until that point – the most diverse electorate in our nation’s history. People of color constituted a quarter of the eligible electorate for the first time. And then from 2011 to 2012, 27 measures were passed or implemented in 19 states that would make it harder to vote. Many of these measures were rightly blocked in the 2012 cycle.

But in 2013, the Supreme Court struck down what had been called the “heart” of the VRA – ending the Section 5 preclearance regime, which had placed critical restrictions on states and localities with the worst records of discrimination historically. In the 5-4 majority’s view, those protections were no longer necessary and, in fact, had become unconstitutional.

Then, in 2014, politicians tried to chip away at the right to vote yet again. In Ohio, the state eliminated the early voting days and times on which over 120,000 Ohioans voted in 2012. We brought a lawsuit to block those cuts, arguing that they violated the VRA and the Constitution. In North Carolina, we similarly argued that the state’s elimination of same-day registration was unlawful. States that have same-day registration experience turnout 10 percentage points higher than other states, and 90,000 North Carolina voters used it in 2012. In both North Carolina and Ohio, the federal appeals courts in each district agreed with us, but the Supreme Court stayed those decisions.

Meanwhile, in Wisconsin, we brought a successful lawsuit striking down that state’s strict voter ID law. The court found that 300,000 registered voters in Wisconsin lack acceptable ID. The federal appeals court stayed that decision, but at the last minute, the Supreme Court stepped in and blocked Wisconsin’s ID law temporarily for the 2014 election.

When you look at all of this together, it is clear that the right to vote – which had been nurtured and expanded for decades – is once again under attack. And while a new bill has been introduced to restore the VRA, it has not yet moved forward. In his powerful speech Saturday, President Obama called upon Congress to pass the bill, and we hope they will soon heed the president’s call.

The history of the right to vote in our country has not been one of linear progress, but rather has always seen fits and starts. Reconstruction brought the near universal enfranchisement of African-American men, but that shining moment was followed by decades of Jim Crow and disenfranchisement.

Today’s moment is obviously different in many ways. But it is not entirely dissimilar, either. At this critical juncture, it is imperative that we not simply remember the heroes of Selma. Rather we must honor them and their brave sacrifices by restoring the consensus that all Americans must be free to vote.