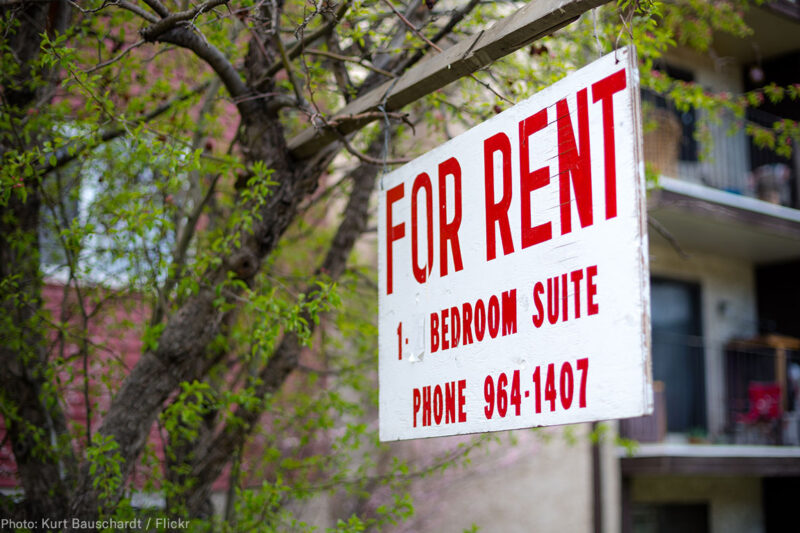 Let’s say there’s a 65-year-old man looking for an apartment to rent. Do you think the fact that he was convicted of three misdemeanors as a teenager is relevant to whether he’ll be a good tenant? Is it relevant that a young parent has a warrant out for her arrest because she missed a court date? Is it relevant that her partner completed probation on a drug-related offense nine years ago? And what about the fact that, because of discrimination in the criminal justice system, each of these people is disproportionately likely to be a person of color?

In Savannah, Georgia, police policy barred all three of these people from securing housing in one of the many large apartment complexes that it certifies as “Crime Free.” Police training materials strongly suggested that property managers and landlords of these complexes secure a crime-free logo to put in their advertising, so that they’d appeal to “good” tenants. Police also incentivized participation in the program by directly providing managers of certified properties with information about calls for service on their properties as well as helping with evictions.

Participating landlords had to attend a training at which the police instructed them on, among other things, how to keep crime out of their properties by rejecting applicants with a criminal history. The police website lists 20 participating apartment complexes, some containing hundreds of apartments, though a police department official has suggested that the number could be as high as 39. Regardless, it’s clear that complexes participating in the Crime Free Housing Program make up a significant share of all affordable rental apartments in Savannah.

These criminal history exclusions were complete and final. Police had been telling landlords to bar people based on their records alone, with no consideration of their particular circumstances or stories and without regard to evidence of rehabilitation. The ban also extended to, among others, anyone who has been convicted of a nonviolent felony — like a drug possession felony — in the last 10 years and anyone who has been convicted of any misdemeanor — like driving with a suspended license — in the last five years.

Savannah’s screening policy was overbroad, discriminatory, and illegal. Along with the ACLU of Georgia, Georgia Legal Services Program, and the Savannah-Chatham County Fair Housing Council, we sent the police chief a letter demanding that the police immediately stop requiring landlords to perform criminal history screening. In response to our letter, the city of Savannah has announced a suspension of the Crime-Free Housing Program while it reviews the policy.

That makes good sense. There’s simply no evidence that these broad-based exclusions actually render housing safer. In fact, available research shows that people who engaged in criminal conduct more than six years ago are about as likely to commit crime in the future as people with no record at all. Beyond that, there’s just no reason to continue punishing people when they’ve already served their time, including for behavior decades in the past.

There’s plenty of evidence, though, that barring people from housing based on criminal history disproportionately excludes people of color. Nationwide, Black people are arrested at a rate more than double their proportion of the general population and imprisoned at a rate about three times higher than their proportion of the general population. Black men are imprisoned at a rate almost six times greater than for white men, and for Hispanic men, the rate is nearly twice that for non-Hispanic white men.

In Georgia, Black residents make up about 30.5 percent of the population, but 62 percent of those incarcerated in Georgia prisons. As a result of these and other disparities in arrests and prosecutions, barring people based solely on criminal history will disproportionately harm people of color. That’s why the federal Department of Housing and Urban Development issued legal guidance in 2016 making it clear that excluding people from housing based on criminal history can violate the Fair Housing Act.

Sadly, though, the guidance hasn’t solved the problem.

Although excluding people with criminal history from housing leads to increased rates of homelessness and recidivism, both of which cost local governments money, thousands of towns and cities around the country continue to push landlords to screen and exclude these people as part of so-called crime-free programs. These programs also require landlords to include language in leases making it a violation of the lease to engage in any kind of criminal activity, whether or not there’s an arrest, prosecution, or conviction. Police then have enormous discretion to pressure landlords to evict tenants without the need to prove a criminal case beyond a reasonable doubt. Landlords only have to meet the more subjective preponderance of the evidence standard when evicting tenants, meaning the evidence is convincing but reasonable people could disagree.

There’s nothing wrong with police departments trying to keep rental housing safe. But crime-free programs operate on the explicit assumption that renters are inherently criminal and dangerous and increase police control over renters’ lives on that basis. These policies serve to exclude people of color from desirable housing, the latest in a long and sorry history of local government policies with that same result. And they buck the trend in Georgia, where criminal justice reform is taking off.

We look forward to working with Savannah to change course.