A South Carolina Student Was Arrested for ‘Disturbing a School’ When She Challenged Police Abuse, So We Sued 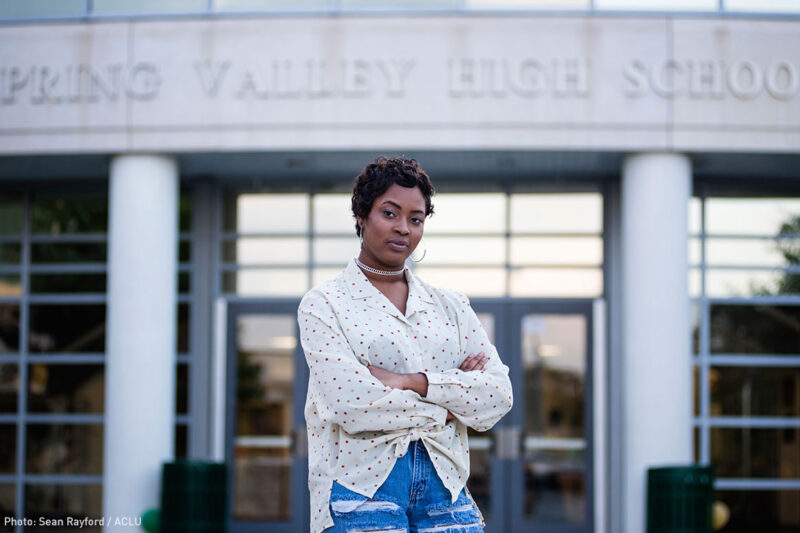 One day last fall, Niya Kenny was sitting in her math class at Spring Valley High School in Richland County, South Carolina, when a police officer came into the classroom. A girl in her class had refused to put away her cell phone, and the teacher had summoned an administrator, who called on the officer assigned to the school.

Niya thought the officer’s appearance was bad news — his name was Ben Fields, but he was so aggressive that students knew him as Officer Slam. As soon as he entered the room, she called out for other students to record him.

Three different students made cell phone videos of what happened next. Fields picked the girl up, flipped her in her desk, and then grabbed an arm and a leg to throw her across the room. Niya stood up and called out, she recalled later. “Isn’t anyone going to help her?” she asked. “Ya’ll cannot do this!”

Niya was so scared she began to shake and cry. As Fields handcuffed the other girl, he turned toward Niya and told her she was going to jail, too.

Niya was arrested, handcuffed, charged as an adult, and taken to jail. She was released that evening with criminal charges of “disturbing a school.”

Today she’s fighting back. On her behalf, the ACLU filed a lawsuit challenging the South Carolina law that makes “disturbing a school” a criminal offense, on grounds that it’s unconstitutionally vague. The ACLU is also challenging another vague “disorderly conduct” law, which makes it a crime for students at school to conduct themselves in a “disorderly or boisterous manner.”

Every year, more than a thousand students in South Carolina — some as young as 7 years old — face criminal charges for not following directions, loitering, cursing, or the vague allegation of acting “obnoxiously.” If charged as adults, they can be held in jail for up to 90 days.

Students of color are four times as likely as white students to face criminal charges under this law. In Charleston, Black students are about six times more likely than their white peers to be charged under the statute.

Across the country, the ACLU is concerned about similar laws criminalizing routine adolescent behavior, which disproportionately affect kids of color.

The South Carolina law has been invoked to pull thousands of young people out of classrooms and push them into systems of juvenile and adult criminal justice.

For Niya, the courage to speak up against what she knew to be wrong came with a price. She is being treated like a criminal. Ben Fields lost his job, but Niya is still facing charges.

Anxious and fearful about going back to school, days after the arrest, Niya dropped out and enrolled in a GED program.

Niya’s arrest had serious consequences for her. Children should not be hauled out of school in handcuffs for talking back in class. We will keep fighting school disturbance laws across the country so that kids like Niya can stay in their classrooms and out of the criminal justice system.

Kids should never go to jail for simply acting their age.