In South Dakota, Officials Defied a Federal Judge and Took Indian Kids Away From Their Parents in Rigged Proceedings 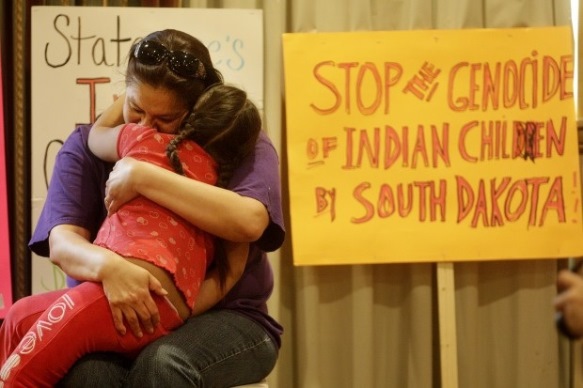 During the mid-1970s, Congress confirmed what Indian tribes had been saying for decades: State and local social workers and judges were aggressively using child custody hearings to take Indian children away from their families and tribes and place them in foster or adoptive homes, more often than not with white families.

According to a congressional investigation, between 25 and 35 percent of all Indian children in the U.S. had been taken from their homes — a rate that jeopardized tribal culture if not the very survival of the tribes. Investigators determined that many removals were unwarranted and unnecessary. In 1978, Congress responded by passing the Indian Child Welfare Act (ICWA), which established minimum federal standards to guide when and how state agencies could remove Native American children from their parents’ custody and their cultural environment.

Nearly four decades later, state and local social workers and judges in Rapid City, South Dakota, are violating the rules in open defiance of ICWA, the Constitution, and now a federal judge. The reason for their noncompliance is unclear but the consequences are striking. Since 2010, more than 1,000 Native-American children in Pennington County, home to Rapid City, have been removed from their families by state welfare workers and placed in foster care, disproportionately in non-Indian homes.

The child custody hearings typically lasted fewer than five minutes — some were done in 60 seconds — and the state won 100 percent of the time.

In 2013, the ACLU agreed to help challenge this. We filed a class action lawsuit on behalf of two South Dakota tribes, the Oglala Sioux and Rosebud Sioux Tribes, and on behalf of all Indian families living in Pennington County South Dakota, challenging the state’s child removal procedures of Indian children. The defendants are the presiding state court judge, the state director of DSS, the Pennington County director of DSS, and the state attorney filing the removal petitions.

In March 2015, Chief Federal District Court Judge Jeffrey L. Viken confirmed what our complaint had alleged: State employees were removing children from their homes and then holding hearings in state court within 48 hours, in which parents were not assigned counsel to represent them, were not given a copy of the petition accusing them of wrongdoing, and no state employee was called to testify. Moreover, the parents were not permitted to testify, call witnesses, or cross-examine any state employee. The hearings typically lasted fewer than five minutes — some were done in 60 seconds — and the state won 100 percent of the time.

Often, Judge Viken found children would remain in foster care for two months or longer before their parents were given an opportunity to challenge the removal at a subsequent hearing. The judge held that the removal hearings violated ICWA as well as the Due Process Clause of the 14th Amendment to the Constitution. He invited both the plaintiffs and the defendants to suggest remedies for the violations. However, the defendants not only failed to submit any proposed remedies but largely ignored Judge Viken’s ruling.

In August 2016, Viken convened a compliance hearing, which revealed the scope of the defendants’ inaction. He followed in December 2016 with a 27-page decision finding that the defendants “continue to disregard his prior rulings” and ordered “an immediate halt” to further violations. This time his ruling was accompanied by a formal injunction, which means that failure to comply could result in a contempt of court citation.

During the 1970s inquiry that led to the establishment of ICWA, Congress found that state officials, including judges and social workers, often removed Indian children based on biased and culturally insensitive grounds. To many Anglo-Americans, for example, leaving a child for extended periods of time with a grandparent or other relative may seem like abandonment, but such conduct is accepted and even encouraged on many Indian reservations. It’s worth noting that in his December 2016 ruling, Judge Viken cited the 1954 Supreme Court decision in Brown v. Board of Education, which required the integration of public schools. As we know, that decision was met with explicit and orchestrated defiance from some state officials who opposed it. Judge Viken’s reference to Brown is fitting.

Since the defendants never drew up their own remediation plan, in his recent ruling Judge Viken specified the actions they needed to take in order to rectify past procedural violations and to fully comply with ICWA and the Constitution. But the defendants prefer to dig in their heels: They are appealing Viken’s injunctions to the U.S. Court of Appeals for the Eighth Circuit in St. Louis. Their briefs are due March 10th.

The South Dakota officials who are resisting Viken’s orders are the ones most responsible for ensuring that Native American children and their families are treated fairly and properly. To that end, they must obey federal law. We intend to make sure that they do.