The State of Equality & Justice in America: The Pendulum Swings between Joy and Despair 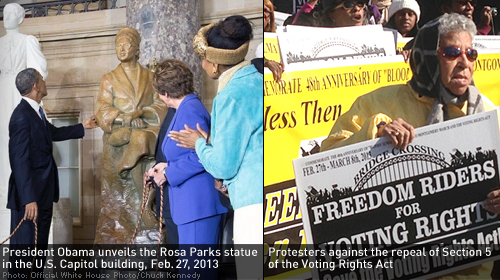 Let’s just take one day, February 27, 2013, as a snapshot of the state of equality and justice in America.

For me, that day started off tense. The Supreme Court was set to hear oral arguments in the case of Shelby County v. Holder—a constitutional challenge to one of the most effective provisions of any civil rights law in American history: Section 5 of the Voting Rights Act.

Section 5 requires nine states and assorted jurisdictions in seven others to secure Justice Department approval before changing their voting laws. The civil rights community collectively saw it as an ominous sign that the Supreme Court even agreed to revisit the constitutionality of Section 5. The Voting Rights Act of 1965, almost a century after passage of the 15th Amendment—finally brought full voting rights and a more representative government to the South. I refuse to be pessimistic because the facts are on our side and the congressional hearing record justifying Section 5 was meticulous. It only takes 4 Justices to agree to hear a case, but I believe that 5 justices will uphold the law.

During arguments, the lawyers ably defended Section 5, but they were confronted with clear hostility from conservative justices. Justice Scalia stunned everyone by openly showing contempt for the 2006 reauthorization of the VRA by Congress. “Who wouldn’t,” he asked caustically, “vote for something called the ‘Voting Rights Act’?” He then piled on even more, calling Section 5 a “racial entitlement.” As someone tweeted: Wasn’t voting a white-only racial entitlement prior to the Voting Rights Act?

Contrast these very real challenges with a joyous and historic event that started an hour after the Shelby oral argument right across the street. Inside the United States Capitol (an edifice built with slave labor), in a ceremony filled with all of the pomp and circumstance afforded to presidents and war heroes, Congress unveiled a life size statue of Rosa Parks. Parks ignited the Montgomery bus desegregation boycott by being arrested for refusing to give her seat to a white passenger. Her statue sits among of a cluster of white men encircling the round hall, and falls within the gaze of the statue of Jefferson Davis, the president of the Confederacy during the Civil War.

At the ceremony were family members of Parks, a military Color Guard, and the United States Army Chorus, which gave a stirring rendition of the Negro National Anthem “Lift Every Voice and Sing.” Republican and Democratic Congressional leaders all addressed the large crowd with unusual poignancy. And three history-making black men spoke as well: Rev. Barry Black, the first black chaplain of the United States Senate; Rep. James Clyburn, the first African American elected to Congress from South Carolina since Reconstruction (as a result of the Voting Rights Act Extension of 1982); and the first black president, Barack Hussein Obama.

My heart swelled and tears came to my eyes. I felt lifted by how far we have come as a people of African descent in the United States. I was elated that Ms. Parks would be afforded such an honor and granted such universal respect. And I noticed all the black, Asian-American and Latino members of Congress, whose numbers had tripled, as a result of the VRA, in the three decades since I first stepped foot on Capitol Hill.

As I left the ceremony, beaming, I had a message on my BlackBerry that immediately swung the pendulum back to tense. The Institute of Assets and Social Policy released a study titled “The Roots of the Racial Wealth Gap: Explaining the Black-White Economic Divide,” which tells a terrible story. As detailed in the report, the wealth gap between white and African American families has tripled in the last 25 years, driven by dramatic disparities in years of home ownership, unemployment, post-secondary education, generational wealth transfer and financial support among families and friends.

But, after returning home, I am able to read the New York Times, and I get a dose of good news: an article reporting sharply declining rates of imprisonment for African Americans, a trend we hope to see continue in the years to come. One reason for optimism is the Fair Sentencing Act, a bill that I worked on with my colleagues in the criminal justice reform and civil rights movements, which was signed into law by President Obama in 2010 and championed by Attorney General Eric Holder, the first African American to hold that post.” Though a superb development, it’s tempered by the fact that one out of every 13 African Americans is disfranchised because of a criminal conviction and black male incarceration rates are more than six times the national average for white men.

So, that was February 27th for me. Just one day shows that from hour-to-hour the pendulum can swing from joy to despair and despair to joy. That’s the state of equality and justice in America today: conflicted, fickle, and a source of both hope and great concern in virtually equal measure.