What Does It Take To Truly Be "My Brother's Keeper" 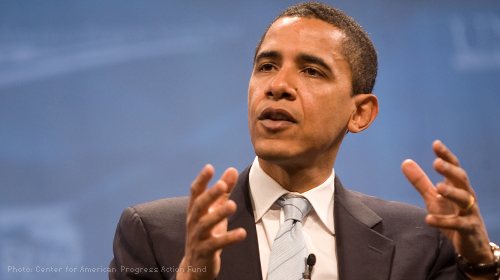 A year ago, Kyle Thompson a young, Black, freshman was led away from his school in handcuffs and ultimately expelled from school. His offense? Mistakenly thinking that his teacher’s attempt to take a note for him was a joke and playfully trying to get the note back. When he realized this wasn’t play, he immediately let her have the note. That misunderstanding left Kyle out of school and facing criminal charges. His harsh punishment is a reflection of zero tolerance discipline policies; policies that all too often disproportionately impact young people of color.

In an address yesterday President Obama made it clear that there are too many “Kyles” being pushed out. The president set the stage by defining a problem – “Boys and young men of color — regardless of where they come from — are disproportionately at risk from their youngest years through college and the early stages of their professional lives.”

He then went on to outline the broad contours of “My Brother’s Keeper Initiative“, a program seeking to harness the resources of the federal government, the private sector and a number of philanthropic foundations to address the lack of opportunities available to young men of color in the United States. The details of the initiative have not yet been announced. As with any ambitious undertaking, it is on those details that the ultimate success of the program will depend. But although numerous questions remain, the president’s announcement was encouraging.

Most encouraging was the fact that the president’s statements were a frank acknowledgement of the inter-related and complex factors which disadvantage young men of color. Although the president has been faulted in the past for avoiding the particular, harmful role that race plays in American society, yesterday’s address left no doubt that he recognizes that the obstacles to “ladders of opportunity” in American society were ones that were, “in the aggregate” more likely to confront Black and Latino young men. And the consequences of those barriers were clearly laid out. It was clear that higher suspension, expulsion and arrest rates for students of color lead inexorably to fewer life opportunities in education, employment and the opportunity to participate fully in the nation’s civic life. Equally clear was that although the effects are felt most harshly by young men of color, the problem is one that affects everyone and that the nation as a whole suffers. His assertion of the importance of recognizing that “my neighbor’s child is my child” was particularly moving in light of his recognition of the presence in the White House of the families of Trayvon Martin and Jordan Davis, both of which lost children in a manner that raised questions about the extent to which the lives of young men of color are valued in American society.

Most heartening was the president’s description of the issue of lack of opportunity for children of color as being one of the most important faced by his administration. It is hopeful that this emphasis will lead to the elimination of the barriers which limit young people of color and prevent us from being the greatest country that we could be.

As this program takes shape, there are some things which must be taken into consideration. Although the president lauded the initiative as one which will not require the infusion of great amounts of money, it is important that we assess realistically the role that grossly disparate resources plays in the lack of opportunity for school children of color. We must also be careful that the needs of girls and young women of color are not ignored by ensuring that these types of opportunities include them as well. Finally, while every effort is made to encourage young people of color to embrace values that will lead to success, we must recognize that many of the barriers they will face are external. On a daily basis the ACLU is working on dealing with discrimination in discipline, unfair zero-tolerance policies and improper use of police in schools. Our work underscores the fact that it is not enough to lead young people to the gateways of opportunities when the gates are locked by unfair and discriminatory practices.

A commitment to addressing the problems of lack of opportunity for children of color is an important first step. We are hopeful that the president and the nation as a whole carry through on this commitment.