What Have We Learned from the Spies of Mississippi? 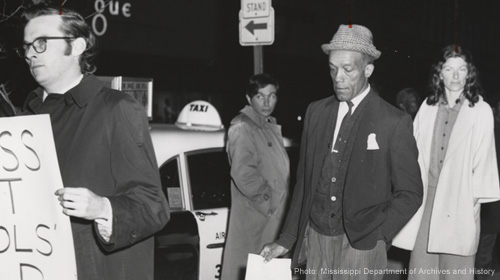 The documentary film “Spies of Mississippi,” which aired on PBS on Monday, is a grim reminder of the depths that Mississippi authorities plumbed in their efforts to subvert the civil rights movement. The film chronicles the role of the Mississippi State Sovereignty Commission, a secret, state-funded agency established by the Mississippi legislature in 1956. Using a range of spy tactics, the Commission sought to maintain racial segregation, preserve Jim Crow laws, and prevent “federal encroachment” in Mississippi.

The film draws on a trove of Commission records, which are available and searchable online thanks to a 1994 court order in a lawsuit brought by the ACLU of Mississippi. It turns out that the Commission was nothing if not meticulous, documenting the full range of its exploits in service of white supremacy. It initially focused on tracking the activities of civil rights organizations in Mississippi, but within a few years it had mushroomed into a full-scale spy agency, employing a network of investigators and agents who surveilled civil rights activists, tapped their phones, monitored their meetings, stole sensitive documents, and undermined voter rights efforts.

The Commission was ruthless, waging an all-out war against change. Perhaps most painfully, it assembled a cadre of African American informants, some of them respected figures from within the civil rights community, who reported to the Commission on the strategy and plans of the burgeoning rights movement — and sowed fear and mistrust among civil rights leaders. It destroyed the lives of people like Clyde Kennard, a Black Korean War veteran who attempted to enroll at what was then Mississippi Southern College. The Commission orchestrated the planting of evidence used to convict Mr. Kennard of stealing chicken feed. He served seven years in prison. Commission agents also funneled information to local law enforcement (which was rife with KKK members) about student activists who were descending on Mississippi for the “Freedom Summer” of 1964, including James Chaney, Andrew Goodman, and Michael Schwerner, who were then murdered by Klansmen.

It may be tempting to isolate these events in the past and decry what happened “back then” in the deep South. That would be a mistake. For African Americans, the legacy of segregation and Jim Crow remains a live issue. And while race-based discrimination is no longer the law of the land—and nothing like the Commission could function today–federal and state law enforcement agencies are still engaged in racial profiling. That’s in large part because the Justice Department’s “prohibition” on racial profiling by federal law enforcement agencies doesn’t extend to national security and border integrity investigations — two huge exceptions that essentially swallow the rule. Likewise, the Attorney General’s guidelines for domestic FBI operations allow agents to investigate anyone, without any factual basis for suspicion, as long as the agents claim they are seeking to prevent crime, protect national security, or collect foreign intelligence. Federal law enforcement and intelligence agencies have taken full advantage of the license they’ve been given:

Ultimately, films such as “Spies of Mississippi” serve two vital purposes: remembrance and reminder. They advance the long project of accounting for America’s history of racial subjugation, in brutal detail. They also remind us, in the words of Mississippi Congressman Bennie Thompson, of the “need to keep us safe from terrorists, but also from ourselves.”