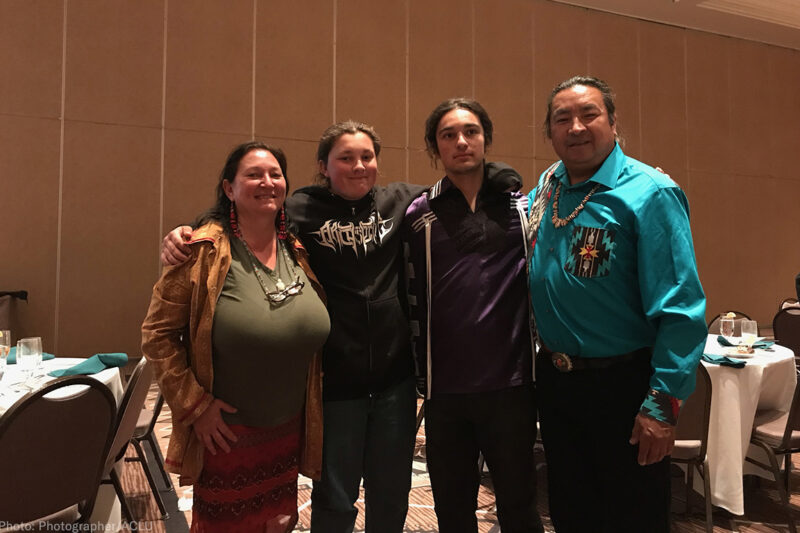 It’s not easy to accept that two of my sons are now nationally known, not for their sharp humor, musical talent, or academic achievements, but rather for the humiliation they recently endured on a campus tour. Moms are supposed to have all the answers, but it’s hard to explain why they, as Native Americans, were treated at a public university like they “don’t belong.”

So when Starbucks closed 8,000 stores last week to conduct a racial bias training, the news gave me hope, which is something that I’ve struggled with lately. I’m under no illusion that a four-hour session can fix racism. But I hope that more institutions, including colleges and universities, will take important steps to protect people of color from the consequences of white suspicion.

It’s been a month since the incident, but April 30, 2018, is a day that will live with me forever. I was worried from the start. My two sons, 17 and 19, were adamant about taking the seven-hour drive in our road-worn family car from our home in New Mexico all the way to Colorado State University in Fort Collins, where they were scheduled to attend a campus tour. I didn’t like that they’d be navigating miles of unfamiliar roads and unbearable Denver traffic alone. But they had worked hard to raise the travel money and CSU was their dream school, so I didn’t stand in their way.

They checked in with me every few hours as they went from Taos to Raton to Pueblo and beyond. When they finally reported in a text that they were on the tour, I was relieved: My boys were safe on campus. I would soon discover that I couldn’t have been more wrong.

Not long after receiving the text, I answered a frantic call from my older son. “Ista!” he said, (Ista is Mohawk for mother) “someone called the police on us because we were quiet!” No mother should have to hear what my sons told me over the phone — that campus police pulled them aside because a woman on the tour thought their shy demeanor and t-shirts were suspicious; that they were frightened and embarrassed by the interrogation; that the tour left them behind as they were being questioned; that they went back to the admissions office afterwards for help, only to be flippantly told, “There’s nothing we can do. You can do a self-guided tour if you want.”

As a Native American woman, I am part of a community that endures racial bias every day, and I resolved that this injustice would not go unnoticed. Several calls and a rant on Facebook later, my sons’ encounter with racial profiling went viral.

Critics wonder why I would blame Colorado State University for the actions of a campus visitor. But I challenge them to imagine being young, hours away from home, and confronted by campus police due to a ludicrous report from a stranger. Body cam footage shows that the tour guide led participants past the detained boys as if they were invisible. If I can’t trust staff at CSU to keep them safe and respect them for one hour, how can I trust them to ensure their safety and success for four years?

Of course, I am upset by the actions of the unnamed 911 caller. But I am also upset that the police officers didn’t address the tour guide to determine if my boys belonged on the tour. Going forward, the CSU administration should draw up guidelines for university employees on how to deal with teenagers or other people on campus who are on the receiving end of 911 calls that could be based on bias.

They should also consider the trauma that can ensue when young people of color are pulled off a campus tour and detained like criminals. After determining that my sons were wrongfully accused, unnecessarily detained, and unfamiliar with the campus, the least that the officers could have done as public servants was help them catch up to their group.

If our story had not received global attention, the 911 caller would have walked away proudly, feeling that she had done the right thing and saved their group from young men who didn’t belong. And CSU may have never started thinking of ways to protect people of color from 911 busybodies.

We are determined to stop dangerous actions like these by “nervous white people.” What happened at CSU could happen anywhere. What happened to my sons has happened to thousands of native people and other people of color for centuries. We feel it is our duty to take a stand and make the country aware that we’ve had enough.

The concept of “see something, say something” is often abused in America to target people who are simply existing in their skin. This bias must be checked. And institutions ranging from Starbucks to CSU can help. I particularly hope that universities — if they truly want to support inclusion — will do the work to keep other young people from experiencing what my boys did when they were 500 miles from home.

Have you had the police called on you for racist or inexplicable reasons? Share your story

From Starbucks to Yale, the stories of racial profiling that have hit the news recently are disturbing — but they’re not isolated incidents. If you’re a person of color who’s had the police called on you for inexplicable or racist reasons, share your experiences and ideas in the link above. We may use your story in an evolving collection that we will feature on our website.