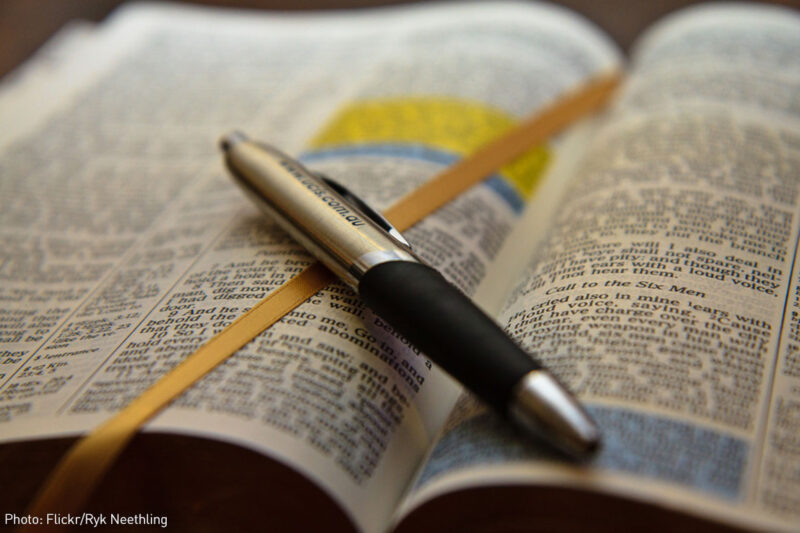 Idaho’s public school students may soon have an additional reference text in science class — the Bible.

Senate Bill 1342, which will be heard this week by the House Education Committee, would authorize the use of the Bible “for reference purposes” in any class where “an understanding of the Bible may be useful or relevant.” Of course, our courts have repeatedly made clear that instruction in the Bible and creationism is neither useful nor relevant nor constitutional in science class. But that didn’t stop the bill’s drafters from explicitly listing astronomy, biology, and geology among the courses into which teachers may incorporate the Bible.

The ACLU of Idaho opposed the bill in the Senate, pointing out that religious texts and beliefs about the origin of life have no place in science class. So, what was the “fix” offered by the Senate Education Committee? They deleted the bill’s references to astronomy, biology, and geology. They also amended the bill to provide that other religious texts could be used as well.

Neither of these cosmetic changes, however, fixes anything; they merely attempt to better mask the measure’s serious flaws. As amended, the bill still allows for teachers to use the Bible in “any topics of study” where a teacher personally believes it is “useful or relevant,” including science classes. And based on the bill’s original text and the current title of the relevant subsection, which remains — “USE OF THE BIBLE IN PUBLIC SCHOOLS” — we know that’s exactly what was intended all along.

Authorizing and encouraging teachers to incorporate the Bible into science classes not only shortchanges Idaho’s students, who deserve a sound science education that will prepare them for college, but it is also a violation of the separation of church and state.

Indeed, even in non-science classes, allowing teachers to incorporate the Bible or other religious texts into class on a whim — regardless of state educational standards and approved curricula — raises serious constitutional concerns. Without in-depth training from a non-religious source and appropriate teaching materials, such as those available for a comparative religion course, it is very likely that teachers will inject their personal beliefs into these lessons, resulting in the violation of students’ First Amendment rights and a real risk of costly litigation for schools.

Unfortunately, the Idaho Senate has already passed the amended bill. But hopefully, as members of the House Education Committee consider the bill this week, they will take a much closer look and conclude, as we have, that Senate Bill 1342 is no gem.