Indigenous Students Should Be Allowed to Wear Tribal Regalia at Graduation 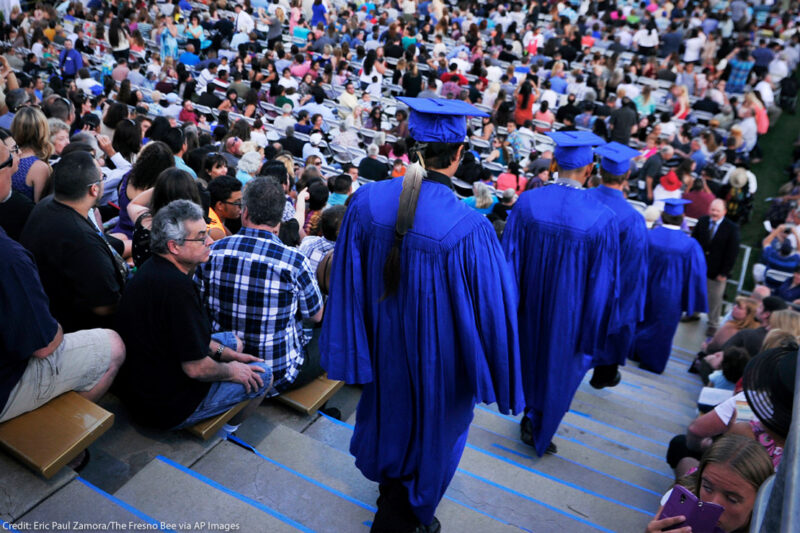 Graduation should be a joyful occasion for high school seniors. But for some Indigenous students, this special time of year can be fraught with uncertainty or controversy over their ability to wear tribal regalia during their schools’ commencement ceremonies. Whether an eagle feather or plume, beadwork, sealskin cap, moccasins, or other forms of traditional dress, tribal regalia plays a unique role for graduating Indigenous students. These items are often gifted to students by parents or tribal elders in recognition of this pivotal, once-in-a-lifetime achievement. Many Indigenous students believe that graduation from high school cannot be properly or fully celebrated, from a spiritual and cultural perspective, unless they are permitted to wear certain ceremonial regalia.

Nevertheless, some schools prohibit Indigenous students from wearing these items at graduation, claiming that it would violate the school’s dress code and speculating, without any basis, that it would disrupt during the ceremony. Today, in a letter to the U.S. Department of Education, we asked officials to take action before the upcoming graduation season to ensure that Indigenous students’ rights of cultural and religious expression are protected.

Indigenous students have long been mistreated and disadvantaged in educational settings. For example, the Indian Civilization Act of 1819 and other federal laws enacted through the 1960s allowed the U.S. government to establish Indian boarding schools across the country. As Deb Haaland, Secretary of the Interior, explained last year, “the purpose of Indian boarding schools was to culturally assimilate Indigenous children by forcibly relocating them from their families and communities to distant residential facilities where their American Indian, Alaska Native, and Native Hawaiian identities, languages, and beliefs were to be forcibly suppressed.”

Even though these schools are no longer in operation, Haaland recognized that their legacy remains, “manifesting itself in Indigenous communities through intergenerational trauma, cycles of violence and abuse, disappearance, premature deaths, and other undocumented bodily and mental impacts.” And the reach of that horrific legacy today is evident by the numerous barriers that Indigenous students face in making it through the educational system. For a variety of historical and systemic reasons, Indigenous students are much less likely to graduate from high school than their non-Indigenous peers.

Policies that further strip Indigenous students of their cultural and religious heritage in the name of assimilation, such as those prohibiting tribal regalia at graduation, only compound the violence and oppression that these students and their communities have suffered. Students who have resisted these dictates have had their sacred items confiscated or have been excluded from graduation altogether. While a handful of states have passed laws in response to these restrictions, the protections do not always apply to all Indigenous students, and many students still struggle to exercise their rights.

More must be done at the federal level to protect Indigenous students’ rights. Given the federal government’s past abuse of Indigenous students in the educational context, the Department of Education has a special obligation to address ongoing deprivations of these students’ educational and expressive rights. Officials have tools at their disposal to remind schools of their legal obligations and to investigate schools that do not comply.

Specifically, the Department of Education’s Office of Civil Rights is charged with enforcing Title VI of the Civil Rights Act of 1964, which prohibits both intentional discrimination and rules that have a discriminatory effect, even if unintentional, on the basis of race, color, or national origin in any school program or activity receiving federal financial assistance. As we explain in our letter, purportedly “neutral” graduation dress codes will often have a disproportionate and discriminatory effect on Indigenous students.

While Title VI’s protections will not apply in every situation, many schools seem unaware that policies denying Indigenous students the right to wear tribal regalia during graduation ceremonies could violate this federal law. Thus, we are asking the Department of Education to notify qualifying schools, via written guidance or some other mechanism, that they must remain sensitive to the rights of Indigenous students as graduation approaches, and we are urging officials to immediately investigate any complaints from seniors whose schools prohibit wearing tribal regalia at graduation.

Indigenous students already face enough obstacles. They should be able to celebrate their graduation while remaining true to their cultural and religious heritage.