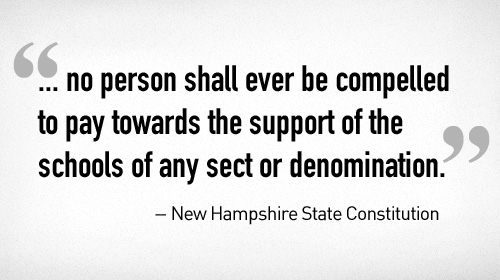 Thirty million. That’s the amount of tax dollars that could be diverted annually from New Hampshire’s coffers to private schools by the year 2022 if the state is allowed to implement its new Education Tax Credit Program. Under the tax credit program, in exchange for donations to “scholarship organizations,” New Hampshire businesses will receive tax credits equal to 85 percent of the amount they donate. The scholarship organizations, in turn, will use the funds to award scholarships to private school students, including those attending religious schools. In short, rather than paying their taxes to the state, businesses will instead be able to direct money owed to the state toward religious education.

By 2033, the total could grow as high as $300 million annually. Because the vast majority of that government aid would go to private religious schools, which are free to use the funds for religious discrimination and indoctrination, the ACLU and New Hampshire Civil Liberties Union, along with Americans United for the Separation of Church and State, filed a lawsuit today in state court seeking to halt implementation of the program.

In the first year alone, the Department of Revenue Administration is authorized to award up to $3.4 million in tax credits, and in subsequent years, the amount of taxes due to the state that can be diverted to private schools could increase by up to 25 percent annually. As public school students receive scholarships and enroll in private schools, public school districts – which have already faced substantial budget cuts throughout New Hampshire – will also suffer, losing state aid awarded on a per-pupil basis.

If the tax credit program sounds familiar to you, you’re not alone. Civil rights and public education advocates quickly recognized the New Hampshire scheme and similar proposals across the country for what they are: a new spin on the classic school voucher program, or back-door school vouchers. And not surprisingly, tax credit programs like New Hampshire’s have all the same defects as traditional voucher plans.

Most relevant to the lawsuit filed today, the New Hampshire tax credit program, like school vouchers, violates the strict separation of church and state mandated by the New Hampshire Constitution. The state constitution specifically provides that “no person shall ever be compelled to pay towards the support of the schools of any sect or denomination” and that “no money raised by taxation shall ever be granted or applied for the use of the schools or institutions of any religious sect or denomination.” Thus, whatever supporters decide to call government aid to private religious schools – vouchers, tax credits, or something else – the New Hampshire courts should need only one word to describe such schemes: unconstitutional.