Senators Must Hold Mike Pompeo Accountable For His Religious Prejudice 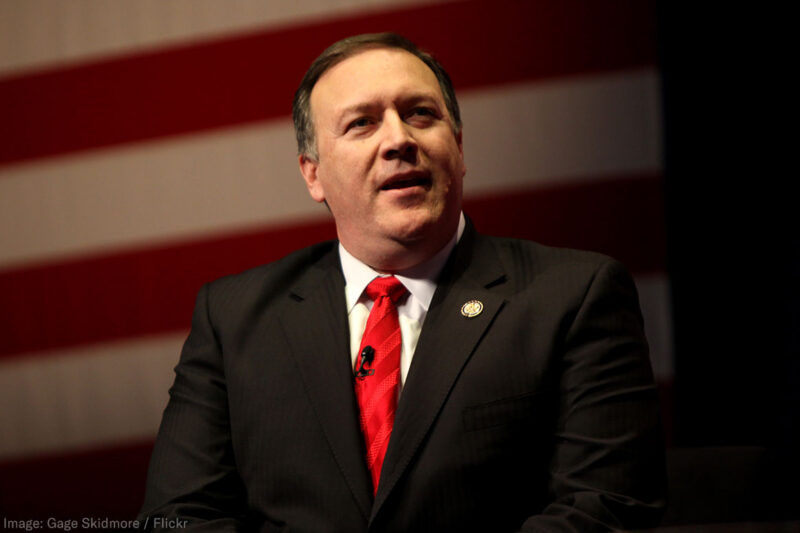 Following his campaign where he declared that “Islam hates us” and vowed to ban Muslims from entering the country, President Trump was quick to bring people who shared his hostility toward Muslims into his administration. Current and former officials like Steve Bannon, Sebastian Gorka, Mike Flynn, Ben Carson, Frank Wuco, Jon Cordova, and Carl Higbie have all expressed anti-Muslim views, something Trump likely considers to be an asset.

Another appointee with a long and troubling record of animosity toward Muslims, CIA Director Mike Pompeo, is now receiving a promotion to replace Rex Tillerson as secretary of state, as Trump announced earlier this month.

Before leading the CIA, Pompeo was a member of Congress, where he used his position to smear Muslims as a threat not only to security but also to Christianity — promoting the idea that religions are at war with each other and undermining our nation’s values of religious freedom and pluralism.

In one speech, he read a prayer that lamented that America “worshiped other gods and called it multiculturalism and endorsed perversion and called it an alternative lifestyle,” appearing to show disdain for the country’s religious diversity.

He also lashed out at Muslim leaders by falsely claiming that they refuse to denounce violence, warning that they could be considered “potentially complicit” in attacks like the Boston Marathon bombing. While running for his seat, Pompeo even promoted an article ridiculing his Indian-American campaign rival as a “turban-topper,” for which he eventually apologized.

Then-congressman Pompeo partnered with groups well known for their religious bigotry and discriminatory policies like ACT for America and the Center for Security Policy. In 2015, Pompeo was interviewed by Frank Gaffney, the president of CSP and an activist who promotes conspiracy theories that there are secret Muslim plots to take power over everything from the Missile Defense Agency to the internet. Pompeo agreed with Gaffney’s baseless statement that President Obama has “kind of an affinity for, if not the violent beheading and crucifixions and slaying of Christians and all that, but at least for the cause for which these guys are engaged in such activities, the raising up of the Muslim Ummah.” Pompeo said, “Frank, every place you stare at the president’s policies and statements, you see what you just described.”

With the State Department involved in refugee determinations, it is extremely troubling that Pompeo co-sponsored a bill to effectively ban all refugees from resettling in the U.S. and praised Trump’s xenophobic presidential campaign.

While the ACLU does not take a position on nominees, we believe nominees to the highest offices of government must uphold the law — which includes upholding religious freedom and preventing discrimination. Senators must hold Pompeo accountable for his hostility toward Muslims in America and around the world, and ensure that such religious bigotry has no place in shaping State Department policies.

The Senate will have to decide whether someone who has repeatedly attacked a whole religious community both at home and abroad — including some of the closest and most important allies of the United States — is fit to serve as the chief diplomat of the United States. The State Department was rocked by Tillerson’s yearlong purge of senior career diplomats and his pulling back from human rights advocacy. The Senate must weigh the extent of damage to human rights that could be caused by confirming a person with a long record of falsely demonizing a religion and its adherents.