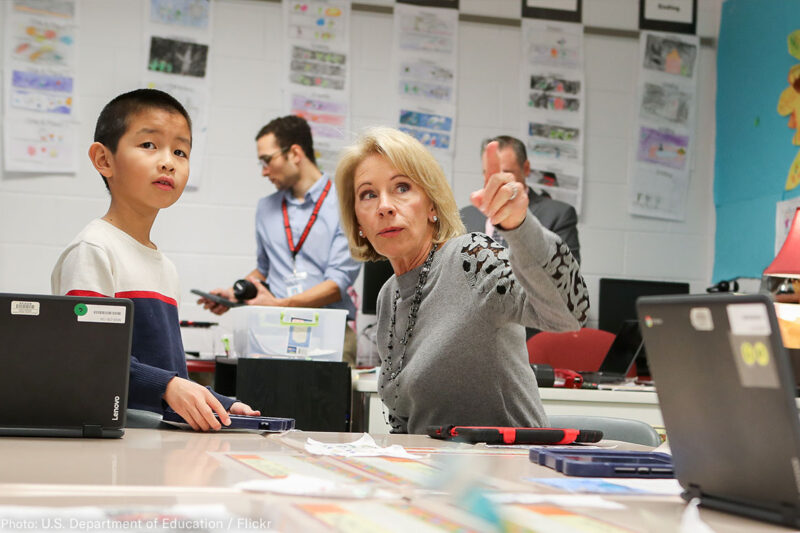 Indiana has one of the most expansive private school voucher programs in the country, courtesy of Mike Pence. During his time as governor, Pence “removed the cap on the number of students who could qualify for a voucher to a private school, increased the limits on qualifying family income, and removed [a] stipulation that the student had to try the public school first,” according to a searing analysis of the state’s school choice failures by The Washington Post yesterday.

Last year alone, Indiana taxpayers financed private school education — nearly all religious — to the tune of $146.1 million “with most of it going to families who would have sent their children to private school anyway.” Oh, and by the way, a 2017 study of Indiana students in grades 3-8 who actually did use the voucher to transfer from a public to a private school showed that the voucher program had a negative impact on students’ academic achievement.

Those are the type of important details you didn’t hear or read last week from voucher proponents who dubbed the week, “National School Choice Week.” President Trump issued an official proclamation recognizing the “celebration,” while school choice supporters, such as Secretary of Education Betsy DeVos and Pence, wrote op-eds and deluged social media with platitudes about empowering parents and helping children achieve the “American dream.” There’s no question that parents should feel empowered when it comes to their child’s education, or that every student should be positioned to pursue their dreams, but that is not what the “school choice” movement is really about.

Rather “school choice” is a catch-all phrase that covers a variety of efforts to effectively privatize public education by diverting public education funds to private sources. It includes home schooling, charter schools, and virtual education, but it is mostly code for private school vouchers and similar programs, such as education savings accounts and tax credit scholarship programs. The school choice movement has been around for decades, working to expand its reach school district by school district and state by state.

With the election of President Trump and Vice President Pence and the appointment of Secretary DeVos, the movement has received an alarming boost. But it’s not the panacea that Trump and others claim. And privatizing public education in this way has serious consequences for students, civil rights, equality, and religious liberty.

Studies of voucher programs in Louisiana, Ohio, and Milwaukee, among others, likewise found negative or negligible impacts on students’ academic performance. Indeed, a Wall Street Journal analysis of Milwaukee’s program, published yesterday, found that “vouchers worked best when enrollment from voucher students was kept low.” However, “[a]s the percentage of voucher students rises, the returns diminish until the point when there is little difference between the performance of public and private institutions.” And, “[t]he vast majority of private schools participating in the program today have high percentages of publicly funded students.”

In other words, to be even mildly successful, voucher programs will not be able to assist all students. They cannot be the cure-all that proponents promise because the more voucher students a school takes on, the greater the negative impact on students’ academic performance.

Civil rights protections are also undermined by school voucher programs. Private voucher schools do not have the same obligations as public schools under federal law to protect students from harassment and discrimination. Unlike public schools, private voucher schools can discriminate against students based on their religion, LGBT status, disability, academic achievement, and disciplinary history. In fact, according to a 2016 report issued by the Government Accountability Office, only four voucher programs across the country required private schools to accept all students with vouchers, space permitting. Students in voucher schools also lose key First Amendment rights, due process rights, and other rights protected by the U.S. Constitution in public schools.

Accountability is virtually non-existent in many of these voucher programs, increasing the risk that the few rights retained by voucher students will be violated, that taxpayer funds will be mismanaged, and that the quality of the education provided by the school will be inferior. For instance, many voucher schools that receive taxpayer funds are not required to meet any standards for teacher qualifications, testing, or achievement. In some states, private school teachers need not even have a bachelor’s degree, and only 11 states require that voucher schools be accredited, meaning that voucher funds are often used to pay for tuition at unaccredited schools.

Many voucher schools, moreover, are religious. Schools not only discriminate against students and employees based on religion and other grounds, as noted above, but they also do not have to meet the same curricular requirements that public schools do. Many religious voucher schools, for example, teach creationism in science class. They also incorporate religious worship into the curriculum in the form of chapel, daily prayer, or daily scriptural readings and infringe upon basic principles of religious liberty by providing public funds for sectarian proselytizing.

These are just some of the facts about vouchers and school choice that President Trump, Vice President Pence, and Secretary DeVos won’t tell you. We’ll continue to shine a light on how these programs fail students and undermine our public schools as proponents push them without regard to their effects on students’ academic performance, civil rights, and religious liberty.