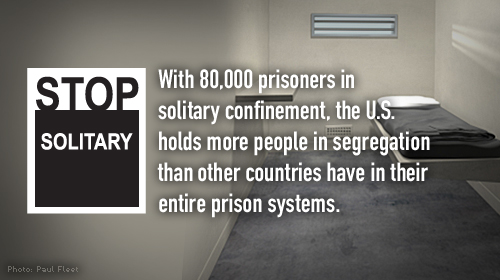 The world will get a glimpse this week into how the United States treats those we lock in solitary confinement, when the Inter-American Commission on Human Rights hears ACLU testimonies on how our treatment of vulnerable prisoners violates international human rights norms. The short story: we should be ashamed. For a more detailed picture, check back throughout the week for an ongoing blog series on the issue.

Both domestically and abroad, there is an increasing recognition of the negative effects of prolonged solitary confinement – yet this harmful practice still occurs in our own backyard.

Today the Inter-American Commission on Human Rights (IACHR) will hear testimony on the overuse and harmful effects of this practice in the Americas. Starting at 11:30 a.m., the ACLU will testify about solitary in the United States and, with Human Rights Watch, on the solitary confinement of kids in adult jails and prisons. Other organizations, including the Center for Constitutional Rights and Physicians for Human Rights, have submitted testimony to the IACHR urging the Commission to review the use of solitary confinement in the United States.

While the hearing is taking place, 80,000 prisoners will be suffering in solitary confinement settings. This means that tens of thousands of prisoners’ chances of rehabilitation will be diminished. Languishing in solitary, they will experience negative psychological effects, such as depression and hallucinations. While this hearing is taking place, American prisons will continue to engage in this egregious affront to human rights on our own soil.

Other posts in the series: