Another Day, Another 124 Violent SWAT Raids 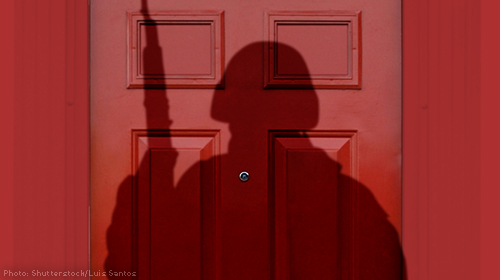 It’s 3:00 a.m. Your children are screaming and your dog is lying dead in a pool of blood. Scorch marks and shattered glass cover the floor. You’re being held at gunpoint by towering figures wearing black and holding AK-47s.

This isn’t a Hollywood movie set. Odds are this is a predawn SWAT raid targeting a family of color. Mission objective: search the home for a small amount of drugs.

There are an estimated 45,000 SWAT raids every year. That means this sort of violent, paramilitary raid is happening in about 124 homes every day – or more likely every night – not in an overseas combat zone, but here in American neighborhoods. The police, who are supposed to serve and protect communities, are instead waging war on the people who live in them.

Our new report, War at Home: The Excessive Militarization of American Policing, takes a hard look at 800 of these raids – or at least what state and local law enforcement agencies are willing to tell us about them. We found that almost 80% of SWAT raids are to search homes, usually for drugs, and disproportionately, in communities of color. During these drug searches, at least 10 officers often piled into armored personnel carriers. They forced their way into people’s homes using military equipment like battering rams 60 percent of the time. And they were 14 times more likely to deploy flashbang grenades than during SWAT raids for other purposes.

Public support for the failed War on Drugs is at its lowest ever, and yet police are still using hyper-aggressive tactics and heavy artillery to fight it. This paramilitary approach to everyday policing brutalizes bystanders and ravages homes. We reviewed one case in which a young mother was shot and killed with her infant son in her arms. During another raid, a grandfather of 12 was killed while watching baseball in his pajamas. And we talked with a mother whose toddler was covered in burns, shot through with a hole that exposed his ribs, and placed into a medically induced coma after a flashbang grenade exploded in his crib. None of these people was the suspect. In many cases like these, officers did not find the suspect or any contraband in the home.

Even if they had found contraband, the idea of cops-cum-warriors would still be deeply troubling. Police can – and do – conduct searches and take suspects into custody without incident, without breaking into a home in the middle of the night, and without discharging their weapons. The fact is, very few policing situations actually require a full SWAT deployment or a tank. And simply having drugs in one’s home should not be a high-risk factor used to justify a paramilitary raid.

We can no longer accept such brutal tactics as a routine way to fight the War on Drugs. It’s time for an exit strategy.

Our report showed that only very rarely – 7% of the time – were heavily armed SWAT teams used for their original purposes: hostage and barricade situations. Part of the explanation for this boom in inappropriate uses of SWAT can be explained by the fact that the Departments of Defense, Homeland Security and Justice are funneling billions of dollars to state and local law enforcement agencies every year to help them purchase military weaponry and equipment. The feds hold the purse strings, and they need to stop incentivizing tactics that erode trust in law enforcement and undermine public safety. Also, states need to put restrictions on the use of SWAT – such aggressive and dangerous force should only be used in cases where it’s truly necessary to save a life.

It’s time for the police to remember that our neighborhoods are not warzones and they shouldn’t be treating us like the enemy.

We’re not alone in calling for an end to excessive police militarization. Check out just a few of the other voices urging reform: