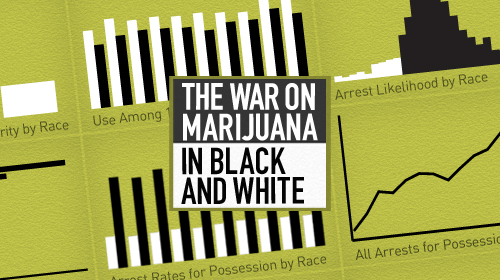 Marijuana has become the drug of choice for police departments nationwide. According to The War on Marijuana in Black and White, released today, police made over 8 million marijuana arrests between 2001 and 2010, and marijuana arrests now account for half of all drug arrests in America. Almost 90% of these are for possession – which means that thousands of people have been unnecessarily ensnared in our criminal justice system just for having marijuana.

Let’s begin with the backstory. Over the last twenty years, police have turned much of their zeal for fighting the misguided War on Drugs towards the enforcement of marijuana laws in communities across the country. And like America’s larger War on Drugs, America’s War on Marijuana has been a failure. Despite being a priority for police departments nationwide, the aggressive enforcement of marijuana laws has not diminished the use or availability of marijuana; in fact, use has increased.

How is this failed War on Marijuana impacting our communities?

Over-criminalization. In 2010, cops made one marijuana bust every 37 seconds. Once ensnared in the criminal justice system, people can lose their liberty, money, time, jobs, public benefits, child custody, drivers’ licenses and student aid, and can be deported. Click here for stories from real people whose lives have been derailed by marijuana arrests.

Wasted Time and Money. If current trends continue, states will spend over $20 billion enforcing marijuana laws over the next six years – money that could have been otherwise invested in our communities to enhance public health and safety, public schools, drug treatment programs, and police-community relations. Click here to learn more about the numbers behind the failed War on Marijuana.

Unacceptable Racial Bias. Marijuana usage rates are comparable among Blacks and whites, yet Blacks are over 3.7 times more likely to be arrested for marijuana possession. Watch this video for more on racial bias in marijuana arrests.

The aggressive enforcement of marijuana possession laws needlessly mires hundreds of thousands of people in the criminal justice system, crowds our jails, wastes billions of taxpayers’ dollars, fails to reduce marijuana use and availability, diverts precious police resources away from solving serious crimes, and is carried out with staggering racial bias.

It’s clearly time to end the failed War on Marijuana.

I’ll be hosting a Twitter Chat with Russell Simmons (@UncleRUSH) at 1:00pm EST today to talk more about the report and the need for marijuana reform. Join me (@EzekielACLU) using #weedreform.