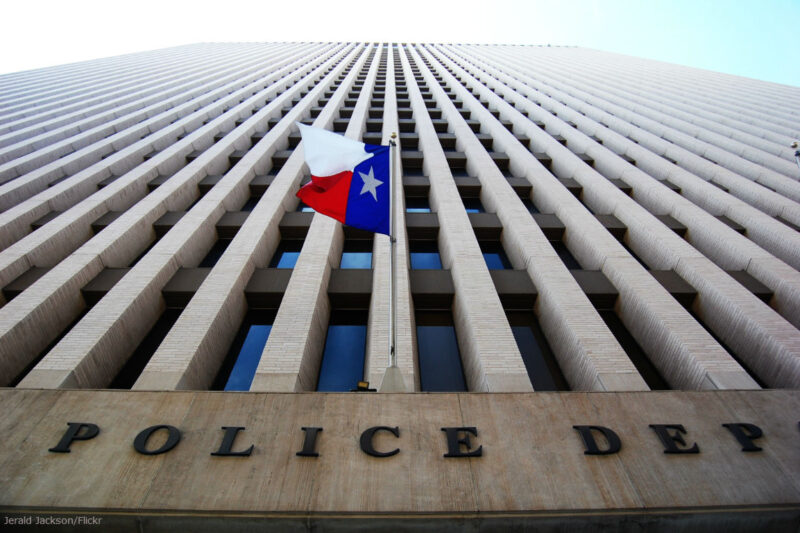 Tomorrow, March 5, marks the beginning of the annual Great Texas Warrant Roundup. It sounds like quite a lot of fun, another cowboy extravaganza from a state famous for its stock shows and rodeos.

But what it is, in practice, is a shakedown of Texas’s working poor.

The Great Texas Warrant Roundup is an annual statewide collaboration of courts and law enforcement agencies. Their goal is to collect payment of overdue fines and fees from Texans who have outstanding warrants for unpaid traffic tickets and to arrest and jail those who can’t pay. What little press is dedicated to the Roundup focuses on praising cities for the so-called “amnesty” period that precedes it.

The state’s unreasonable traffic ticket scheme and the devastation it can wreak on low-income Texans receive considerably less attention.

Depending on the jurisdiction, a ticket for failing to signal a lane change — the trooper’s justification for Sandra Bland’s tragic traffic stop — will cost you around $66. But the state tacks on $103 in court costs and a host of fees, some bordering on Kafkaesque. Texas will charge you a public defender fee, even though courts refuse to appoint a public defender for traffic ticket cases. If your fine is already too expensive to afford, Texas charges a fee to put you on a payment plan. You’ll even pay an “administrative fee” for the privilege of handing money over to the court. For people who are too poor to pay their traffic fines, a $66 fine can balloon to over $500 because of these court costs and fees, as well as late fines and warrant fees when towns try to arrest the poor (at times illegally) to collect money they simply do not have.

When people like Valerie are arrested in the coming warrant roundup, judges across Texas will follow their usual plan of demanding a payment in exchange for liberty.

If you can’t afford to keep up with these fees, the state will suspend renewal of your driver’s license (add another $30 for the License Renewal Suspension Fee), and you’ll be unable to register your car, making it illegal for you to drive to the job you need to take care of your kids and pay off your spiraling debt. An expired registration means you’re certain to be pulled over and put back at square one, with new tickets, new fines, new fees, and no hope.

Case in point: Valerie Gonzales, one of the original plaintiffs represented by the Texas Fair Defense Project in a class action lawsuit against the City of Austin. Valerie is a 31-year-old mother of five children with disabilities. She and her family live in poverty. After receiving two traffic tickets nine years ago, not only had Valerie’s tickets multiplied and her fines ballooned into the thousands of dollars, she lost a job after she was unconstitutionally jailed without the benefit of a court-appointed attorney.

When people like Valerie are arrested in the coming warrant roundup, judges across Texas will follow their usual plan of demanding a payment in exchange for liberty. Without asking questions about financial circumstances, judges literally order people to turn over all the money they happen to be holding when they are arrested. “Give me what’s in your pockets” is not a phrase that should be uttered in a courtroom. What’s worse, when the working poor don’t have enough money to hand over, judges send them to jail without a fair hearing or a second thought.

Jailing people for debt is both unjust and profoundly counterproductive. Not only does it deprive people of their liberty and separate them from their children and families, it also renders them incapable of paying off their fines and costs the taxpayer (by conservative estimates) $51 per person per day of incarceration. It’s in everyone’s best interests to keep Texans with their families and out of jail.

There are sensible alternatives. Courts can consider ability to pay before assessing unmanageable fines or waive debts for people who have made a genuine effort to pay what they can. So why don’t they?

This is what makes the roundup so nefarious. Courts are hoping that the threat of jail will frighten people into turning over whatever they can scrape together in exchange for protection from arrest. Rather than praising amnesty, we should address the systemic injustices that keep low-income Texans in perpetual debt to the state.