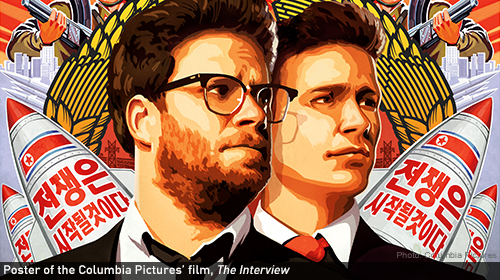 Update (1/21/15): The federal court hearing on the release of the torture photos, originally scheduled for yesterday, has been rescheduled for February 3.

In France and the United States, there seems to be near-universal agreement that to self-censor because of threats of violence is unwise and cowardly. The slogan “Je Suis Charlie,” which millions adopted in the wake of the Paris attacks, meant different things to different people, but its core, defiant message was that terrorists shouldn’t get to decide the boundaries of our political debate.

This was also the perspective of many Americans when, at the end of last year, a mysterious group said to be associated with North Korea threatened to wreak havoc if Sony didn’t cancel “The Interview,” a comedy about a plot to assassinate Kim Jong-un. Political leaders of both national parties criticized Sony for withdrawing the film. Some particularly outraged Americans urged their fellow citizens not just to watch the film but to pay for the privilege on the theory that their doing so would convey an appropriate message to the dictator. President Obama weighed in, too, saying, “we cannot have a society in which some dictator someplace can start imposing censorship here in the United States.”

And so it is more than disappointing that this afternoon the Obama administration will appear in federal court to explain that hundreds of photographs depicting the abuse and torture of prisoners in U.S. military facilities must be suppressed because of the possibility that their release will provoke violence.

The administration has explained its position in a series of legal briefs—most recently this one, which happens to have been filed on the same day that President Obama declared that Sony’s decision to withdraw “The Interview” was “a mistake.” The brief contends that the torture photographs should be suppressed because they would be used as propaganda by terrorist organizations; “intensify existing resentment and emotional fervor” among populations that are already ill-disposed towards us; be used by our enemies as “evidence of the United States’ noncompliance with . . . basic standards of a humane and civilized society;” and perhaps even lead to violent attacks—by ISIS, al Qaeda, or others—against American soldiers or civilians overseas.

This is not a good argument for the suppression of the photographs. The same kind of argument could as easily have been made with respect to the Abu Ghraib photos, the Rodney King video, or the Eric Garner video. It could as easily have been made with respect to the Senate’s torture report—and, in fact, it was. And it’s not just that the argument gives those who threaten violence a veto over political debate; it gives the government a veto, too. To accept the argument, at least in the absence of a specific, credible threat directed against specific people, is to give the government far-reaching power to suppress evidence of its own misconduct. And the worse the misconduct, the stronger would be the government’s argument for suppression.

This afternoon’s hearing will focus on the torture photographs, but there’s no reason at all to think that the government believes these photographs are unique in their potential to incite violence. The government made the same argument in another court to defend the suppression of videos showing the force-feeding of prisoners at Guantanamo. A few years ago it made the same argument to justify the suppression of a photograph of Abu Zubaydah taken at a CIA black site. The argument the government is making—the argument it will defend this afternoon—simply lacks any limiting principle.