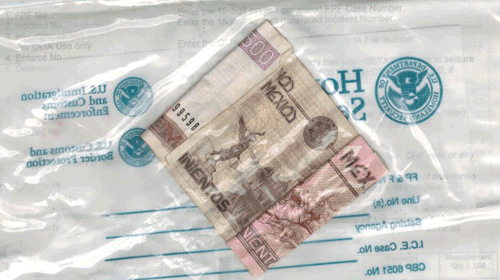 One of the cornerstones of American law is the right to property. That protection, however, doesn’t seem to apply if you’re a migrant.

A report released this week by the Tucson-based humanitarian organization No More Deaths details the Border Patrol’s and other law enforcement agencies’ common practice of permanently confiscating the money and other belongings – including IDs, cellphones, medicines, and personal keepsakes – of those in its custody without due process of law. These practices, says the report, continuously put thousands of deported migrants into harm’s way.

Take, for example, what happened to Alejandro.

He was detained by Border Patrol agents who confiscated his belongings – $226.24 in cash, a cellphone, a change of clothes, and even his Mexican voter ID card. After serving 60 days in jail, Alejandro was placed on a bus at 3:00 a.m. with a group of people also being deported to Mexico. The bus was supposed to stop and pick up their belongings from Border Patrol, but it never did. Alejandro found himself on the street in Mexico in the middle of the night, with only the clothes on his back. He appealed to the Mexican consulate for help and was told that if his belongings had not been destroyed already, it would take at least three months to recover them. Alone and destitute in an unfamiliar town, he had to fend for himself.

Other migrants reported outright theft of their money by authorities. Manuel was detained by Border Patrol while crossing the border near Douglas, Arizona, and turned over to U.S. Marshals who confiscated$360. The one who took the money told Manuel not to expect it back because he planned to use it to buy beer over the weekend. Several other detainees heard the comment and protested, but Manuel never saw his money again.

In some respects, the findings and stories from this report are not new. In fact a 2013 report by the University of Arizona estimated that fully one in three people deported from the U.S. are removed without having their property returned to them by Border Patrol. The rate increases to more than 50 percent under Operation Streamline, a program in certain southwest border districts that requires federal criminal prosecution and imprisonment of illegal border crossers, who often spend time in jail before their deportation.

The consequences of the loss and sometimes theft documented in the current report can be devastating – individuals can be deported to unfamiliar border towns without money, identification, or other belongings. They become extremely vulnerable to violence and exploitation at the hands of corrupt officials, human traffickers, and drug cartels.

Julio, a DEA informant who sought asylum in the U.S. with his family after members of a drug cartel in Nogales tried to kill him, is one example. His wife and children were released into the U.S., but he was detained and told that if he pursued asylum he would remain in detention, separated from his wife and children for years while his case was pending. Desperate to be with his family, Julio agreed to voluntary departure, asking only that he not be deported to Nogales, where the cartel had tried to kill him. His request was ignored, and he found himself in Nogales, fearing for his life. The money his family sent while he was detained had been converted to a debit card that did not work in Mexico, so Julio had no means to flee Nogales. His money was never recovered.

The practices also raise serious legal concerns from an international human rights perspective and under U.S. law. What procedures the Border Patrol does have in place are inconsistently followed and are fundamentally inadequate. Individuals detained and deported without their belongings generally do not have adequate notice or any meaningful opportunity to prevent the permanent confiscation of their belongings, as required by law.

The report’s findings are also consistent with numerous instances of Border Patrol violating the due process rights of those in its custody, as reports and recent civil lawsuits by the ACLU have shown.

For example, the ACLU just released its own report revealing that 83 percent of individuals deported never see a judge or receive a hearing, including many asylum seekers who are deported directly into harm’s way. Multiple lawsuits have also been filed by the ACLU to protect women and children’s due process rights and access to attorneys. Recently a lawsuit was settled over the Border Patrol’s widespread practice of coercing individuals into signing voluntary removal orders when they might have had access to immigration relief. And finally, the ACLU is now representing thousands of immigrants who languish in prison because they are not given timely interviews about their stated fear of deportation to their home countries.

Now add to this list the latest findings from No More Deaths – Border Patrol’s systematic deprivation of personal property from vulnerable migrants – and the picture that consistently emerges is of an agency operating as if it were above the law. Clearly, these findings reflect much broader problems, including the Obama administration’s continuing failure to respect due process rights and investigate the Border Patrol’s notorious culture of abuse and impunity.

To see the report by No More Deaths, click here.