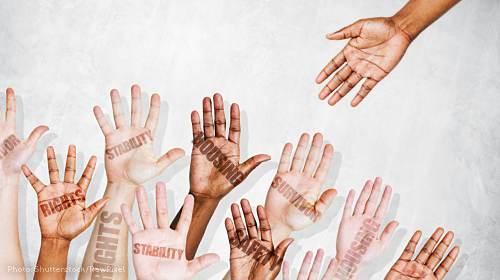 No one should be afraid to call 911 when facing danger in their home.

Yet, across the country, towns and cities have passed local laws – often called nuisance or crime free ordinances – that punish property owners and push for eviction of their tenants when residents seek police and emergency aid. Such laws treat crime victims as a nuisance and leave them with an impossible choice: endure threats or violence without police protection, or call 911 and risk homelessness and even greater vulnerability.

A new Pennsylvania law, however, now promises respite from this kind of catch-22, which all too often leads domestic violence victims to remain in unsafe housing for fear of being evicted.

This was precisely the dilemma faced by Lakisha Briggs, a resident of Norristown, Pennsylvania, when the police responded to her home for reported domestic violence. Though they arrested her abuser, the police then told Ms. Briggs that two more calls for help would result in her eviction under a local ordinance.

After this, Ms. Briggs was terrified to call the police despite repeated and escalating attacks by her ex-boyfriend. She even begged her neighbors not to call 911 after she was stabbed in the neck with a piece of glass. Thankfully, each time someone else called for life-saving assistance. While Ms. Briggs survived, Norristown affirmed her fears and aggressively sought her eviction.

Last year, the ACLU filed a federal lawsuit on behalf of Ms. Briggs to challenge the ordinance. In response to arguments that it violated the Constitution and federal law, Norristown repealed the law and settled the lawsuit, paying $495,000 to Ms. Briggs and her attorneys and agreeing not to pass a similar ordinance. Other Pennsylvania cities, including Mount Oliver and Forest City, also recognized the negative impact of these ordinances and repealed them after advocacy from the ACLU and other allies. But Ms. Briggs’ story remains far from unique, and the burden has fallen on domestic violence victims to come forward with stories of evictions and violence to prompt this change.

Until today, that is.

Responding to widespread attention on the perverse consequences of these ordinances, lawmakers in Pennsylvania took an important stand and unanimously enacted legislation to ensure that no one facing danger in their home will be penalized for calling 911. This morning, Gov. Tom Corbett signed that bill, providing protection for any resident, tenant, or landlord who faces penalty under a local ordinance because police or emergency services were called or responded to a situation where intervention was needed in response to abuse, crime, or an emergency. Callers who reasonably believe emergency response is necessary to prevent such an event are also covered. The law also authorizes residents and landlords to seek remedies in court against any municipality that violates these protections.

While this legislation is a vital step forward, municipalities across the country are increasingly enacting and enforcing nuisance ordinances. Most municipalities fail to consider the risk that these ordinances will deter people from reporting crime, further endangering crime victims and undermining public safety as a whole. Nor do they consider the devastating and disproportionate impact these laws have been shown to have on victims of domestic violence and communities of color.

The federal government, however, has taken notice. The U.S Department of Housing and Urban Development (HUD), recognizing nuisance ordinances as a fair housing issue, filed a separate complaint against Norristown. After pushing for repeal of the ordinance with the ACLU, HUD entered a conciliation agreement that requires training and ongoing monitoring of Norristown’s activities.

These actions by the federal government send an important message: enforcement of similar ordinances may violate civil rights laws and could result in the loss of HUD funding. But state legislatures also must take action.

Pennsylvania has led by example and now joins Minnesota in passing legislation that affirmatively protects tenants’ right to call the police. Earlier this year, the New York Assembly unanimously approved a bill that would establish the most comprehensive state protections yet. The full New York Senate did not take a vote on the bill before its term ended, but the ACLU, domestic violence advocates, and many others voiced their support and will continue to advocate for the bill in the upcoming legislative session.

While Pennsylvanians no longer have to choose between safety and housing, access to police and housing security should not depend on where you live. State and municipal lawmakers across the country should act to ensure that local laws do not undermine victim safety by punishing crime victims for violence perpetrated against them.

The ACLU wants to hear from anyone who has been affected by these ordinances, including landlords, tenants, fair housing and domestic violence advocates. If you have a story to share, please fill out oursurvey.