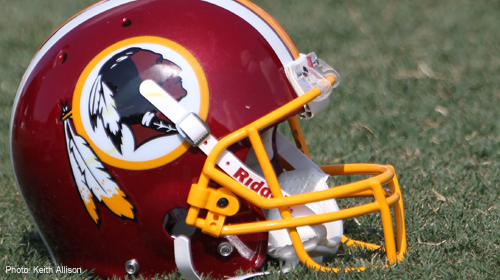 The Washington Redskins is a name that is offensive and perpetuates racism against Native Americans. Should it be changed? Yes. But should the government get to make that call? As we told a federal district court yesterday, the answer is no, because the First Amendment protects against government interference in private speech.

Nevertheless, the government has indeed weighed in. Last June, the U.S. Patent and Trademark Office cancelled the football team’s federally registered trademark, which it deemed disparaging to Native Americans. We don’t disagree with that judgment, but the government should not be able to decide what types of speech are forbidden – even when the speech in question reflects viewpoints we all agree are repellent.

The team took the case to court, and the ACLU filed an amicus brief yesterday, alongside the ACLU of Virginia and NYU Tech Law & Policy clinic, arguing that the government cannot constitutionally deny trademark benefits on the basis of speech that it disagrees with or finds controversial. Our brief is on behalf of the First Amendment, not the Redskins. The ACLU has joined the loud chorus of people and groups calling on the team to change its name (we side with the Dude from “The Big Lebowski” on this one), but the government should not have the power to make decisions about which trademarks are too “immoral,” “scandalous,” or “disparaging” to be given trademark protection.

Unfortunately, a problematic trademark law, the Lanham Act, gives it that very power.

Perhaps unsurprisingly, these vague terms have led to a host of arbitrary decisions about what is “immoral” or “scandalous,” leading to the inconsistent policing of speech. This results in the Trademark Office deciding that while it is permissible to register “Wanker” for beer, it is not allowed for clothing. And “Cocaine” is fine for clothing, but not for soft drinks. You can have a book series trademarked “Managing Your Inner A**hole” but not “The Complete A**hole’s Guide To…” These inconsistencies are inevitable given the lack of any standards on what exactly constitutes an immoral, scandalous, or disparaging trademark.

Even more problematic is that the Trademark Office has attempted to protect minority groups from self-disparagement, by considering the race of the speaker. Take the example of the band The Slants. The band describes itself as Asian-American and chose its name as a method of reappropriating the term. The Trademark Office nonetheless rejected the trademark because of its members’ ethnic heritage, stating that the term “slant” as applied to a band composed of Asian-Americans could only be seen as a slur.

Indeed, the reappropriation of terms that have historically disparaged marginalized groups is a common way for those same groups to reclaim the meaning of those terms and change social attitudes. Consider the fact that the group “Dykes on Bikes” had to fight to register its name, which was first rejected for being vulgar or disparaging, but later accepted after the group submitted evidence that the term “dyke” can be a source of pride for their community.

But why should the government get to play language police? It shouldn’t – especially when experience shows that self-expression by women and sexual minorities is more likely to be deemed immoral or scandalous, and therefore more subject to government restriction under the present trademark law. Furthermore, cancelling the Washington team’s trademark may not even be effective, because cancelling a trademark doesn’t prevent the team from using it. It does, however, make it easier for other people to disseminate it. So the Trademark Office decision in this case might result in even more use of a distasteful term – not less.

The ACLU has a history of defending the speech rights of groups we disagree with, because the First Amendment doesn’t protect only popular ideas. The Washington team’s choice of name is unfortunate. They should be – and are being – pressured to change it. But it isn’t government’s role to pick and choose which viewpoints are acceptable and which are not.