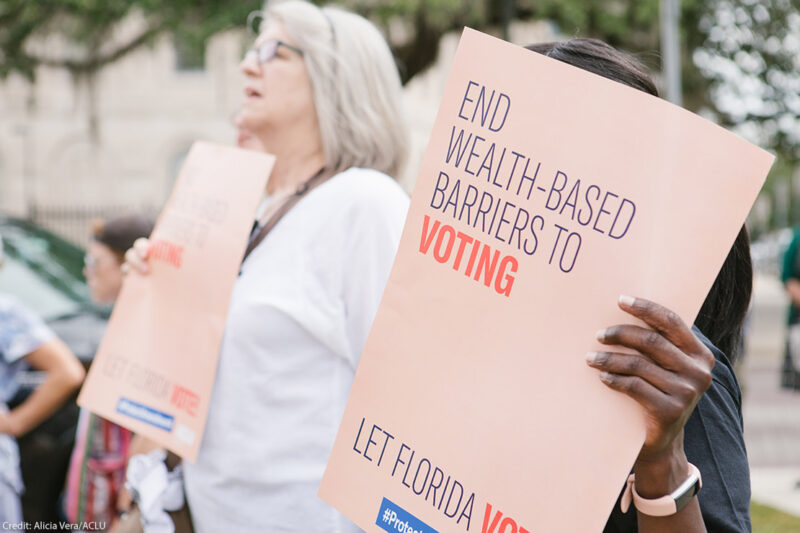 If the appeals court affirms the lower court’s judgment, it may enable hundreds of thousands of returning citizens to register to vote in time for the November election.

Betty Riddle, a grandmother and university graduate, stood in line to vote for the first time in her life in Florida’s 2020 presidential primary. Marq Mitchell, a peer support specialist and advocate, also proudly voted for his first time in March. Jeff Gruver, a local activist for people experiencing homelessness, is yet another of our clients who cast his vote and finally had a say in our democracy earlier this year.

It is on their behalf, and on behalf of all returning citizens’ behalf across Florida, that we return to court this month to fight for their access to the ballot box in elections to come.

Nobody should be denied their voting rights because they lack sufficient wealth. Courts have repeatedly held wealth-based barriers to voting are unconstitutional. Yet Florida wrongly asks the U.S. Court of Appeals for the Eleventh Circuit to permit the state to charge returning citizens money to vote and to reverse our clients’ latest victory before the trial court in May, which rejected Florida’s modern-day poll tax.

The case concerns Amendment 4, which restores voting rights to more than one million people with felony convictions who have completed their sentences. A resounding majority of Floridians voted to pass Amendment 4 in 2018. But soon after, Gov. Ron DeSantis and the Florida Legislature enacted a poll tax requiring newly-eligible voters to pay off all outstanding fines, fees, costs, and restitution, or legal financial obligations (LFOs), to vote. They transparently attempted to undermine the wishes of Florida’s voters and to eliminate and silence disproportionately Black voters from exercising their fundamental right to vote.

The ACLU immediately sued Florida in partnership with the ACLU of Florida, the Brennan Center, and the NAACP Legal Defense and Educational Fund. The district court issued a preliminary injunction in October of 2019. The Eleventh Circuit later affirmed the victory in February of 2020. The district court heard our clients’ claims during a remote trial in April and May 2020. In May, it ruled in our clients’ favor, saying SB 7066’s LFO requirements violate the U.S. Constitution by discriminating on the basis of wealth. The court also held requiring the payment of LFOs violates due process and the National Voter Registration Act. It also violates the 24th Amendment’s prohibition of poll taxes. Florida appealed.

Now, we return to court to defend our clients’ victory. If the appeals court affirms the lower court’s judgment, it may enable hundreds of thousands of returning citizens to register to vote in time for the November election.

Florida’s illegal poll tax has left voters hanging through several election cycles and confused about their voting eligibility. To this day, Florida still has no centralized database where returning citizens can determine how much they owe, and what records exist are often inaccurate, conflicting, or scattered across the state.

Many returning citizens, like our client Betty Riddle, have convictions dating back decades. It took Betty many calls, visits, and letters to learn she owed over $1,000, which she could not afford to pay. She explained to the ACLU the unfairness did not hit her right away: “I didn’t realize that it wasn’t right until I asked myself, ‘Why are we paying to vote?’”

What’s worse, Florida requires returning citizens seeking to register to swear under penalty of perjury they are eligible to vote. If they cannot determine their eligibility, they risk criminal prosecution for registering. Given how difficult — even impossible — it is for returning citizens to determine if they have any outstanding LFOs, policies like these undoubtedly prevent countless people from even registering out of fear of prosecution.

Florida has proven incapable of administering its poll tax. Voters should not have to pay the price for Florida’s unworkable system. SB 7066’s system is irrational, cruel, and unfair. It is also unconstitutional.

Before Amendment 4, Florida was one of four states that permanently revoked the right to vote for all people with past felony convictions. One in 10 voting-age Floridians could not vote for life, including one in five Black Floridians. Amendment 4 is historic for Florida and the entire nation. It is the single largest expansion of voting rights in the United States since the 26th Amendment lowered the voting age to 18 almost 50 years ago. Without Amendment 4, Florida would be the only remaining state with lifetime disenfranchisement.

Conditioning voting rights on the ability to pay is simply unconstitutional. We proudly fight for our clients against Florida’s attempt to put a price tag on voting.