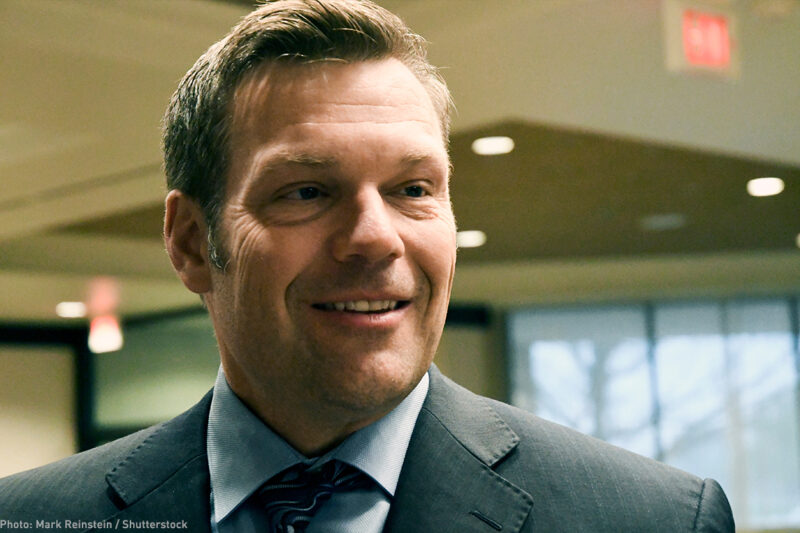 Chief Judge Julie Robinson’s judgement is not simply a verdict on the Kansas law. It is a verdict on Mr. Kobach himself and his record of distortions and fabrications about the myth of noncitizens registering, voting, and swinging the results of elections.

The decision comes after a three-week trial where the American Civil Liberties Union faced off against Kobach over a 2013 Kansas law that required Kansans to produce a document proving citizenship, such as a passport, before registering to vote.

The court found that the law imposed serious burdens on “tens of thousands of eligible citizens [who] were blocked from registration.”

Kobach is one of the most outspoken public figures on the supposed threat of voter fraud, having served as the vice-chair of President Trump’s now-defunct commission on election integrity. This trial was his shot to produce actual evidence in a court of law showing the existence of a problem he’s devoted much of his career to solving. He came up woefully emptyhanded.

Kobach lobbied for the passage of the law in the Kansas legislature based on little more than xenophobic rumors that, for instance, a group of “Somali nationals” had allegedly voted in Missouri or that a Kansas poll worker had purportedly seen a “Muslim lady” with an accent asking whether she could vote twice. These reports were thoroughly debunked, but the damage was done. The law went into effect, and as a result, more than 12 percent of total voter registration applications in Kansas — over 30,000 people — were blocked between 2013-2016.

At trial, the court carefully and thoroughly reviewed evidence from Kobach spanning two decades and found that there was virtually nothing to support his claims of rampant voter fraud. “The Court finds no credible evidence that a substantial number of noncitizens registered to vote” before Kobach’s law went into effect, Judge Robinson ruled.

Here are the hard numbers: Between 1999 and the present day, Kobach could only identify 39 instances where noncitizens successfully registered. By any measure, these instances are a microscopic fraction of the 1.8 million voters currently registered in Kansas and of the 9 million votes cast for the highest statewide office between 2000 and 2016. The court further noted that even these few cases could “largely [be] explained by administrative error, confusion, or mistake,” for instance, where noncitizens had been put on the rolls even when they identified themselves clearly as ineligible and asked to be removed.

Without any solid evidence, Kobach sought to amplify these numbers at trial, offering expert testimony purporting to estimate from the handful of identified cases much larger numbers of registered noncitizens. But Kobach learned that the untested exaggerations and speculation he was used to propounding in sympathetic media bubbles collapsed under the evidentiary scrutiny applied in a court of law. The court rejected the analysis of Kobach’s experts as patently misleading, biased, unfounded, and methodologically unsound.

Ultimately, the court concluded, there isn’t a risk of noncitizens corrupting the electoral process in Kansas, but rather it is Kobach who has eroded confidence by disenfranchising voters with needless barriers to voter registration. The Kansas “law disproportionately impacts duly qualified registration applicants, while only nominally preventing noncitizen voter registration,” the decision reads. “If eligible Kansans’ votes are not counted despite believing they are registered to vote, it erodes confidence in the electoral system.”

When weighing 30,000 citizens disenfranchised since 2013 against 39 instances of noncitizen registration from 1999 to 2018, the calculus is clear: Mr. Kobach is the far greater threat to the integrity of American elections.

The law struck down in Kansas is one among many voter suppression measures being challenged by the ACLU and other advocates. In permanently blocking the law, Judge Robinson rightly concluded “that the magnitude of potentially disenfranchised voters impacted . . . cannot be justified by the scant evidence of noncitizen voter fraud.”

There is a long history of elected officials, like Kobach and the president himself, propagating the myth of voter fraud to undermine American democracy and political participation. The clear-eyed analysis in Fish v. Kobach provides the perfect antidote.