Fifty-Seven Years After its Enactment, the Voting Rights Act is in Peril 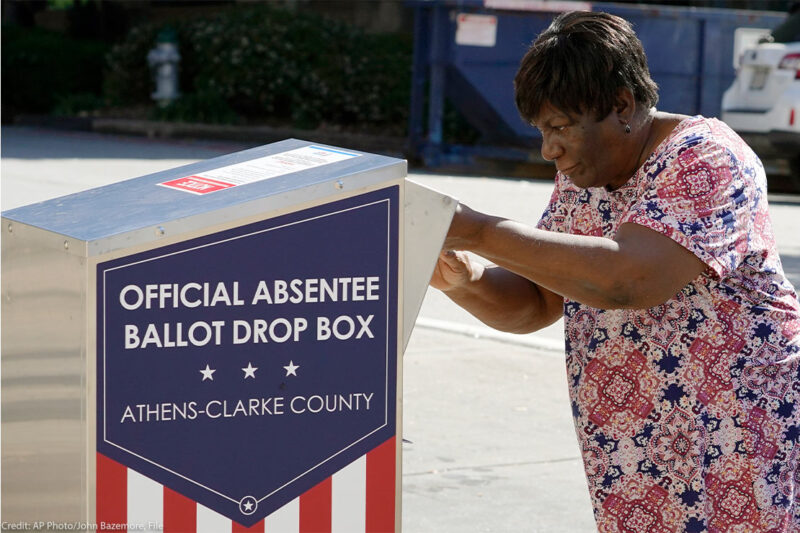 On this anniversary of the VRA, the fight to secure the right to vote faces its greatest battles in over a generation.

This week marks 57 years since the signing of the Voting Rights Act (VRA), landmark legislation that ensured the right to vote was protected for all Americans.

In the decades following the Civil War, states in the South enacted discriminatory measures, such as poll taxes and literary tests, in order to stop Black Americans from voting. Not to be deterred, voting rights activists protested and mobilized, but were met with brutal violence and intimidation. These efforts culminated in 1965, as voting rights activists seeking to march from Selma to Montgomery, Alabama were severely beaten and bloodied. The nation watched, shocked and outraged, which pushed President Lyndon B. Johnson to call on Congress to pass comprehensive legislation to protect the right to vote. The result was the crown jewel of the civil rights movement: the VRA.

The VRA was designed to enforce voting rights guaranteed by the United States Constitution, and to secure the right to vote for racial minorities throughout the country, especially for Black voters in the South. For decades since its signing, the VRA has stood as a bulwark against racially discriminatory voting practices and paved the way for 45 years of progress on voting rights. But over the last decade, instead of protecting the VRA and expanding access to the ballot box, the Supreme Court and courts across the country have dismantled and gutted crucial parts of the VRA.

For decades, the VRA stood against racially discriminatory voting. Still, the Supreme Court and courts across the U.S. have crippled crucial parts of the VRA.

First, in the 2013 Shelby County v. Holder case, the Supreme Court eviscerated Section 5, one of the VRA’s most effective guardrails. Prior to this decision, states and counties with the worst histories and recent records of racial discrimination in voting had to obtain federal “preclearance” — that is, approval from the Department of Justice or a federal court — before implementing any changes to voting laws and practices, to ensure they did not curtail the right to vote for minority voters. Shelby County struck down the formula used to identify which states and localities were required to do so, gutting the heart of the VRA and opening the floodgates to wave after wave of anti-voting legislation.

Then last year, the Supreme Court dealt another blow to the critical protections provided in the VRA. In Brnovich v. Democratic National Committee, the court erected significant new barriers to lawsuits brought under Section 2 of the act, the nationwide prohibition on racially discriminatory voting laws. The new standard is completely at odds with the VRA’s purpose — to eradicate racial discrimination in voting, no matter how blunt or subtle.

In 2021 alone, more than 400 anti-voter measures were introduced by states across the country, many of which will disproportionately burden voters of color.

The attacks on the VRA have not abated. Just last month, the Supreme Court reinstated Louisiana’s congressional map, despite a federal court ruling that the map was racially discriminatory and likely violated the VRA. This is a repeat of what occurred earlier this year in Alabama. There, the Supreme Court allowed yet another racially discriminatory congressional map to stand in the face of a federal court ruling that it likely violated the VRA. It’s clear the robust federal safeguards instated by the VRA to protect the right to vote are quickly being rolled back.

At the same time, politicians across the country continue to push the big lie that the 2020 election was stolen. This lie not only led to the attack we saw on the Capitol on January 6, but is fueling even more voter suppression legislation across the country.

In 2021 alone, more than 400 anti-voter measures were introduced by states across the country, many of which will disproportionately burden voters of color. This relentless assault on voting rights shows no signs of receding. These measures run the gamut from restricting access to vote by mail, eliminating Election Day registration, and making it more difficult to vote early in person to criminalizing efforts by local election administrators to assist voters. Additionally, like in Louisiana, several states have enacted new electoral maps that systemically minimize the voting strength of Black voters.

As we reflect on the 57th anniversary of VRA, there should be no question that the right to vote is under siege and that these efforts to interfere with and minimize our right to vote fall heaviest on already marginalized people, especially Black communities. We still have so much work ahead of us to ensure every eligible American has the right to vote. Here at the ACLU we’ve redoubled our efforts to fight for voting rights in courts, in state legislatures, and on the streets. For over 100 years we’ve protected the civil liberties of all Americans, and we’ll continue to be on the frontlines of this fight to protect our rights.