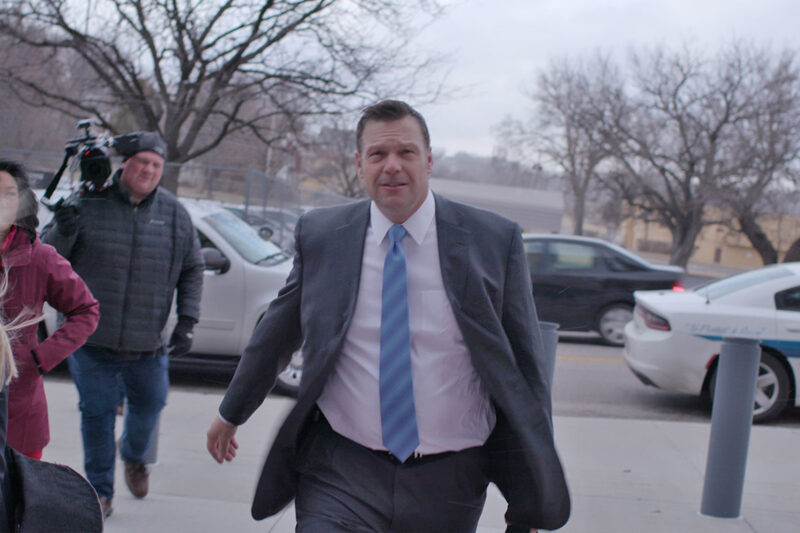 UPDATE (06/18/2018): The court struck down Kansas’ documentary proof-of-citizenship law, which disenfranchised thousands of eligible voters. The judge found that the law violates the National Voter Registration Act and the U.S. Constitution.

The federal trial over a law that disenfranchised tens of thousands of voters in Kansas is expected to end tomorrow. For the past two weeks, Kansas Secretary of State Kris Kobach has attempted to defend not just his signature legislation, which requires people to show documentary proof of citizenship such as a birth certificate or passport when registering to vote, but to support his claim of rampant voter fraud.

He failed spectacularly on both scores. Here are the courtroom highlights:

Kobach has been looking for proof of illegal voters for years, and he’s had unparalleled resources to do so. In 2015, he successfully pushed Gov. Sam Brownback for the power to criminally prosecute cases of voter fraud, making him the only secretary of state in the country with such sweeping authority.

So what exactly did he come up with?

At trial, Kobach was only able to identify 18 noncitizens — out of 1.8 million voters —who have successfully registered to vote over a nearly 20-year period. Only five of them actually cast a ballot. Kobach was not able to show that these 18 instances constituted intentional cases of fraud, rather than mistakes stemming from clerical errors.

Regardless, Kobach claims that these numbers represent “just the tip of the iceberg.” In his crusade to find the rest of the non-existent mass, he seems willing to accept the more than 35,000 people who were actually blocked from registering to vote under his law as collateral damage.

Kobach presented Hans von Spakovsky to the court as an expert on elections, election administration, and voter fraud. A senior legal fellow at the Heritage Foundation, von Spakovsky has been a vocal proponent of restrictive voter ID laws to combat noncitizen voting. He previously served with Kobach on President Trump’s now-disbanded commission on Election Integrity.

Prior to trial, von Spakovsky produced a report stating that Kansas’ documentary proof-of-citizenship requirements pose no burden to voters. And during cross-examination, von Spakovsky said he could not name a single voter registration requirement in effect that he would consider burdensome to voters.

He was unable to name a single federal election where the outcome was changed by noncitizen voting.

Von Spakovsky is no expert on voting, and it appears he knows nothing about citizenship in the United States. He does not believe that anyone born on American soil is, in fact, an American citizen. Rather, he said on the stand that “to be a U.S. citizen at least one of your parents has to be a U.S. citizen.” This is absolutely false.

Kobach’s other expert witness offered no evidence of rampant voter fraud in 2016.

Kobach has repeatedly cited research by Jesse Richman, an associate professor at Old Dominion University, to support his claims about voter fraud. He cited that research to support his theory that millions of people voted illegally in the 2016 election, costing Trump the popular vote.

Under cross-examination, Richman said that his study does not support Kobach’s conclusions and he doesn’t know of any studies that do.

Before the trial, Richman had produced several highly questionable estimates of the number of noncitizens registered to vote in Kansas, which ranged from 1,000 to 18,000 individuals. When asked about the 18,000 figure, Richman admitted that it was an unweighted estimate with a small sample size and that a weighted sample size would, in fact, produce a better estimate.

The ACLU also presented an open letter signed by 200 political scientists who criticized Richman’s work and methodologies for identifying noncitizens on the voter rolls. One of these methods was flagging “foreign-sounding” names.

During cross-examination, Dale Ho, the director of the ACLU’s Voting Rights Project, asked Richman if he would have flagged the name “Carlos Murguia” as a foreign-sounding name. After Richman answered yes, Ho informed him that Murguia is a federal judge in the same courthouse as the trial.

As trial wraps, opposing sides will make closing arguments and the judge will rule on a motion to hold Kobach in contempt of court for repeatedly refusing to comply with the court’s preliminary order blocking the law, and with related orders on notifying the public about voter registration requirements. A federal magistrate has already sanctioned Kobach for making “patently misleading representations to the court.”

Ultimately, we’ll need to wait until Judge Julie Robinson rules to know the trial’s outcome – and whether Kobach’s law will pass muster under the National Voter Registration Act. However, the trial has already shown that while Kobach can cry voter fraud all he wants, but when it comes time to offering proof, he came up empty-handed.

The next time President Trump trots him out as a national authority on voting, we should all remember that.