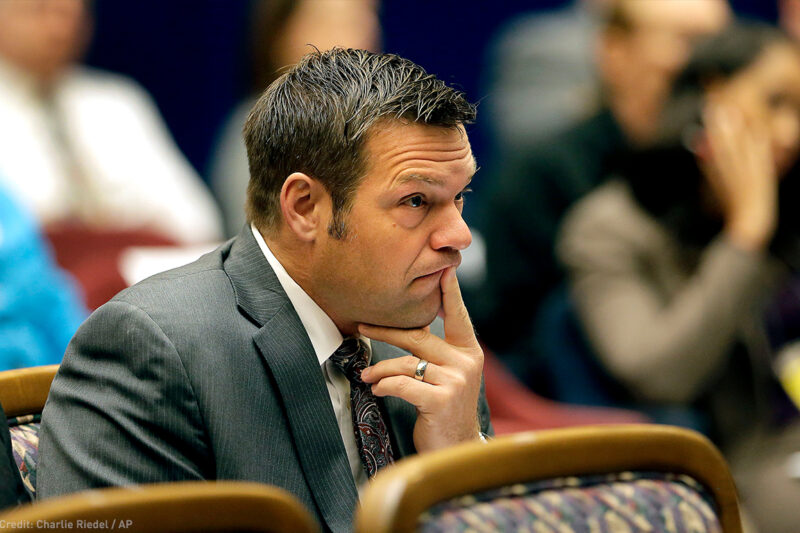 The federal trial over a Kansas law requiring people to show citizenship documents like a birth certificate or passport when registering to vote begins on March 6 in Kansas City. The American Civil Liberties Union will represent the League of Women Voters and several individuals whose voting rights were violated. Kris Kobach — the secretary of state of Kansas, chief architect of the law, and the defendant in the lawsuit — will represent himself.

From 2013 to 2016, more than 35,000 Kansans were blocked from registering because of Kobach’s documentary proof-of-citizenship law — approximately 14 percent of new registrants. Many Kansans, including several of our clients, went to the polls on Election Day in 2014 with every reason to believe that they were registered, only to be told, “Sorry, you haven’t proven that you’re a U.S. citizen.”

We filed suit in 2016, charging that Kobach’s law undermines the fundamental right to vote and violates the National Voter Registration Act. In a preliminary ruling for the 10th Circuit, Judge Jerome Holmes, who was appointed by George W. Bush, found that the law had caused the “mass denial of a fundamental constitutional right.”

The law is now blocked under the 10th Circuit’s order, which stays in effect until the trial’s outcome.

What are the national implications of the trial?

The stakes are high, and not just for Kansans who want to be able to register to vote.

The NVRA was designed to reduce barriers to registration as well as to ensure a level of uniformity and consistency in voter registration amongst the states. Kobach, however, is arguing that every state can demand anything it wants from people seeking to register to vote. Should he prevail, that uniform system of voter registration would be turned into a patchwork.

This trial is also very much a part of Kobach’s broader voting agenda. Documents, which were unsealed as a result of our litigation, confirm that Kobach is looking to gut the NVRA. On Nov. 20, 2016, he was photographed carrying his agenda for the “First 365 Days” of the administration before a meeting with President-elect Trump and advisors Steve Bannon, Stephen Miller, Jared Kushner, and Reince Priebus. The plan included an amendment to the National Voter Registration Act to “promote proof-of-citizenship requirements.” Kobach gave each of them a copy of his plan, pitching the idea that noncitizens were potentially swinging election results.

Seven days later, the president tweeted that he had won the popular vote if you deduct the “millions of people who voted illegally,” a claim that Kobach also believes. In May 2017, Trump formed the Presidential Commission on Election Integrity with Kobach as vice-chair. The commission has since been disbanded following a series of lawsuits, including ours. Throughout 2017, Kobach was in the national spotlight, raising the specter of voter fraud, a claim he has yet to substantiate and one that the trial in Kansas will hinge upon.

What will the trial focus on?

The 10th Circuit found that, under the NVRA, it is illegal for Kobach to demand citizenship documents unless he is able to demonstrate that 1) there are a substantial number of noncitizens registering to vote in Kansas and 2) that it is necessary to require citizenship documents from every registrant.

We will also ask the court to rule on our motion to hold Kobach in contempt of court for repeatedly refusing to comply with the court’s preliminary order blocking the law, and with related orders on notifying the public about voter registration requirements. A federal magistrate has already sanctioned Kobach for making “patently misleading representations to the court.”

Why is the law illegal?

To comply with the NRVA, states have to provide people with an opportunity to register to vote when they apply for or renew their driver’s licenses. Instead, Kansans were being required to present additional citizenship paperwork, such as a birth certificate or passport, in order to be registered. Many were not being informed at all, only to find out later that their applications had been suspended, and that they were not allowed to vote. And some voters who did actually produce the citizenship documentation still ended up suspended because the department of motor vehicles failed to transmit that information to the elections office.

As the federal district judge put it, Kobach’s law created “a confusing and inconsistently-enforced maze” of requirements for voters.

Whom did it affect?

People sometimes ask, “What’s so hard about getting a birth certificate?” And it might not be hard for some people.

But not everyone has a copy of their birth certificate and getting one is not free. Having to send away for a birth certificate takes time and money. For instance, one of our clients, Donna Bucci, tried to register to vote, but she did not have her birth certificate. She was born in Maryland, a state that charges over $20 for the document. Donna works at a correctional facility and could not afford to spend that money. Consequently, she was deprived of her most fundamental right in our democracy.

The requirement also makes voter registration drives impossible. Most people don’t carry copies of their birth certificates and passports around with them and aren’t comfortable providing them to strangers.