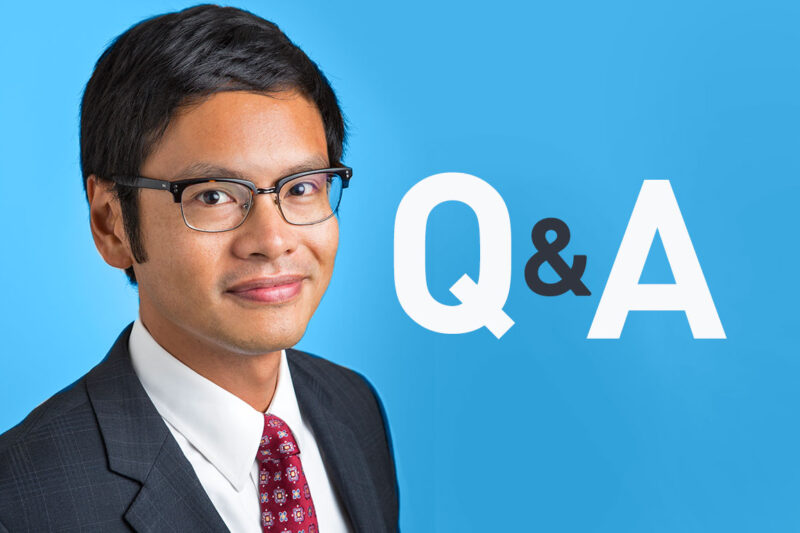 President Trump signed an executive order yesterday forming a commission to investigate voter fraud and voter suppression after repeatedly claiming, without evidence, that the United States has a “major problem” with illegal voting.

In response to the executive order, the ACLU’s Voting Rights Project immediately filed a Freedom of Information Act request demanding that the government release any “evidence” it has to support President Trump’s claims of voter fraud. Too often in our country’s history, accusations of voter fraud have been used to justify unnecessary and unconstitutional restrictions on the right to vote.

I sat down with Dale Ho, director of the ACLU Voting Rights Project, to discuss the potential impact of the commission and what Americans can do to protect one of the most fundamental rights in our democracy. Below is a slightly edited version of our conversation.

What was your first thought when the news broke today about President Trump’s executive order on election integrity?

Dale Ho: That this was the first step in a plan to suppress voting in this country. There is no evidence that we have a problem with election integrity. You can tell that this is a sham commission just by the appointment of Kris Kobach, someone who has devoted much of his professional life to suppressing the vote, to vice-chair. It’s a circus show, designed to undermine confidence in our system and to reach a pre-determined result and to justify laws that make it harder for people to register and vote as a result.

Is this preoccupation with voter fraud new to the 2016 election and Donald Trump?

The American people should demand that elected officials and election administrators not participate in this phony commission.

Ho: No, not at all. There was a similar wild goose chase to root out voter fraud during the George W. Bush administration. It was a five-year investigation nationwide that cost millions of dollars and turned up a few dozen reported instances of fraud over a period of time in which hundreds of millions of ballots was cast. It was a political agenda that led to the improper firings of a number of United States attorneys. It was one of the biggest scandals of the George W. Bush administration, and it eventually resulted in the resignation in disgrace of Alberto Gonzalez as attorney general.

We’ve been down this road before. People have looked for this fraud; it’s not there. What we’ve gotten instead are politicized witch hunts that end in disgrace. I expect nothing different here.

As the commission begins to carry out its investigation, what do we need to watch out for?

Ho: First, we need to watch out for any discussion about changing the “motor voter” law. Passed in 1993, motor voter standardizes voter registration practices around the country. It ensures that anyone who interacts with the DMV or another government agency has the opportunity to register to vote. It’s made the system simple and uniform.

Efforts to tinker with that without any evidence of fraud would be a huge problem. We know that Kobach has a plan to change the motor voter law. The documents that outline the plan were photographed in his arms when he was interviewing for homeland security secretary. There’s no real inquiry happening here; the outcome and policy recommendations are already determined. And it’s going to be to try and change the motor voter law so that instead of this uniform and simple system that we have nationwide, we’ll have the disaster of voter suppression that Kobach has enacted in Kansas.

The ACLU’s Voting Rights Project has a long history with Kris Kobach. Tell us about it.

In a democracy, you can either compete for these votes or you can try to suppress them. The latter is Mr. Kobach’s strategy.

Ho: Kris Kobach is the king of voter suppression. He has an obsession with trying to show that there is widespread cheating in our elections when there isn’t. In Kansas, he’s instituted a “Show Me Your Papers” law which requires people to show a birth certificate or passport when they register to vote. The U.S. Court of Appeals for the 10th Circuit, in a unanimous opinion by Judge Jerome Holmes, who was appointed by George W. Bush, found that Kobach had engaged in “mass denial of a fundamental right” by blocking 18,000 motor voter applicants from registering to vote.

After he was ordered to fix that problem, Kobach said fine, I’ll let those voters vote in federal elections, but I’m not going to let them vote in state and local elections. We had to go back into court and this time, a state judge said Kobach had no authority to separate Kansas’ election system into a bizarre two-tiered system where some people could vote for president, but not governor. Kobach tried to justify these laws by saying that there is widespread voter fraud. The 10th Circuit called that “pure speculation.”

In yet another case, the U.S. Court of Appeals for the D.C. Circuit said that Kobach had “precious little record evidence” of noncitizen voting. So this is a person who shamelessly spreads a myth of widespread voter fraud, has no evidence to back it up, and uses it as a justification for laws which suppress voting. One out of seven people who’ve tried to register in Kansas since his “Show Me Your Papers” law went into effect have been blocked from registering to vote.

It’s been a complete disaster in Kansas and it’s obvious he’s trying to replicate that disaster nationwide. It’s an effort to freeze the electorate in place. It disproportionately affects young people, people who register for the first time. Half of the people in Kansas who have been blocked by this law are under the age of 30. This is a voter suppression plot.

You mentioned freezing the electorate in place. The United States is a country that is rapidly becoming more and more diverse. Can you talk about how voter suppression efforts disproportionately impact people of color?

Ho: We know that the electorate is changing. People of color are growing, not just in terms of their numbers but in terms of the rate at which they participate in the elections. And that may have consequences in terms of who wins elections. In a democracy, you can either compete for these votes or you can try to suppress them. The latter is Mr. Kobach’s strategy. In the case we are litigating in Kansas, his own expert found that African-Americans, who are 6 percent of the citizen voting pool in Kansas, represent 18 percent of the people who lack documents like a birth certificate or passport. So we know it’s going to have a racially disproportionate effect and that’s Kris Kobach’s own expert telling us so.

What can the public do to advocate for voting rights and hold elected officials accountable?

We’ve been down this road before. People have looked for this fraud; it’s not there.

Ho: First the American people should demand that elected officials and election administrators not participate in this phony commission. The only thing that participating in this commission will do is lend a person’s credibility to a sham process, unless or until Kris Kobach is removed as the vice-chair. Secondly, people should demand that no changes be made to the motor voter law. It’s one of the most important laws in our country. Attempts to undermine it will hinder Americans’ ability to exercise the most fundamental right in our democracy. And finally, we have to talk about what is really wrong with voting in the United States: We have one of the worst voter turnout rates in the world. Our democracy’s weakness is that there are so many eligible people who don’t make it to the polls, not that we have ineligible people trying to break into the system. If we want to enhance election integrity, we should focus on ensuring that everyone who wants to participate can.