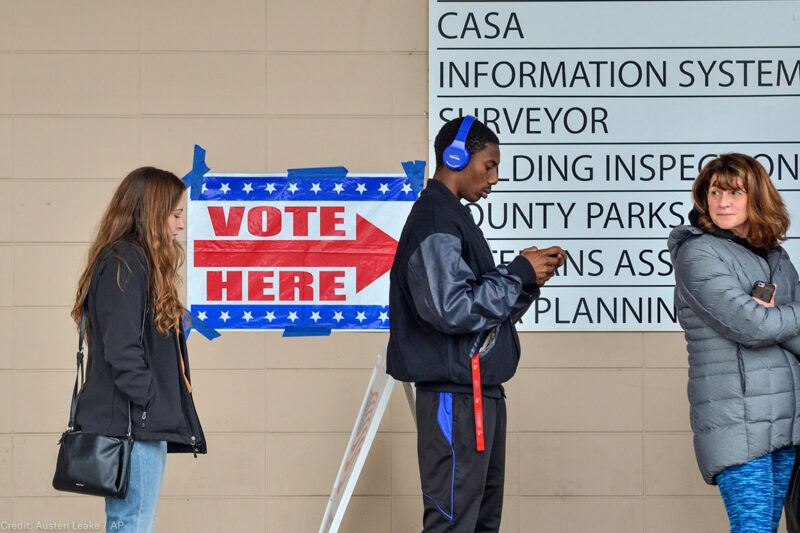 The New Hampshire 2020 primary is still almost a year away, but state legislators are already working to disenfranchise voters. HB 1264, a law set to go into effect in July 2019, will change the definition of what it means to be a “resident” of New Hampshire, forcing people with out-of-state driver’s licenses or car registrations to switch to the state versions if they register to vote.

While it may sound like an archaic DMV issue, it’s actually a burden on the right to vote. In New Hampshire, students are lawfully permitted to vote in the town where they live while attending school.

By requiring people to pay up to hundreds of dollars in vehicle registration fees if they register to vote, the law unconstitutionally restricts voting rights and, in particular, targets New Hampshire’s students and young people to dissuade them for voting. That’s why we just filed a lawsuit on behalf of two Dartmouth College students, both of whom were eligible to vote in the 2018 elections but now would be forced to update their driver’s licenses if they participate in 2020.

For our plaintiffs, this fight is about having a voice in the issues that matter most to them. Caroline, a sophomore, is heavily involved in get-out-the-vote efforts on her campus. She’ll be living in New Hampshire until at least 2021 and wants to make sure her voice will be heard by legislators in New Hampshire on the issues she cares about.

Maggie, another student in our case, wants to vote for candidates who will act on climate change. As she puts it, “I spend more of my time [in New Hampshire] than anywhere else, and these state and local politicians can affect anything from my access to health care to the quality of air I breathe.”

Stretching back to the passage of the 26th Amendment — which lowered the voting age to 18 in 1971 — New Hampshire has repeatedly tried to exclude students from its elections. In the early 1970s, New Hampshire disqualified citizens from voting in a municipality if they had a “firm intention” of leaving that town at a fixed time in the future. In 1972, a federal court struck the law down because it explicitly targeted college students.

That didn’t stop state legislators from trying other tricks to stop students from voting.

In 2012, the New Hampshire Legislature enacted a law that amended the voter registration form to suggest, inaccurately, that voters would be obligated to apply for New Hampshire driver’s licenses if they register to vote. The law was clearly passed with partisan intent. In fact, in September of 2012, the New Hampshire Speaker of the House Bill O’Brien described the language as necessary because college students were “[v]oting as a liberal. That’s what kids do.” The ACLU of New Hampshire challenged the 2012 law, and a court struck it down as unconstitutional.

New Hampshire should have learned its lesson. Instead, following the 2016 election, legislators went back to the drawing board to target young voters.

The process by which HB 1264 was passed alone reveals it to be a partisan attempt to restrict students’ right to vote. Despite the fact that the law changes the definition of a New Hampshire resident for motor vehicle purposes, the bill was considered by the Election Law Committees of both houses of the state legislature. One of the chief advocates for the law was the New Hampshire Secretary of State’s Office — the agency in charge of administrating elections. The Division of Motor Vehicles did not even take a position on this legislation, nor did it offer a cost estimate. And legislators supporting the law made known their intention to dissuade students from voting.

Young people can and should play a leadership role in our country’s democracy. States that put unnecessary and unjustified barriers in the way of young people voting are violating the Constitution and doing a disservice to the democratic process.

New Hampshire is a repeat offender when it comes to suppressing voting rights. We will see them in court to protect students’ right to vote.