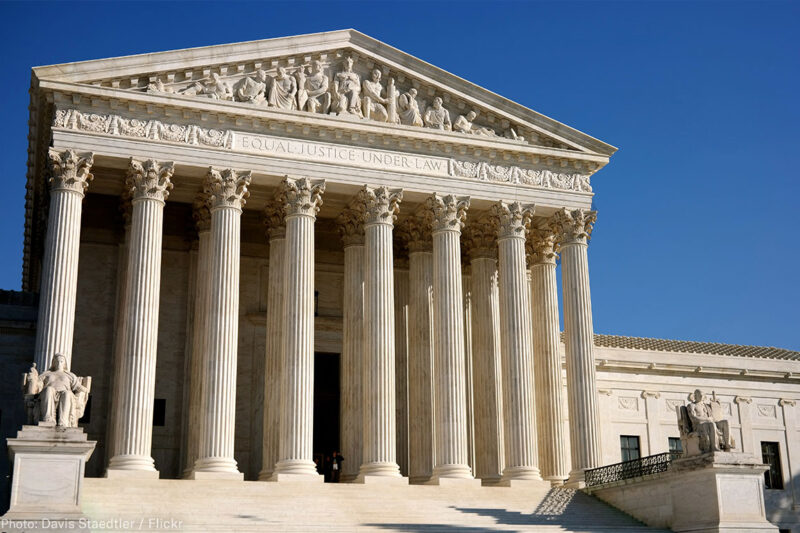 On Tuesday, the Supreme Court chose to stand by and allow the war against voting to continue. Just a little less than a month before midterm elections that will determine control of Congress, the court decided not to block North Dakota’s restrictive voter ID law, which will make it harder for people in that state to cast their ballots.

Republicans in the state legislature insist that the law is needed to prevent voter fraud — despite there being virtually no evidence that such fraud is a problem. Instead, the real effect of their law will be to prevent voters whom they fear from going to the polls and having their say in who represents them.

The voter ID law was introduced just months after Senator Heidi Heitkamp, a Democrat, eked out a narrow upset victory in 2012, winning by less than 3,000 votes. Republican lawmakers responded by passing restrictive voter ID legislation that all but guaranteed that large numbers of Native Americans — who tend to vote Democratic — wouldn’t be able to participate in the political process. Specifically, the law requires voters to bring to the polls an ID that displays a “current residential street address” or other supplemental documentation that provides proof of such an address.

This may seem like an innocuous requirement, but in practice, it’s likely to disenfranchise thousands of Native Americans, many of whom live on reservations in rural areas and don’t have street addresses. Since the U.S. Postal Service doesn’t provide residential mail delivery in remote areas, many members of North Dakota’s Native American tribes list their mailing addresses, like P.O. boxes, on their IDs. And some also don’t have supplemental documentation, like a utility bill or bank statement, because of homelessness or poverty. Now, because the Supreme Court refused to block the law, people who show up at their polling station with a P.O. box on their ID will be turned away.

The Native American Rights Fund sued North Dakota in early 2016, arguing that the law was unconstitutional and a violation of the Voting Rights Act. A federal district judge agreed, issuing a ruling in April that blocked the ID requirement, but the Court of Appeals for the Eighth Circuit overturned that ruling in a 2-1 decision in September. The Supreme Court’s denial of the Native American Rights Fund’s emergency appeal means that the law will stand, creating a huge amount of confusion for thousands of voters whose IDs were valid for the June primaries but are no longer adequate for them to vote on Nov. 6.

In her dissent, Justice Ruth Bader Ginsburg pointed out exactly what’s at stake for North Dakota — 70,000 residents of the state lack an ID that qualifies under the new rules. That’s nearly 20 percent of the typical turnout for a midterm election. The ruling, Ginsburg said, “may lead to voters finding out at the polling place that they cannot vote because their formerly valid ID is now insufficient.”

In an election that may wind up being decided by just a few thousand votes, the court’s decision could be deeply consequential for the country, not just those who live in North Dakota.

There’s no reason to look away from the implications of this law: One of America’s major political parties is doing everything it can to restrict access to the electoral process. This is an attack that must be confronted for what it is — a threat to democratic governance that will have the effect of taking away the most basic right of a large number of vulnerable voters of color.

The Supreme Court has repeatedly demonstrated that it won’t safeguard our right to vote, so now it’s up to us to make sure we elect representatives who will.