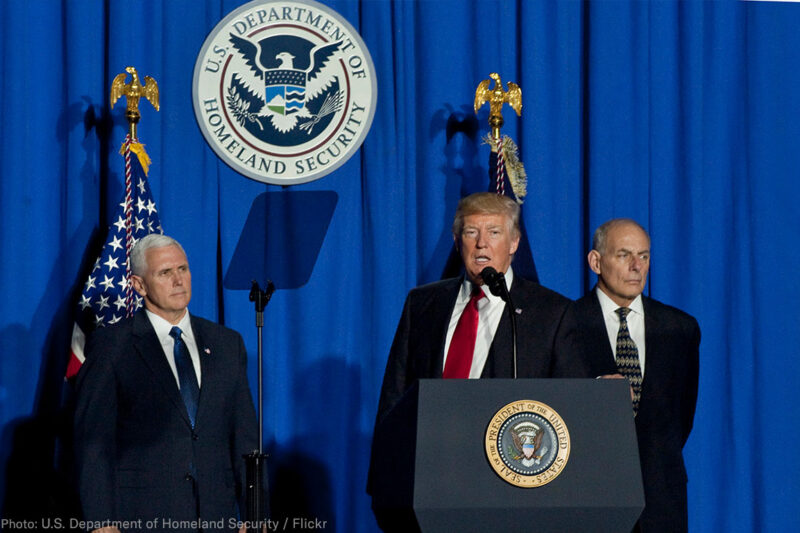 On Wednesday night, the White House announced that it would disband the Election “Integrity” Commission led by Vice President Pence and Kris Kobach, the Secretary of State of Kansas, citing the refusal of state officials to go along with Kobach’s reckless plan to collect sensitive data on every single voter in the country.

Donald Trump formed the commission after he falsely claimed that he was the true winner of the national popular vote in the 2016 presidential election, claiming that his nearly 3 million vote deficit was the result of voter fraud. Despite failing to produce any proof of rampant voter fraud, the White House insisted in its statement last night that there is still “substantial evidence” of fraud. The president tweeted this morning that the “System is rigged, must go to Voter I.D.”

The Trump administration also announced that the Department of Homeland Security will take up the voter fraud cause, and Kobach told Politico that “he expects officials from Immigration and Customs Enforcement and political appointees overseeing that agency to take over the commission’s work and begin efforts to match state voter rolls to federal databases of noncitizen.”

All signs suggest that Homeland Security will use the Systematic Alien Verification for Entitlements Program (SAVE) database, which is used to verify citizenship and immigration status, to see if non-citizens have registered to vote.

When Colorado, North Carolina, and Florida tried to use SAVE to see if non-citizens were on the voter rolls, the states experienced disastrous results, incorrectly flagging many U.S. citizens. Because SAVE is not updated regularly, many people who naturalized as citizens could still be listed as non-citizens. In 2012, the Justice Department said that Florida’s use of SAVE had “critical imperfections,” and led to “errors that harm and confuse eligible voters.” Amid widespread concerns of inaccuracy, Florida eventually abandoned its efforts to use the SAVE database after its purge was ruled illegal by the U.S. Court of Appeals for the Eleventh Circuit. Because of the huge amount of false positives, using SAVE to purge voter rolls could be disastrous.

But purging voters is Kobach’s aim.

Kobach, who gained national notoriety for his relentless efforts to disenfranchise tens of thousands of Kansans, met with Trump before his inauguration and reportedly was a source for the president’s unsubstantiated claim that 3 million to 5 million people voted illegally in the presidential election.

The ACLU challenged Kobach’s efforts in Kansas and was able to unseal the documents from his meeting with Trump. These records revealed that despite the administration’s insistence that the probe had no “preordained” notions or results, the commission’s vice chair, Kobach, had lobbied Trump and senior advisers to gut the National Voter Registration Act as early as Nov. 20, 2016. The commission would give the White House the justification to push for such a plan, and Kobach packed the panel with others who have aggressively fanned fears of widespread voter fraud like Hans von Spakovsky, J. Christian Adams, and Ken Blackwell.

The commission faced serious resistance from the start. At least 15 lawsuits, including the ACLU’s, were filed and dozens of states refused to comply with the commission’s overreaching requests.

Kobach’s own efforts to find voter fraud in the 2016 election were discredited, though he falsely argued that thousands out-of-state voters had cast ballots in New Hampshire. Trump, for his part, cited the statements of an obscure partisan activist who still has not released any evidence that voter fraud occurred in the presidential election.

While Trump’s commission may be disbanded, attempts by his administration and Kris Kobach to lay the groundwork for voter suppression are far from over.