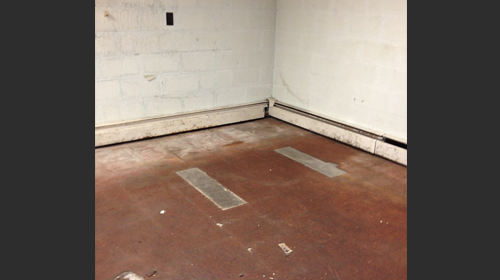 Update (02/04/2014): Good News: Bobbi will get her day in court! The judge in her case found that assigning Bobbi, a new mom, to a rotating shift could constitute retaliation for her having complained about the conditions of the pumping room. Her case will move forward and she’ll have the chance to try to prove her case.

This is the story of how I ended up pumping breast milk while sitting on a filthy floor, covered in dirt and dead bugs, at the plant where I work – and what I decided to do about it.

For the last six years I’ve worked at Saint Gobain Verallia, a glass-bottling factory in Port Allegany, PA operating heavy machinery. I’m one of a few women that work on the male-dominated factory line. . I also have two beautiful children, one of whom, my sweet daughter Lyla, was born very recently. I love my children, and I love my work. I’ve had this job for the past six years, and it’s made it possible for me to provide for my family.

I firmly believe that breastfeeding is the best thing for my baby. I had breastfed my firstborn, and knew it was healthy for me and for my baby. I also knew that my employer was legally obligated to provide me reasonable break time under the newly-passed “Nursing Mothers Provision” of the Affordable Care Act (otherwise known as “Obamacare”). So when I became pregnant with my second child, I made clear to my supervisor that I intended to return to work, that I wanted to continue breastfeeding and that I would need accommodations to pump. I even dropped off a copy of the law at the Human Resources department. But both my supervisor and HR were apparently ignorant of the new law: my supervisor initially told me to pump in the bathroom.

If they had actually read the law, like I had done, they would have known that a sanitary space for pumping explicitly excludes restrooms.

When I returned to work, I was placed on the day shift so that I could take the breaks I needed and I could maintain my pumping schedule. But in the room my employer gave me to pump in, I was constantly interrupted by my male coworkers pounding on the door and harassing me.

When I complained, each alternative my employer offered was worse than the last – for example, a room that was made almost entirely of glass that offered no privacy, a shower room, a room with no way to lock the doors… You get the picture.

I eventually agreed to use an old locker room, even though it was filthy, because at least it had a lock on the door – and they said they’d clean it up. But when I showed up to pump there a few days later, I found that the room had not been cleaned: it was covered in dirt and dead bugs, the floor was unfinished and had large patches missing from it, and there was no air conditioning – which is serious, because temperatures can get up to 106 degrees on the factory floor. The only furniture in the room was a single chair. I was completely disgusted, but what could I do? I only had a short break before I had to be back on my shift, and my baby has to eat, so I pumped there anyway. Even though I complained that it was filthy, the company did not have it cleaned. To make matters worse, shortly after that, someone took the chair from the room, which is how I found myself pumping on the floor, with dead bugs for company. 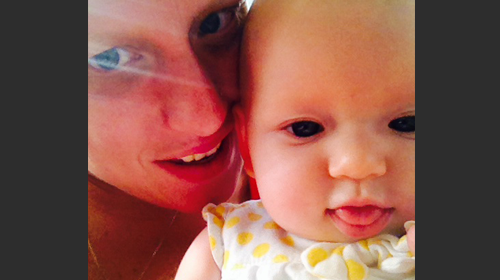 Bobbi and her daughter, Lyla

After weeks of my complaining about these conditions and the harassment I was experiencing, my supervisor and the HR manager informed me, without explanation, that I would be switched to the rotating shift, effective the following week. The rotating shift requires workers to switch between days and nights frequently, including an 11:30 pm – 7:30 am shift. The company has refused to budge from this decision, even though they know that this puts an enormous strain on me and my child care situation, and even after I produced doctors’ notes saying I needed to be on the day shift to help me keep a regular schedule for breastfeeding my baby. My request was denied. To add insult to injury when I requested to be put back on days, an HR representative told me that I would probably be harassed regardless of what shift I was on.

Being on the rotating shift has impacted my ability to breast feed, as the amount of breast milk I’m producing has plummeted. I’ve had to give my baby formula, which goes against my beliefs about what’s best for her.

The harassment I faced at work also escalated. On two occasions, someone “greased” the door handle of the room – some of my coworkers covered the door knob with thick, dirty grease (it even had shards of metal in it). I was beside myself, and complained again and again, but they’ve never identified the culprits and no steps were taken to train my colleagues to prevent further harassment.

The whole time, I could not believe this was happening to me – and how hard I’ve had to fight for nothing more than what the law required – in 2013!

When, 10 weeks after I returned to work, I still did not have a clean and private location to pump, I started contacting legal organizations for help. I am pursuing the legal routes available to me because of my struggle, and because of my strong belief in breastfeeding. I know that even if Saint Gobain Verallia makes changes in the face of legal pressure, I may never regain the ability to breastfeed my child. However, I hope that my story will help inform other nursing workers of their rights, and educate employers about their legal obligations. No woman should have to go through what I did simply to do what’s best for her baby.

Are you pregnant, post-partum or trying to breastfeed at work? Learn more about your rights at work: Know Your Rights: Pregnant, Post-Partum & Breastfeeding Workers.