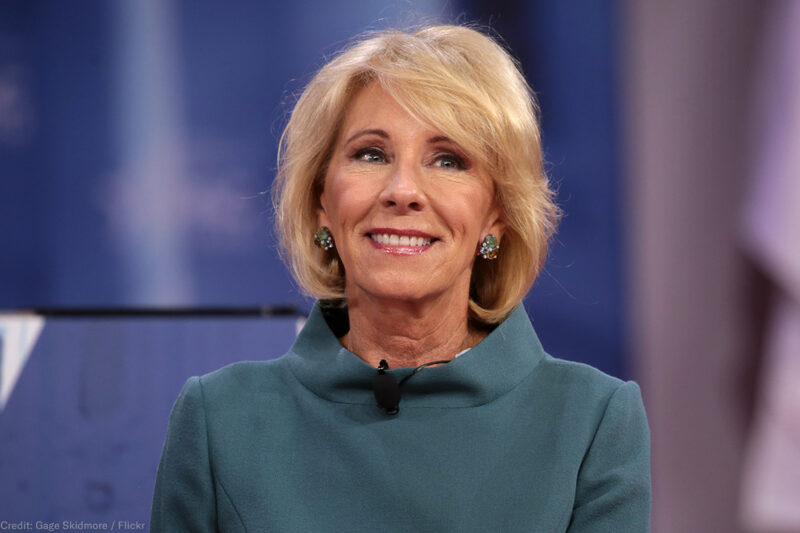 The Department of Education headed by Secretary Betsy DeVos on Friday released a proposed rule that, if implemented, would dramatically limit schools’ obligations to students who experience sexual violence and would not further the stated goal of fair process. The ACLU is equally committed to ensuring students can learn in environments free from sexual harassment and violence and to guaranteeing fair process for both respondents and complainants.

The new rule preserves some important protections for respondents from the Department of Education’s 2001 guidance, such as a guarantee of an impartial investigator and the opportunity to present rebuttal evidence. It also ensures both parties equal rights to appeal and access to evidence.

But the overwhelming effect of the new rule is to limit schools’ obligations to students who file complaints of sexual harassment and violence under Title IX, a federal civil rights statute that prohibits sex discrimination in education, without increasing the fairness of disciplinary proceedings. Under the new policy, schools will likely investigate far fewer complaints, and the Department of Education will hold fewer schools accountable for ensuring campuses are free of sexual harassment and assault.

Here are some key changes in how school investigations of sexual assaults and harassment would proceed if the proposed rule takes effect.

Schools would be required to investigate only the most extreme complaints of sexual violence.

The new rule would dramatically limit the definition of sexual harassment that gives rise to investigations. Schools would need to investigate only reports of “unwelcome conduct on the basis of sex that is so severe, pervasive, and objectively offensive that it effectively denies a person equal access” to education. Departing from earlier Department guidance, under the proposed rule, schools would not have to investigate complaints about “unwelcome conduct of a sexual nature” that “limit[s]” but does not “deny,” a students’ ability to learn. Yet in Davis v. Monroe County Board of Education, the Supreme Court limited this narrow definition of sexual harassment to “private suit[s] for money damages” brought by students against schools for ignoring complaints of sexual violence. All allegations of sexual harassment should be investigated.

Schools could adopt a standard of proof that favors the respondent.

Standards of proof are integral to fair proceedings. The customary standard of proof for civil proceedings, where both sides have something to lose and there is no reason to favor one side over the other, requires proof by a preponderance of the evidence, which is more than 50 percent. The preponderance of the evidence standard applies in all other sexual harassment proceedings and should apply here as well. Previous Department of Education guidance adopted that standard of proof. But the new regulation would allow schools to use a “clear and convincing evidence” standard, which favors the respondent by finding against complainants even where it is more likely than not that their account is accurate. There is no reason to weight the scales against complainants in civil disciplinary proceedings, and doing so will predictably result in findings for respondents even where it is more likely than not that the assault took place.

Universities would only be obligated to respond to complaints of sexual violence made to designated high-level officials.

Under the new rule, colleges and universities would only be obligated to take action if students make formal complaints to designated high-level school officials. If students reported their assaults to resident advisors, teaching assistants, coaches, or other school employees whom they know and trust, schools would not be obligated to intervene. Under prior Department of Education rules, schools were required to take action when students reported sexual violence to a much broader range of school employees — anyone whom a student would reasonably believe had the authority or responsibility to redress harassment.

School disciplinary proceedings would not become fairer under the proposed rule.

The ACLU has a long history of fighting for the rights of students facing unfair school discipline that pushes kids out of school and into the criminal justice system, with disproportionate effects on students of color, LGBTQ students, and students with disabilities. All students are entitled to fair disciplinary processes, but fair process should not be used as a fig leaf to roll back students’ right to learn in an environment that takes sexual harassment and assault seriously.

By raising the standard of proof and limiting the definition of sexual harassment and assault, the proposed rule will harm already-vulnerable students. Sexual assault and harassment can happen to anyone, though it disproportionately harms female students, students of color, students with disabilities, and LGBTQ students. In one study, nearly a quarter of undergraduate women reported experiencing nonconsensual sexual contact. These risks are even greater for women and girls of color, and they are less likely to report. Transgender students, LGB students, and students with disabilities also face disparate rates of harassment and assault.

The proposed rule comes after a long line of actions taken by the Trump administration to attempt to roll back civil rights for some of the most vulnerable students. The Department previously rescinded guidance outlining schools’ responsibilities to transgender students, and it began refusing to investigate transgender students’ claims. We can also expect to see continued attacks on transgender, nonbinary, and intersex people in future agency rules. This proposed rule is yet another attempt to constrict federal sex discrimination protections and limit the definition of sex-based harassment.

If you’re concerned about the Trump administration rolling back protections for students submitting complaints of sexual violence, it’s time to speak out. Before the rule can go into effect, the administration must review public comments on their proposal. Survivors, students, parents, educators, and other stakeholders should write comments demanding that the administration not turn its back on students who experience sexual harassment and assault while at the same time holding fast to fair procedures for both parties.