The Challenges of Breastfeeding as a Black Person 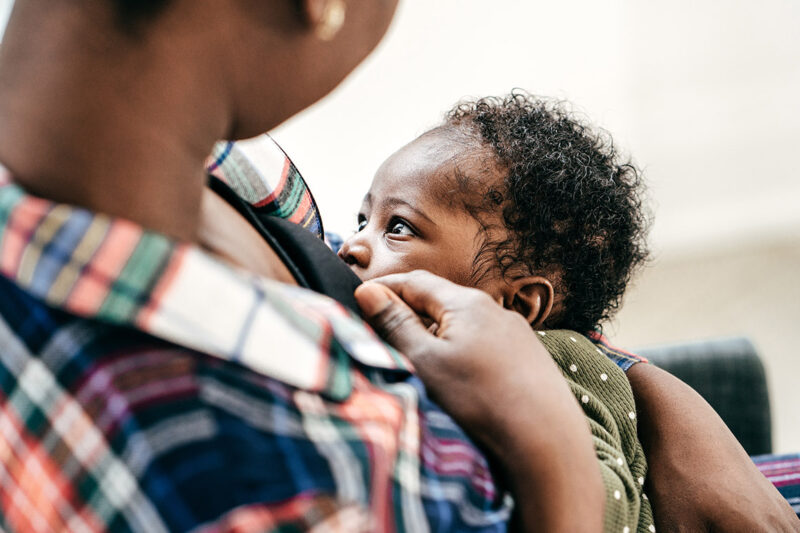 The fight to protect individual choices about reproductive care, including breastfeeding, is an ongoing battle. The central lesson of the reproductive justice movement is that choice means little without access. That lesson applies equally to breastfeeding.

In honor of Breastfeeding Awareness Month and Black Breastfeeding Week, let’s take a look at the barriers Black people face in the workplace, healthcare system, and society when it comes to breastfeeding.

Many Black people work, and breastfeeding at work is hard

Black women’s labor participation rate of 60.2 percent is higher than the rate for all other women. Additionally, Black women are most likely to be the primary economic support for their families, with 70.7 percent of Black mothers as sole breadwinners and 14.7 percent as co-breadwinners. This means that shortly after birth, many Black women experience economic pressures that motivate them to return to the workplace earlier than any other race.

Black people are also less likely than their white counterparts to occupy jobs that offer greater flexibility, economic stability, and better benefits, such as paid family leave, which is associated with a longer continuation of breastfeeding.

Although provisions of the Patient Protection and Affordable Care Act (ACA) require employers to provide break time and a private location to nurse, many employers fail to comply with this mandate. This is particularly true in low-wage jobs, of which a disproportionate number of workers are Black women, trans people, and non-binary folk. Additionally, due to intersecting race and gender discrimination, many Black workers may feel like exercising their right to breastfeed is too risky to be an option. Merely raising the issue of breastfeeding accommodations with an employer can create tension. Many who have done so have faced adverse consequences, reduced work hours, demotion, job loss, and public shaming or harassment in the workplace.

More Black women have Medicaid as health insurance or are uninsured compared to other groups. Although the ACA requires coverage of all recommended preventive services, including breastfeeding education, lactation consultation, and breast pumps, these benefits are not available for the majority of people in the 14 states – many of which with large Black populations – that have opted not to expand Medicaid. As we might expect, states that have expanded Medicaid have seen improved Black maternal and infant health outcomes.

Black neighborhoods are also lacking in hospital practices supporting breastfeeding. Forty-five percent of Baby-Friendly hospitals – those that have adopted a set of policies to ensure that their facilities are supportive of breastfeeding – are concentrated in cities where Black people comprise 3 percent or less of the population. Hospitals in communities with an above-average Black population are significantly less likely to promote nursing than hospitals located in other neighborhoods. Black women are also more likely to experience in-hospital formula introduction, which is associated with lowered breastfeeding rates.

The relatively low breastfeeding rate for Black people is a product of systemic racism that contributes to the overall poor Black maternal and infant health outcomes. To name a few, Black people experience the highest maternal mortality rate, highest infant mortality rate, one of the highest teen pregnancy rates, and lowest rate of contraception use. To effectively address inequitable health outcomes and access, we must promote policies that aim to improve the health of Black people across their life course.

Society has sexualized breasts to the point that people are routinely shamed for breastfeeding. Compounding this is the fact that Black bodies have been historically over-sexualized and degraded. The perception of Black women as sexually promiscuous by nature is a persistent stereotype that negatively impacts the sexual health and rights of Black women. Additionally, the traumatic history of Black women during and after slavery as wet nurses for white women means that for some, breastfeeding is associated with a lack of choice. This history contributes to whether Black people have the social and societal support to initiate and sustain breastfeeding.

Advocacy around breastfeeding has been primarily led by white, cis-gendered women, and consequently centered on issues specific to that group. It is unsurprising that the choice to breastfeed has been primarily available to upper-middle-class, cis-gendered white women. Creating a new narrative, health and advocacy groups that center on the experiences of women of color are leading the charge to formulate an agenda that is inclusive of the unique experiences of Black women, as well as trans and non-binary folks who breast- or chest-feed.

Certainly, there are strong public health reasons to implement policies promoting breastfeeding. But breastfeeding promotion can also result in the pressure to breastfeed, putting those who choose not to or are unable to breastfeed and those without the ability to exercise their rights in a particularly impossible position. Battles to safeguard breastfeeding rights must be accompanied by efforts that remove barriers to making that right something everyone can exercise on equal terms. Neither where a person lives, works, and gives birth, nor a person’s race or gender should determine whether they have the option to breastfeed.