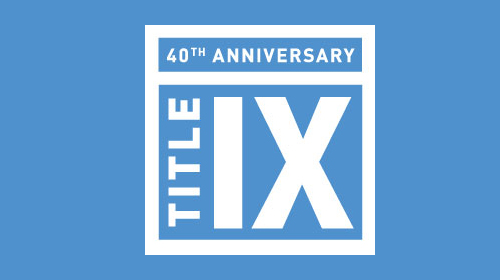 This week, as part of Women’s History Month, ACLU staff across the country will participate in a blog series about Title IX highlighting some of the core areas of educational equality that this landmark statute covers.

My high school girls’ soccer field wasn’t in the best shape. When it rained the field turned into a mud bath and we would slide around the water-logged field. The boys’ soccer field was so pristine the U.S. women’s soccer team had practiced there. While I knew in my gut that this was unfair, it did not occur to me that at a public school, this would be illegal.

Title IX, the groundbreaking federal law enacted in 1972 that prohibits sex discrimination in schools that receive federal funding, mandates gender equality in athletics, among other areas. It is one of the key reasons that women’s sports participation in high school and college has skyrocketed, increasing by 90 percent (by some estimates) over the past 40 years. Title IX’s mandate obliges schools to not only insure that girls and women have equal opportunities to participate in sports, but also requires that female and male sports are treated equally; in my case, this would have meant — quite literally — “evening the playing fields.”

However, in too many schools, Title IX’s requirement for gender equality in school athletics continues to be blatantly ignored. Recently, in 2010, the National Women’s Law Center filed complaints with the federal Education Department Office for Civil Rights against 12 school districts, including New York City and Chicago, for failing to provide equal opportunities for female high school students.

Luckily, individual students have the right to go to court to enforce their right to equal treatment, and the statute remains a powerful tool to remedy violations, despite relatively weak enforcement by the government (no school has ever had federal funds actually withdrawn for violation). In the last couple of years, courts have consistently reaffirmed schools’ obligations under Title IX to foster equality in athletics, leading to a stream of recent victories.

This year, for example, an over $1 million settlement was paid to former University of California, Davis, female student-athletes after a federal district court found the university liable for violating Title IX for not expanding athletic opportunities for women after they cut the women’s wrestling team. Last year, a district court found that Quinnipiac University had violated Title IX when it eliminated women’s volleyball — and later tried to replace it with a new “competitive cheer” program, to meet its Title IX obligations — and prevented the university from eliminating any other women’s sport until it comes into compliance with Title IX.

Title IX’s guarantee of equal treatment extends to areas including resources, scholarship funding, facilities, and scheduling. For example, this year, a court of appeals found that an Indiana high school’s sidelining of girls’ basketball games to non-primetimes to give boys’ games the primetime slots could violate Title IX. Last year a Michigan athletic league changed its policy to require the same number of referees in girls’ and boys’ basketball after the threat of a Title IX suit by the ACLU of Michigan (the league had originally justified this staffing reduction on the basis that girls were less aggressive players, and thus less likely to foul). Similarly in 2009, the NYC Department of Education agreed to move the high school girls’ soccer season from spring to fall, when the boys’ teams played, after the New York Civil Liberties Union threatened it with a Title IX lawsuit; the nontraditional scheduling denied the girls equal opportunities for college recruitment, scholarships, opportunities to compete with teams outside of New York City, and the chance to play competitive “club” soccer.

The benefits of girls playing sports are diverse and far-reaching. The New York Times highlighted two studies that show that the increase in girls’ athletic participation, the legacy of Title IX, results in lifelong improvements in women’s education, employment, and health. Thus, Title IX’s requirement of gender equality in athletics not only ensures that girls are not treated as second-class citizens and relegated to the sidelines (or the mud-bath fields), but has profound, sometimes life-changing, implications for our lives. It is imperative that we continue to fight to see the goals of Title IX fully realized as we celebrate its 40th anniversary.