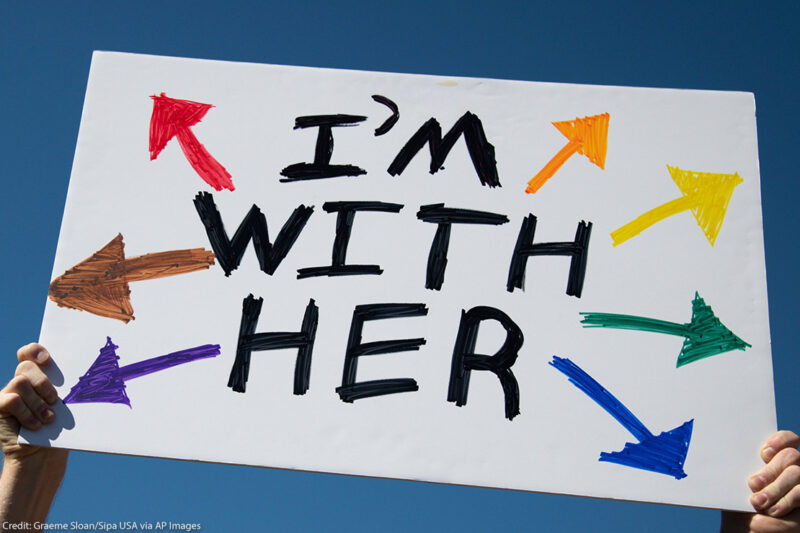 Many recent legal battles for the rights of trans and non-binary people are rooted in the same cases that pioneered women’s rights decades ago.

When Ruth Bader Ginsburg co-founded the ACLU’s Women’s Rights Project in 1972, she recognized that laws that stereotype by gender hurt everyone — no matter your gender. That’s why some of WRP’s early cases involved men who had been discriminated against — and it’s why many of our recent legal battles for the rights of trans and non-binary people are rooted in the same cases that pioneered women’s rights decades ago.

Today, WRP is headed by Director Ria Tabacco Mar. Below, she explains more about why women’s rights are inextricably linked to the broader fight for gender justice.

How has the ACLU’s women’s rights work evolved into a broader fight for gender justice?

The ACLU’s women’s rights work has always had a broader gender justice focus. Over the years I have worked closely with the LGBTQ project, and it’s through that work that I’ve learned precisely how interconnected our movements are — not just in the lived reality of people who are both women and LGBTQ, like myself, but even in the legal doctrine. So many of the cases that we are litigating in the LGBTQ space were built on early victories in women’s rights. Those were cases that were initially fought by cisgender women who were considered to be the wrong kind of women, either because they were mothers of young children or because they were, “too macho” and didn’t wear jewelry. Being fired because you’re a transgender woman is just another variation of the same problem.

Gender justice is really about ensuring that everyone has an opportunity to structure their lives and thrive, regardless of gender, unlimited by gender stereotypes.

Can you share an example of a seminal women’s rights case that laid the groundwork for broader gender justice?

The first Title VII case the Supreme Court ever heard involved Ida Phillips, a woman who was disqualified from a job because she was the mother of preschool children. Though she was a white woman, she was represented by the NAACP Legal Defense Fund, my old shop, because the lawyers rightly recognized that if Title VII — the law that makes it illegal for an employer to hire or fire someone based on their sex — failed to protect a white woman like Ida Phillips from discrimination based on sex, then employers would be able to evade discrimination protections based on race and other characteristics as well. The unanimous victory in that case laid the foundation for what we think of as modern anti-discrimination law.

Which groups are getting left out of conversations about women’s rights?

I was hopeful that the racial and gender inequities exposed by the pandemic would help bring about a stronger drive for change. Two years later, unfortunately, we are not seeing the level of urgency and action we hoped for. We’ve watched the federal eviction moratorium expire, knowing that millions of families are on the brink of potentially losing their homes. Many of those households are headed by Black women, who are not only facing destabilization of their families, but the potential lifelong consequences of having been evicted, which can make it harder to secure future housing, employment, and other essential needs and services.

What are some of the biggest challenges that the ACLU’s gender justice program is facing right now?

A major challenge is the lack of urgency that our community feels around some women’s rights issues. We’re facing so many entrenched disparities: equal pay, attacks on our reproductive freedom, lack of parity and caregiving work within the home, and underfunding women’s work outside the home. In some ways, these are the same problems that have plagued us for decades, certainly since the founding of the Women’s Rights Project and arguably for centuries as well. They’re so omnipresent that we almost don’t see them as vestiges of sexism and patriarchy. They structure almost every aspect of our lives. And yet, precisely because these inequities are everywhere, we don’t feel that same urgency that we may feel for other civil rights crises in larger, rallying moments.

What do you think lies ahead in the fight for gender justice?

What does achieving gender justice look like to you?

Watch a video of the interview below: