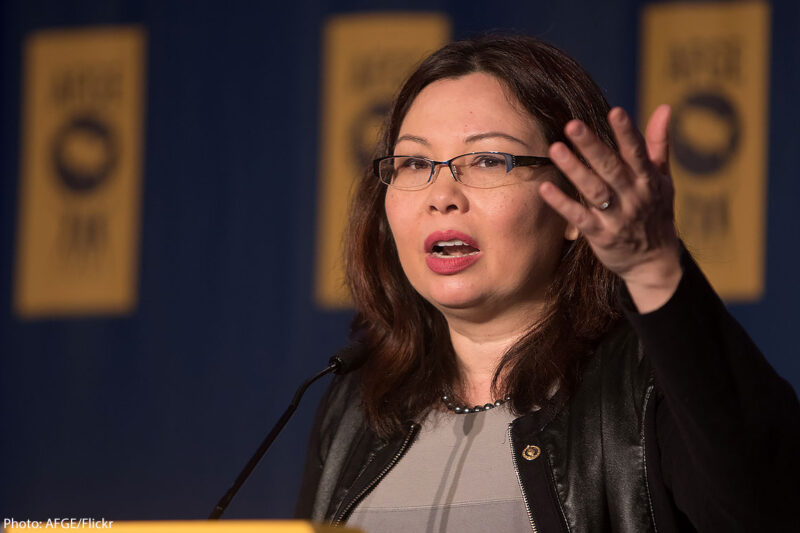 UPDATE: On April 18, the Senate voted in favor of a resolution submitted by Duckworth that will finally allow senators to bring newborns onto the chamber floor during votes. In a statement following the historic rule change, Duckworth said, “I would like to thank my colleagues on both sides of the aisle, particularly those in leadership and on the Rules Committee, for helping bring the Senate into the 21st Century by recognizing that sometimes new parents also have responsibilities at work.”

This week, U.S. Sen. Tammy Duckworth, Democrat from Illinois, made history by becoming the first senator to give birth while serving in office. But within that headline is a truth unworthy of celebration: Due to outdated Senate policies, Duckworth may be unable to vote on legislation while she’s on parental leave.

The problem stems from the interplay of two Senate rules: Senators must be physically present to cast votes, and they may not bring children onto the Senate floor. Coupled with the fact that senators are not covered by any formal parental leave policy, these rules highlight just how out of touch the Senate is with modern life. It’s unacceptable that our public servants have failed to welcome a world in which a senator weighing in on legislation may also happen to be breastfeeding or caring for a new baby.

Duckworth is unfortunately not alone in facing a conflict between caring for her child and doing her job. Indeed, countless working parents face far worse, including outright job loss. The problem is largely that businesses are still designed for people who don’t give birth and aren’t primary caregivers. In other words, employers still cater to the male workforce of a century ago.

From pregnancy through parenthood, workers today face widespread discrimination despite laws such as the Pregnancy Discrimination Act (PDA), which was enacted 40 years ago, and the Family and Medical Leave Act (FMLA), which Congress passed in 1993.

For instance, our client, Illinois police officer Jennifer Panattoni, was forced to take roughly 7 months of unpaid leave when she was pregnant because her department wouldn’t temporarily reassign her from patrol duties. They refused her request for desk work even though the department routinely reassigns workers with other medical conditions that interfere with patrolling.

Katia Hills, a young mom in Indiana, is the lead plaintiff in our class action challenging AT&T Mobility’s punitive attendance policy. After taking time off for medical appointments, Hills lost her job because the company didn’t make any exceptions for pregnancy-related absences despite excusing other kinds of absences.

We also represent a class of female dockworkers up and down the west coast, whose ability to access high-paying union jobs is stymied by a discriminatory policy. The women’s seniority freezes when they take pregnancy-related leave, while coworkers absent due to on-the-job injuries or military service face no such penalty.

Workplace discrimination often continues after employees give birth. Those who are breastfeeding and return to the job, for instance, are often faced with employers who refuse to provide a safe, clean place to pump breast milk. This was the case for the flight attendants and pilots at Frontier Airlines, which offers no paid maternity leave or accommodations for employees who are nursing. As a result, many Frontier pilots and flight attendants have been forced to choose between going on unpaid leave and suffering the often painful consequences of being unable to pump milk at work.

Further, workplaces fail to provide parents the security they need to take care of their children and themselves. Although the FMLA provides 12 weeks of unpaid leave, only 60 percent of American workers are eligible under the law. Because there is no federal requirement for paid parental leave, only 13 percent of private sector workers have access to such a benefit.

Moreover, leave is gendered in a way that limits parents’ ability to care for their children. Sex stereotypes and discriminatory leave policies often make fathers ineligible for parental leave or unable to take such leave as a practical matter. This forces women to assume the role of primary caregiver regardless of what might be best for them and their families.

It is time our workplaces — including the U.S. Senate — adapt to meet the current reality: People who work may get pregnant, may need time off for caregiving, and may return to work while they are breastfeeding. These human conditions should not deprive them of the opportunity to continue to work if they are eager and able to do so.