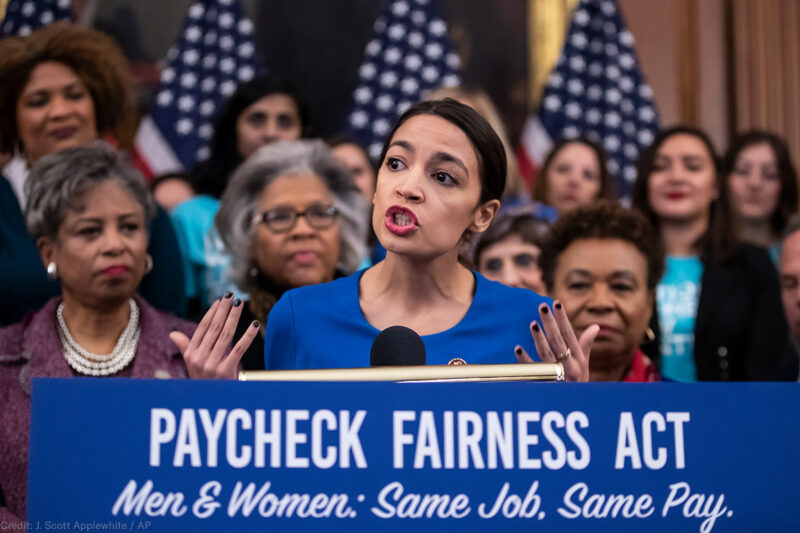 More than 55 years after the Equal Pay Act was passed, women working fulltime and year-round, on average, are paid only 80 cents for every dollar paid to their male counterparts. The disparity for women of color is even more severe. This wage gap has remained stagnant for years and continues to squeeze women’s pocketbooks, erode their earning potential, and deprive them of the means to improve their own lives and support their families.

It’s long past time to update the Equal Pay Act to give working women the legal tools they need to challenge discrimination and to encourage employers to comply with the law. That’s exactly what the House of Representatives is poised to do when it takes up the Paycheck Fairness Act (H.R. 7) this week.

Here are the top 5 reasons why we need the Paycheck Fairness Act:

About 60 percent of workers in the private sector are either contractually forbidden or strongly discouraged from discussing their pay with colleagues. Additionally, employees are dissuaded from obtaining information that would prove pay discrimination.

These kinds of punitive pay secrecy policies enable wage discrimination not only to persist, but to become institutionalized. Although there are currently a few measures that bar some employers from punishing employees who discuss their salaries with colleagues, the Paycheck Fairness Act would broadly prohibit retaliation for wage disclosures and for seeking legal recourse. No one should fear being fired simply because they made a complaint, started an investigation, asked questions about their employer’s wage practices, or disclosed their own salary.

Numerous studies have shown that the gender wage gap begins early in a woman’s career or work life, widens over time, follows her from job to job, and robs her of hundreds of thousands of dollars over decades. Employers who inquire about and rely on prior salary when setting the salary of new hires (or promotions) contribute to this problem and perpetuate the gender wage gap. By relying on a woman’s previous salary — which was likely lower because of historical bias and discrimination — the employer entrenches the pay discrepancy and continues to underpay her.

The Paycheck Fairness Act would end this practice by prohibiting employers from using salary history as a way to set salaries for job candidates. It would also ban them from requesting salary history from applicants or previous employers (though it would allow job applicants to provide their salary as part of the negotiation process after a job offer has been made).

To that end, the Paycheck Fairness Act requires the Equal Employment Opportunity Commission to collect compensation data from employers — by sex, race, and national origin — in order to better identify discriminatory practices or patterns. It also authorizes the U.S. Department of Labor to conduct research, implement a survey of federal contractors’ compensation data, and use investigatory tools that can help root out wage discrimination.

The Paycheck Fairness Act would provide businesses with support and encouragement as they strive to eliminate wage discrimination. The bill requires the Department of Labor to provide information to employers and to recognize and promote the achievements of employers, including bestowing a National Award for Pay Equity in the Workplace on an employer that has made substantial efforts to eliminate pay disparities between men and women.

Equally important, the act would strengthen the penalties that could be imposed against an employer when pay discrimination is proven. Currently, an employee who proves an Equal Pay Act violation can only recover back pay and an equal amount in liquidated damages. These limited remedies do not sufficiently deter discriminatory pay practices. Under the Paycheck Fairness Act, employees would be able to recover compensatory damages (money to compensate for injury or loss) and punitive damages (money to punish and deter) — the same kinds of remedies available for other civil rights violations.

In 2017, the median annual earnings for women working full time all year was $41,977 while the median income for men under the same circumstances was $52,146. While the average pay gap for white women is 80 cents on the dollar, it is 62 cents for Native Hawaiian and Pacific Islander women, 60.3 cents for African-American women, and 53 cents for Latina women. A college educated woman will lose almost $800,000 in income by the time she turns 59, and the wage gap will cost women and their families nearly $900 billion a year.

Millions of women are the primary breadwinners in their households and these wage losses affect their families’ health, welfare, and economic security. By understanding and acknowledging these cold hard numbers, the Paycheck Fairness Act sets forth a path toward eliminating wage discrimination and achieving pay equity.

For all these reasons, and many more, after the House passes the Paycheck Fairness Act this week, we must push for the Senate to do the same. The time for change and equal pay has come.