What Does Mike Pence’s ‘No Girls Allowed’ Rule Have in Common With School Dress Codes and Single-Sex Classrooms? Exclusion, Shaming, and Victim-Blaming. 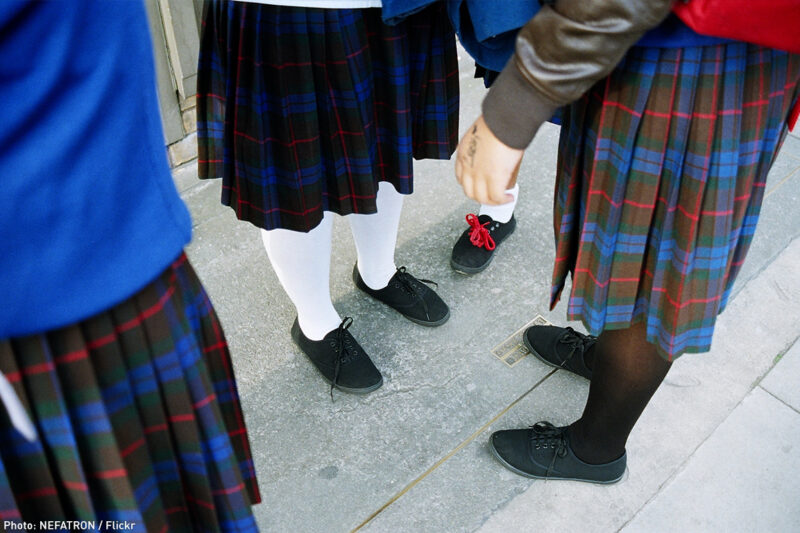 Of all the shockingly retrograde views about gender that the past year has brought us, a top contender is the revelation of Mike Pence’s policy of refusing to dine with women unless his wife is present.

As commentators have been swift to point out, this policy is deeply problematic. It reduces women to the role of temptress, blaming them for male transgressions from marital infidelity to sexual assault, while relying on the equally demeaning assumption that men are incapable of controlling their sexual impulses. It is also discriminatory in the context of the workplace, depriving female employees of critical opportunities for networking, mentoring, and face time.

Discrimination under the guise of chivalry — sometimes called “benign protectionism” — is hardly new. Women have been “protected out” of jobs and educational opportunities … well, pretty much forever. Laws against sex discrimination have eradicated some of the most blatant examples, like policies prohibiting women from entering certain professions or excluding women and girls from educational institutions. But as Pence’s “No Girls Allowed” rule shows, these archaic views about gender persist.

Unfortunately, benign protectionism not only runs deep, it also starts early. Here are some examples of how these attitudes still play out in the school context today, in surprisingly blatant ways.

Perhaps the most common example is the use of school dress codes that impose different standards based on sex. These may sound benign initially, but they rest on some of the exact same attitudes and stereotypes epitomized in Pence’s personal policy.

The ACLU is currently challenging a dress code at a K-8 public charter school in North Carolina that requires girls to wear skirts and prohibits them from wearing pants. As the school’s founder, Baker Mitchell, explained, the requirement was instituted “to preserve chivalry and respect among young women and men.” In his deposition, Mitchell elaborated further on the meaning of chivalry in this context: A woman is “regarded as a fragile vessel that men are supposed to take care of and honor.” (Meanwhile, a school board member argued that the requirement would prepare students for a workplace where they might have to follow gendered dress codes, providing as his first example the restaurant chain Hooters — a vision of “respect” that is perhaps more Trumpian than Pencian).

Discrimination under the guise of chivalry — sometimes called “benign protectionism” — is hardly new.

Our clients argue that the skirt requirement leaves them uncomfortably cold in the winter time, distracts them during class for fear of boys looking up their skirts, and inhibits them from engaging in activities during recess like playing soccer, climbing the monkey bars, and doing cartwheels, all for fear of showing their underwear or being reprimanded for being unladylike. That our clients would rather be treated as kids than “fragile vessels” has apparently not swayed the school administration.

Just last week, a federal judge rejected the school’s request to dismiss the case, finding that our clients had valid claims for sex discrimination under both Title IX, the federal law prohibiting sex discrimination in public schools, and the constitutional guarantee of equal protection. This builds on similar victories in ACLU cases challenging gendered dress codes for special events like prom and yearbook photos.

Even when dress codes seem gender-neutral, they are frequently used to police girls’ bodies — sending the message that girls are a “distraction” to boys or men. They are often disparately enforced against girls, students of color, LGBT students, or students of different sizes. And enforcement means students may be sent home from school or forced to “cover up” — in other words, excluded, shamed, and victim-blamed.

Perhaps the most literal reflection of Pence’s policy in action is the current trend of separating boys from girls in coed schools into single-sex classrooms. Despite the lack of valid evidence of efficacy in improving outcomes, this model is presented as a panacea for a host of social woes, from gender-based harassment to high disciplinary incidents to low academic performance to high rates of teenage pregnancy. The justification should sound familiar: Teenage boys simply can’t concentrate on academics when girls are present.

Because this strategy is disproportionately implemented in communities of color, racial stereotypes play a role as well: The implication is that boys and girls of color are uniquely unable to succeed in a coed environment. The proposed solution is not to equip girls and boys to collaborate, learn, and work as equals, but rather it is to exclude the (overly sexualized) girls from the classroom altogether so the (out-of-control) boys can focus.

These stereotyped attitudes violate the law when they play out in schools funded by taxpayer dollars — and we don’t intend to sit idly by. As for Vice President Pence, if his policy of excluding, blaming, and shaming women is reflected in either White House employment practices or educational policy initiatives, we may well see him in court.

If you or your child has been targeted by a discriminatory dress code or separated from their peers in a single-sex classroom, we want to hear from you. Tell us your story