Can Schools Discipline Students for Protesting?

Students around the country are turning the heartbreaking school shooting in Parkland, Florida, into an inspiring and exemplary push for legislative change. In the last few days, many people have asked whether schools can discipline students for speaking out. The short answer? It depends on when, where, and how the students decide to express themselves.

Plans for coordinated student walkouts have been making national news and have already engendered disciplinary threats from some school administrators. Since the law in virtually all jurisdictions requires students to go to school, schools can typically discipline students for missing class, even if they’re doing so to participate in a protest or otherwise express themselves. But what the school can’t do is discipline students more harshly because they are walking out to express a political view or because school administrators don’t support the views behind the protest. In other words, any disciplinary action for walking out cannot be a response to the content of the protest. 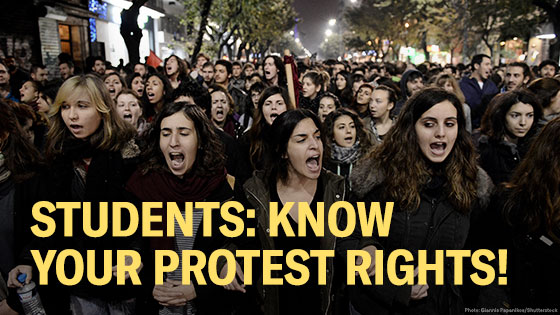 Before deciding whether to join a political walkout, students might want to find out what policies govern discipline for absences in their state, school district, and their particular school so that they’re aware of the potential consequences. They should also know that in addition to walkouts, there are actions they can take for which schools cannot legally impose punishment.

We hope schools recognize that even when they are within their right to discipline students for protests, that doesn’t always mean they should.

For example, during school hours, students cannot be punished for speaking out unless their speech disrupts the functioning of the school. This is because — as the Supreme Court recognized in a 1969 decision upholding the right of Mary Beth Tinker to wear an armband to school in protest of the Vietnam War — students do not lose their constitutional rights “at the schoolhouse gate.” This makes sense given the educational purpose of our school system. As the court held in an earlier decision finding that students cannot be obligated to salute the flag, students’ speech rights must be “scrupulously” protected if we are to have any hope of “educating the young for citizenship” and teaching students not to “discount important principles of our government as mere platitudes.”

While what qualifies as “disruptive” will vary by context, courts have typically held that students have the right to wear expressive clothing that doesn’t target fellow students or disrupt class. In addition to Tinker, the ACLU has successfully represented students asserting their rights to wear clothing expressing anti-abortion views, support for the LGBT community, and even opposition to the ACLU itself.

Outside of school, students enjoy essentially the same rights to protest and speak out as anyone else. This means that students are likely to be most protected if they organize, protest, and advocate off campus and outside of school hours. Some schools have attempted to extend their power to punish students even for off-campus, online expression. While courts have differed on the constitutionality of such punishments, the ACLU has challenged such overreach.

We clearly have a lot to learn from the students from Marjory Stoneman Douglas High School and their peers nationwide. Their activism inspires confidence in the future of our democracy, and their schools should be proud of them. We hope those schools recognize that even when they are within their right to discipline students for protests, that doesn’t always mean they should.

How to Start a Banned Book Club

Making Space for Black History in the Classroom