ACLU Forum: Technology and the Future

Our new speaking series, The Forum on Technology and the Future, features a variety of experts discussing cutting-edge technologies and their implications for the future of civil liberties. Audio and/or video of these events are also archived for download. 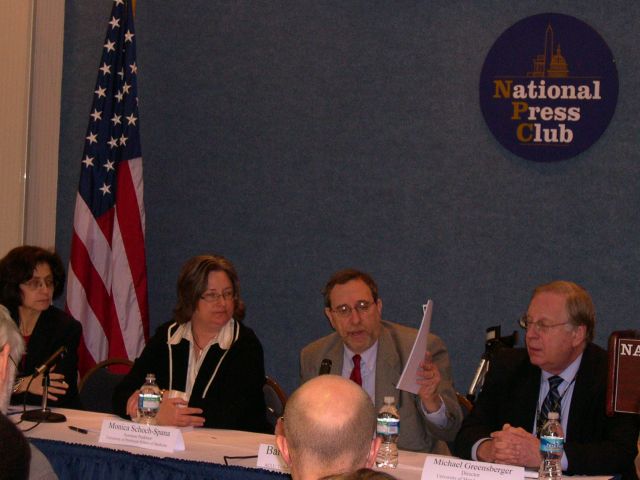 The threat of a drug-resistant strain of bird flu has sparked fears about the potential for a global pandemic. How would our society respond? And how should we prepare for such an emergency? With panic and quarantines, or with sound, disciplined public health policies and a respect for individual rights? Three of the nation's top experts will have a conversation at the National Press Club to discuss the findings of an ACLU-commissioned report on the intersection of science, medicine, security and civil liberties in confronting a flu pandemic.

Michael Greenberger is the Director of the Center for Health and Homeland Security (CHHS) at the University of Maryland and a professor at the School of Law.

Monica Schoch-Spana, PhD, a medical anthropologist, is Senior Associate with the Center for Biosecurity of the University of Pittsburgh Medical Center (UPMC) and Assistant Professor in the School of Medicine Division of Infectious Diseases.

Barry Steinhardt, Director of the ACLU’s Technology and Liberty Project will moderate the discussion.

Imagine that a company offered you $1,000 to drink a pesticide. Would you take it? Did you know that testing pesticides on humans was even allowed?

The Environmental Protection Agency (EPA) last year issued rules for accepting data from researchers who intentionally expose human subjects to pesticides. These are non-therapeutic experiments that are not conducted to help fight disease or improve human safety; typically they are conducted by chemical companies that are trying to convince the EPA to increase the amount of pesticide residue that is allowed on fresh fruits, vegetables and processed foods. EPA’s regulations are the first that encourage companies to perform human experiments for the purpose of improving the profits of pesticide companies.

This forum will explore the history and evolution of the EPA ruling as well as its legal and ethical ramifications. We will consider the following questions:

Does intentional pesticide dosing of humans conflict with established ethical codes for human experimentation, such as Nuremburg and Helsinki?

What protections does the EPA rule allow for such experiments?

Are special protections provided for prisoners or other institutionalized individuals?

Why would individuals undergo such experiments given that there are no expected therapeutic benefits?

Should the EPA accept data from past experiments even if they were conducted in an unethical manner?

Sheldon Krimsky is a Professor in the Department of Urban & Environmental Policy & Planning at Tufts University and a Visiting Scholar-In-Residence at the ACLU.  He is the author of eight books, including Genetic Alchemy: The Social History of the Recombinant DNA Controversy (MIT Press, 1982), Biotechnics and Society: The Rise of Industrial Genetics (Praeger, 1991), Hormonal Chaos: The Scientific and Social Origins of the Environmental Endocrine Hypothesis (Johns Hopkins University Press, 2000), and Science in the Private Interest: Has the lure of profits corrupted biomedical research? (Rowman & Littlefield Pub., 2003). Professor Krimsky holds numerous advisory and editorial board positions and currently serves on the Board of Directors for the Council for Responsible Genetics and as a Fellow of the Hastings Center on Bioethics.

Michael E. Wall is a Senior Attorney with the Natural Resources Defense Council (NRDC), where he heads the organization's San Francisco-based litigation team.  Mr. Wall has litigated an array of major cases to protect human health, preserve endangered species, and restore western waterways.  Prior to joining NRDC, Mr. Wall practiced constitutional, labor, and environmental law at a boutique law firm in San Francisco and, from 1994 to 1998, served in the Environment and Natural Resources Division of the U.S. Department of Justice.  Mr. Wall graduated magna cum laude from both Harvard College and Harvard Law School and clerked for the Honorable Edward E. Carnes on the U.S. Court of Appeals for the Eleventh Circuit.

Barry Steinhardt, Director of the ACLU’s Technology and Liberty Project, will moderate the discussion.

Over the past fifteen years, the United States has witnessed an extraordinary expansion in the banking and mining of DNA for law enforcement purposes. Recently, the U.S. Congress as well as several state legislatures voted to allow for the permanent retention of DNA from persons who are arrested. These dramatic expansions have occurred with little regard for the tremendous threats they pose to individual privacy and racial justice. At the same time, such expansions threaten to overburden crime laboratories and undermine quality assurance in DNA testing and analysis. This panel will consider these and other concerns related to our criminal justice system's increasing reliance on DNA collection and analysis.

Barry Scheck is a Professor of Law at Cardozo Law School in New York City and Co-Director of the Innocence Project, which uses DNA evidence to exonerate the wrongly convicted. Since 1994 he has been a Commissioner on New York State’s Forensic Science Review Board, a body that regulates all crime and forensic DNA laboratories in the state. From1998 - 2000, he served on the National Institute of Justice's Commission on the Future of DNA Evidence.

Helen Wallace, Deputy Director of Genewatch UK, specializes in the ethics, risks and social implications of human genetics. She has a degree in physics from Bristol University and a PhD in applied mathematics from Exeter University. She has worked as an environmental scientist in academia and industry and as Senior Scientist at Greenpeace UK, where she was responsible for science and policy work on a range of issues.

William C. Thompson, J.D., Ph.D. is Professor and incoming Chair of the Department of Criminology, Law & Society at the University of California, Irvine (UCI) and a member of the California Bar.  He writes about the use (and misuse) of scientific evidence, particularly DNA tests, and about jury decision making.

Tania Simoncelli, Science Advisor to the ACLU, counsels the organization on emerging developments in genetics and neuroscience and their implications for civil liberties. She also serves on the Board of Directors of the Council for Responsible Genetics.

Barry Steinhardt, Director of the ACLU's Technology and Liberty Project will moderate the discussion.

Recent developments in the application of functional Magnetic Resonance Imaging (fMRI) to lie detection raise tremendous concerns for civil liberties. The federal government has invested heavily in a range of technologies and devices, including fMRI, for their use in detecting deception. At least two companies have recently announced that they will soon offer lie detection services using fMRI and are aggressively marketing their services to private companies and government agencies for everything from personnel screening to interrogating terror suspects.

The panel will consist of some of the top thinkers on both the science and policy aspects of this issue:

The panel will be moderated by Barry Steinhardt, Director of the ACLU Technology & Liberty Project.

Bruce Schneier is an internationally renowned security technologist, referred to by The Economist as a "security guru." He is the author of eight books — including the best sellers Beyond Fear: Thinking Sensibly about Security in an Uncertain World, Secrets and Lies, and Applied Cryptography, — and hundreds of academic articles and papers. His influential newsletter, Crypto-Gram, is read by over 120,000 people. Schneier is regularly quoted in the press, and his essays have appeared in national and international publications. He is the CTO and founder of Counterpane Internet Security, Inc., and the author of the popular Blowfish and Twofish encryption algorithms. He is also a frequent guest on television and radio, has testified before Congress, and is a frequent writer and lecturer on issues surrounding security and privacy.