On May 11, President Trump signed an executive order establishing the “President Commission on Election Integrity.” The commission was formed following Trump’s repeated claims, without evidence, that he won the 2016 popular vote, once millions of illegal votes were deducted. The commission vice chair is Kansas Secretary of State Kris Kobach, whom the ACLU has successfully challenged in court numerous times over his voter suppression policies.

On June 28, Kris Kobach sent letters to state representatives seeking details on every registered voter in the country. Kobach has not indicated how the commission would use the information it gathers, which includes names, addresses, birthdates, political affiliation, last four digits of Social Security numbers, and voting history. However, the commission does reportedly plan to make all those details widely available.

It’s an unprecedented request for private information, that given Kobach’s record, would likely be used to suppress the vote. The ACLU has called on Governors and Secretaries of State to refuse to comply. Many states across the country, led by both Republicans and Democrats, have done just that, recognizing the lack of evidence to justify such a request.

The commission’s first meeting will take place on July 19 in Washington, D.C. 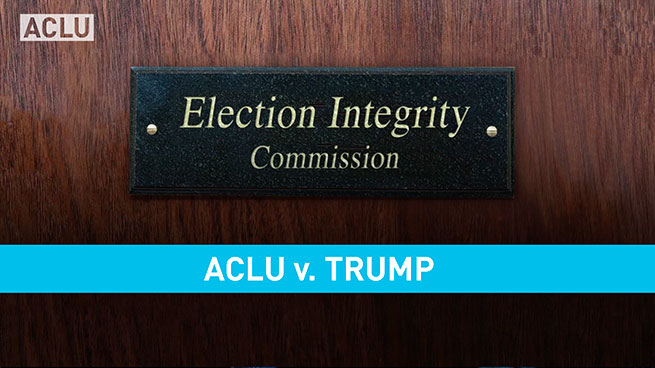 If You Care About the Right to Vote, Here Are Six Things You Need to Know About Kris Kobach (May 17, 2017)

ACLU Comment on Trump Administration’s Effort to Gather Details on All Voters in America (June 30, 2017)

ACLU to Trump: Signing Order Will Not Make Voter Fraud Fantasy a Reality (May 11, 2017)