Cole v. Arkansas - About Our Plaintiffs and Their Families 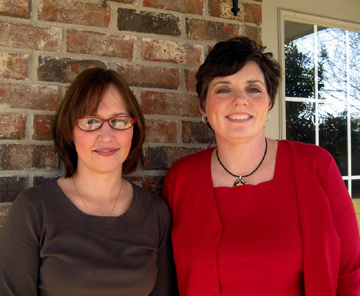 Sheila lives in Tulsa, Oklahoma with Jennifer, her partner of 11 years. They both work as registered nurses and are raising Mia, Jennifer's 5-year old daughter who the couple conceived through in vitro fertilization, together. Sheila is 41 and Jennifer is 40. The couple's parents are very supportive of their relationship, as are their coworkers.

Sheila has an adult daughter from a previous relationship who lives in Bentonville, Arkansas. Sheila's daughter had a baby girl in May of 2008 who was placed in the Arkansas foster care system when she was two months old. Sheila, the only relative who was able to take in the baby, was barred from adopting her granddaughter in Arkansas because of Act 1. The baby was eventually placed with Sheila, Jennifer and Mia, and is thriving in their family. 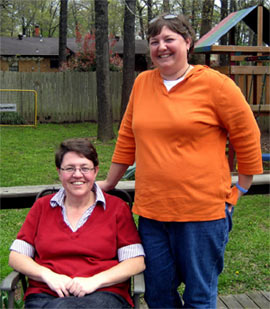 Stephanie, 41, and her partner Wendy, 38, are both professors at the University of Central Arkansas in Conway. They have been together for 12 years and have known each other since they were in high school, though their relationship didn't begin until they became re-acquainted in the late 90's.

In October of 2003, the Arkansas Department of Children and Family Services (DCFS) placed a special-needs boy, then two years old, with Stephanie. Tyler, who is now 9 years old, has learning disabilities, suffers from seizures, and is hearing impaired. Both partners went through the DCFS background check and were listed in their adoption application. That same year, Wendy gave birth to their other son Keegan. Stephanie was taking the required classes for prospective adoptive parents at the same time Wendy found out they were expecting. Tyler's adoption was finalized in May of 2004. Stephanie and Wendy have been working with a neurologist, a nutritionist, and a hearing specialist in addition to Tyler's pediatrician, and he's thriving in their care.

Stephanie and Wendy are very involved in the boys' school. They participate in parent activities, book fairs, and other school activities, especially those that help children with special needs. They plan to work with some local groups to start an intramural sports program for children like Tyler. Tyler loves Monsters Inc., Scooby-Doo, and football; Keegan adores soccer and Star Wars. The family has three dogs, a camper and a ski boat. In warm weather they go to the lake often; Tyler and Keegan especially love to swim. The family also uses the camper to take road trips in the summer.

Stephanie and Wendy are interested in adopting another child, or perhaps a pair of siblings, and they are open to welcoming another special-needs child into their home. They applied and were approved to adopt another child through DCS, but were unable to do so before Act 1 was passed. 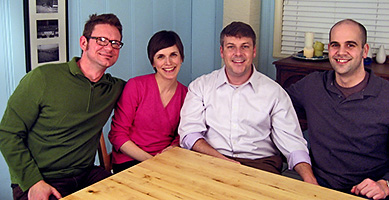 Frank, originally from New Jersey, is 30 and works as a market researcher. Matt, 38, works as a data analyst for an insurance company. They have been together for 10 years and live together in Little Rock.

Matt's cousin, Meredith Scroggin, a social worker who also lives in Little Rock with her husband Benny, has named the couple as guardians of her two daughters, ages 5 and 3. Meredith says Frank and Matt have a great relationship with the girls and that the couple have a stable, loving, kind, respectful relationship. The Scroggins family sees Frank and Matt every other week or so; the girls call them Uncle Matt and Uncle Frank. If something were to happen to Meredith and Benny, they want Frank and Matt to be able to adopt the children.

Frank and Matt started talking about having children a few years ago. Matt and Meredith come from a big family and Matt says that one part of why he and Frank started discussing kids was when relatives like Meredith and Benny began starting their own families. They looked into surrogacy, but eventually started thinking more about fostering and adopting because surrogacy is so expensive and with fostering or adopting they could give a loving home to a child who really needs one. Worried about Act 1, they decided to wait until they knew what would happen with the initiative.

Susan, 36, and her husband Chris, 39, live in Fayetteville and have two children they adopted from Ukraine in 2005. Susan has a law degree and is a fundraiser for a local nonprofit organization, and Chris is an attorney for an investment firm. The children, Nicolai and Natasha, are now ages 13 and 11.

If something were to happen to Susan and Chris, they would want their gay friends, Rick Shelton and Chris Shields, who are like uncles to their children, to adopt Nicolai and Natasha. Rick, 50, is a realtor and landscape architect and Chris S., 42, is a visiting assistant professor at the University of Arkansas. The couples have been close friends since meeting when Chris M., Susan, and Chris S. were in law school. Rick, a Navy veteran, was studying landscape architecture at the University of Arkansas when he met Chris S. at a Christmas potluck in 1997. Susan met Chris M. at a law school party in 1998.

Rick and Chris S. would also like to start a family of their own. They've talked about having children for years, but they are daunted by the many obstacles to starting a family. They worry that they may have to leave Arkansas to start a family because of Act 1.

Rick and Chris S. have been a part of Susan and Chris M.'s children's lives from the beginning. When Susan and Chris M. went to Ukraine four years ago, they had planned to adopt an infant, and had set up a room with a crib and baby clothes. They ended up instead with Nicolai and Natasha, a brother and sister who were 6 and 8 years old at the time. Rick and Chris S. got together with Susan's mother and some other friends to prepare the Duell-Mitchell home for their arrival  painting the children's rooms, purchasing beds, and filling the rooms with clothing and toys. It was all a surprise for Susan and Chris M. and their new family.

The two couples see each other at least weekly, especially in the summer when the children love to swim in Rick and Chris S.'s pool. The children call Chris "Uncle Jimmy," because he is 6'9" and Nicolai says he's "like a Jungle Gym." Once, when Nicolai and Natasha complained to their mother that they weren't seeing Chris S. as often as they liked, she explained that he was working on his doctoral dissertation. After considering this for a few moments Nicolai observed, "Oh... he has homework!" Natasha has also named all her Ken dolls Rick. 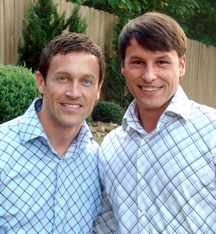 Curtis Chatham, 38, works as a speech therapist and lives in Little Rock with his partner of seven years, Shane Frazier, 35, a hospital administrator. Curtis and Shane have talked about adopting a child for some time, and they say they started talking about it more seriously after a private child placement organization visited their church and talked to the congregation about the need for good homes for the many children in need in Arkansas.

After that, the couple visited the DHS website and found a child they wanted to adopt, a boy whose four siblings had all been adopted but he hadn't been placed because, at age 12, he was a little older than the others. Curtis and Shane prayed together and talked about it for a few days, and then made plans to go into the DHS office to start the process for adoption the day after the election, hoping that Act 1 wouldn't pass.

In addition to wanting to adopt a child of their own, Shane's sister has a daughter with special needs. If something were to happen to her, Shane's sister would want either Curtis and Shane or her and Shane's other sister  who is a lesbian living with her partner - to adopt her.