Deane and Polyak v. Conaway
About the Plaintiffs 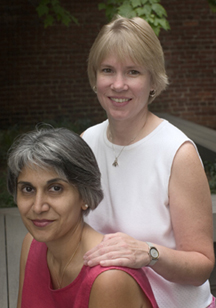 Gita and Lisa met their freshman year at Trinity College in Washington, D.C.  As a citizen of India, Gita was in the United States on a student visa.  When they fell in love and wanted to build a life together, it was apparent immigration laws would force them apart.  Had Lisa and Gita been recognized as spouses, they could easily have remained together.  Because they couldn't marry, the couple embarked on a years-long odyssey to establish residency for Gita.  There were many anxious moments -- like a deportation notice and a tearful goodbye at JFK airport - when the distraught couple did not know if Gita would ever be able to return to the United States.  Fortunately, Gita received a work sponsorship and was granted full U.S. citizenship in 1994.  But Gita and Lisa want marriage rights to further protect their relationship and children from other harms, and to ensure that no loving couple will have to be torn apart because of political borders.

The family attends Brown Memorial Presbyterian Church in Baltimore, where Gita and Lisa teach Sunday School, and where their daughters were baptized.  Gita and Lisa enjoy traveling together as a family, especially to the beach. 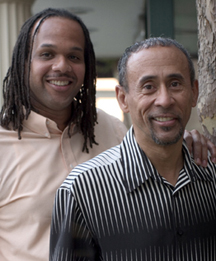 Alvin (right), 51, is a dentist in private practice after retiring from the U.S. Army where he was a dental officer.  Nigel, 37, is a program manager for the U.S. Environmental Protection Agency.  Nigel previously served in the U.S. Army National guard as a military police specialist.

They live in Upper Marlboro in Prince George's County and have been together for eight years.  They have adopted three children: a daughter, 10, and two sons, both nine.

Both Alvin and Nigel are active in community service, serving on the board of directors of  ""Us Helping Us"" - an HIV/AIDS service organization committed to reducing HIV infection in the African-American community.  Alvin and Nigel also attend worship services at Covenant Baptist Church.  They met at a discussion group for black gay men.  ""It was love at first sight,"" Alvin says.

""I have long felt as married as anyone who loves and lives with their spouse, raises kids, owns a home, and even drives a minivan,"" Nigel says.  ""Although we are a family in every way imaginable - a family with one military veteran and one federal employee - we are not fully protected as a family under the law."" 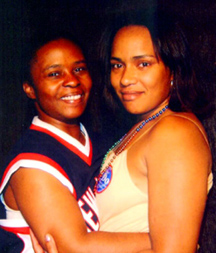 Takia (right), 31, is an administrative assistant for a hospital laundry services company.  Jo, 39, is a Baltimore city bus driver for the Maryland Transit Authority.  Takia and Jo live in Baltimore and have been together for over three years.  They had a commitment ceremony in 2004 and are raising Takia's biological children, a 13-year-old daughter and an eight-year-old son.

As an employee of the State of Maryland, Jo cannot enroll Takia or the children in the state health plan.  Until recently, Takia and her children were forced to go without insurance because she was working part-time.  Now that she is a full-time employee, she and her children are covered, but the insurance is inferior to the coverage Jo receives from the state.  Being without insurance took its toll on the family.  Takia's son has asthma, which forced Takia and Jo to struggle with whether they could afford medical care for their son.

In 2003, Jo had an emergency gallbladder operation at a Baltimore hospital, and Takia was barred from seeing Jo or receiving any information about Jo's condition.  Takia was forced to sit in the waiting room and worry about Jo's well-being.  Had they been married, Takia could have participated in discussions with hospital staff about Jo's care.

The couple also worries that if Jo were killed in an accident on her bus route, Takia and the children would not receive death benefits that are available to help the surviving families of MTA employees killed on the job. 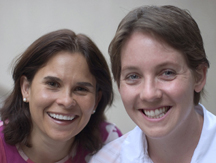 Donna (right), 32, recently received a Master's degree in writing at John Hopkins and works as a freelance writer and editor.  Maria, 37, is the outreach director for a luxury hotel development company in Costa Rica.

They used to live in Silver Spring and had hoped to move to Hollywood in Southern Maryland to build a home on the family farm owned by Donna's parents.  They have known each other nearly six years.  But immigration law is keeping them apart.  Maria, originally from Costa Rica, had to leave the U.S. in 2003 after receiving her education and legally working in this country for 13 years.

Now, Maria stays in Costa Rica and Donna visits as much as she can, but her time there is limited to tourist visas.

Donna and Maria met playing roller hockey in 1999.  They became a committed couple in 2002.  All they want to do is devote their lives to and love each other.  They hope that marriage will allow them to stay together.

""I realize that being able to marry in Maryland would only be the first step in solving our immigration issue, but at the very least it will serve as a salve to soften the injustice we face,"" Donna says.  ""I love Maria for who she is and how she makes me feel.  We will always be together.  The question is, where?"" 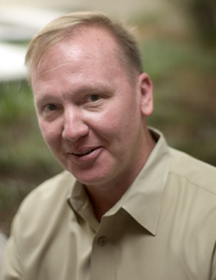 John, 40, is the chief code compliance officer for the City of Hagerstown in Western Maryland.  He previously worked as a police officer and deputy sheriff in Virginia.  John's late partner Jim died suddenly in 2003 at 33.  Jim had worked in the hotel industry as an internal auditor.  They had been together nearly 14 years.

Jim's wishes were to have his body cremated and his ashes scattered.  He did not want a gravesite.  Jim's family desired internment in his birth state.  Because the will, which named John as executor, was defective and because they were not married, John was treated as a legal stranger to Jim and had to negotiate a compromise.

Both John and Jim were devout Catholics.  They had a holy union commitment ceremony in St. Margaret's Episcopal Church in Washington D.C. in 1991, presided over by a Catholic priest. In the three years since Jim's death, John has continued the healing process and now has a special man in his life. John worries that without the protection of marriage his newly formed family lacks the protetions that only marriage can bring. 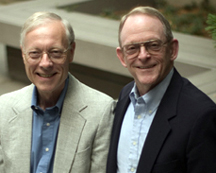 Charles (right), 73, is retired after working for 25 years as a fundraiser for institutions in the Baltimore area, including the Baltimore Symphony Orchestra and the Johns Hopkins School of Medicine. Ordained a Unitarian minister in 1962, Charles was heavily involved in the civil rights movement in Alabama in the mid 60s and then became an organizer for the American Civil Liberties Union in ten southern states.  Glen, 69, is retired after 31 years of legislative planning and analysis for the U.S. Social Security Administration.  They live in Baltimore and have been together for more than 28 years.

As senior citizens, Charles and Glen are healthy and active.  They enjoy traveling around the world and share interests in art, theater and classical music.  They are living their ""golden years"" to the fullest, but worry about what will happen to them when the time comes to slow down.  Without the benefits and protections of marriage, the decades Charles and Glen have spent together could be at risk.

""We are concerned about being separated in a nursing home,"" Charles says.  ""We are so grateful to have each other; we'd hate to be alone as gay seniors.  But we fear we might end up alone if we can't protect our relationship.""

As a retired federal employee, Glen has excellent health benefits and coverage that he cannot share with Charles.  Now that Charles is in his 70's, he wonders what will happen if he becomes ill and the protections of marriage are not available to him. 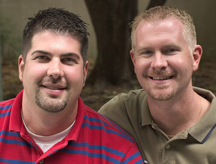 Ryan, 33, is a paramedic and the public relations coordinator for the City of Cambridge's Department of Emergency Medical Services. He is also a part-time RN in the Emergency Department at Peninsula Regional Medical Center in Salisbury. Steve, 35, is a flight nurse for Washington Hospital Center and a part-time paradmedic for the City of Cambridge. They live in East New Market on the Eastern Shore and have been together for nine years.

Because they both encounter critically ill patients in their jobs every day, Steve and Ryan fear the day they might become sick or injured and one would be prevented from making medical decisions on the other's behalf.  They have no assurance that the hospital Steve works for would let his partner visit him if he were a patient in the intensive care unit.  This is one of the many reasons Steve and Ryan want the rights and protections of marriage.

Steve and Ryan's interests outside of work - they met while working together as paramedics - include sailing on Chesapeake Bay and caring for their two West Highland terriers.  Both are lifelong Marylanders.  Both are Methodist.  Ryan is a veteran of the U.S. Navy.

Patrick, 31, is a lawyer for a disability rights organization.  Dave, 29, is a broadcast engineer for a large media corporation.  They live in College Park in Prince George's County and have been together for six years.

In 1996, Dave almost died from a rare infection in his sinuses that spread to his brain.  Doctors at Johns Hopkins gave him only a five percent chance of survival.  But Dave pulled through delicate brain surgery and he was told that he was the first known survivor of this uncommon condition.  Dave is healthy and fully functioning now.  But doctors can't guarantee there won't be a recurrence of his condition or some other complication later in life.  Not having the protections of marriage has heightened Patrick and Dave's fear that Patrick's right to care for and make medical decisions for Dave will not be recognized.

In 2003, Patrick proposed to Dave while they walked on the beach under the moonlight.  Dave said yes.  In June, the couple celebrated their commitment with a holy union ceremony.  They are both religious and attend Catholic mass at gay-friendly Dignity Washington.

Patrick and Dave share a love of music.  On their first date they went to a folk band concert.  Patrick plays guitar and piano.  Dave's hobby is running an Internet radio station, www.wgay.fm.  They also enjoy traveling and the outdoors.  Dave is a lifelong Marylander. 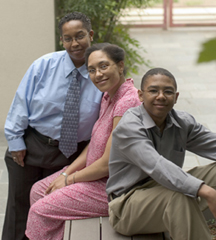 Mikki (left), 30, is an applications analyst for XM Satellite Radio.  Lisa (center), 38, is a teacher with the Prince George's County public school system.  They live in Riverdale in Prince George's County and have been together for over four years.  Lisa gave birth to a boy in September 2004 and a girl in December 2005.  They are also raising together a 16-year-old son from Lisa's former marriage.

Marriage is important to Mikki and Lisa, not just for its legal protections and benefits, but also so their children can appreciate the value of family and commitment: ""We want our boys to understand that marriage can be the foundation for a stable home and the love of two parents,"" Lisa says.  ""We want our boys to feel accepted by society.  We want them to know there is nothing unworthy at all about our family, and that having two mommies dote on them is the same as having a mommy and daddy.  We just want to be able to marry and have the same benefits and protections as any other parents.""

Lisa is a lifelong Marylander.