NSA Spying on Americans Is Illegal

What if it emerged that the President of the United States was flagrantly violating the Constitution and a law passed by the Congress to protect Americans against abuses by a super-secret spy agency? What if, instead of apologizing, he said, in essence, "I have the power to do that, because I say I can." That frightening scenario is exactly what we are now witnessing in the case of the warrantless NSA spying ordered by President Bush that was reported December 16, 2005 by the New York Times.

According to the Times, Bush signed a presidential order in 2002 allowing the National Security Agency to monitor without a warrant the international (and sometimes domestic) telephone calls and e-mail messages of hundreds or thousands of citizens and legal residents inside the United States. The program eventually came to include some purely internal controls - but no requirement that warrants be obtained from the Foreign Intelligence Surveillance Court as the 4th Amendment to the Constitution and the foreign intelligence surveillance laws require.

In other words, no independent review or judicial oversight.

That kind of surveillance is illegal. Period.

The day after this shocking abuse of power became public, President Bush admitted that he had authorized it, but argued that he had the authority to do so. But the law governing government eavesdropping on American citizens is well-established and crystal clear. President Bush's claim that he is not bound by that law is simply astounding. It is a Presidential power grab that poses a challenge in the deepest sense to the integrity of the American system of government - the separation of powers between the legislative and executive branches, the concept of checks and balances on executive power, the notion that the president is subject to the law like everyone else, and the general respect for the "rule of law" on which our democratic system depends.

The ACLU ran the following advertisement in the December 29, 2005 edition of The New York Times: 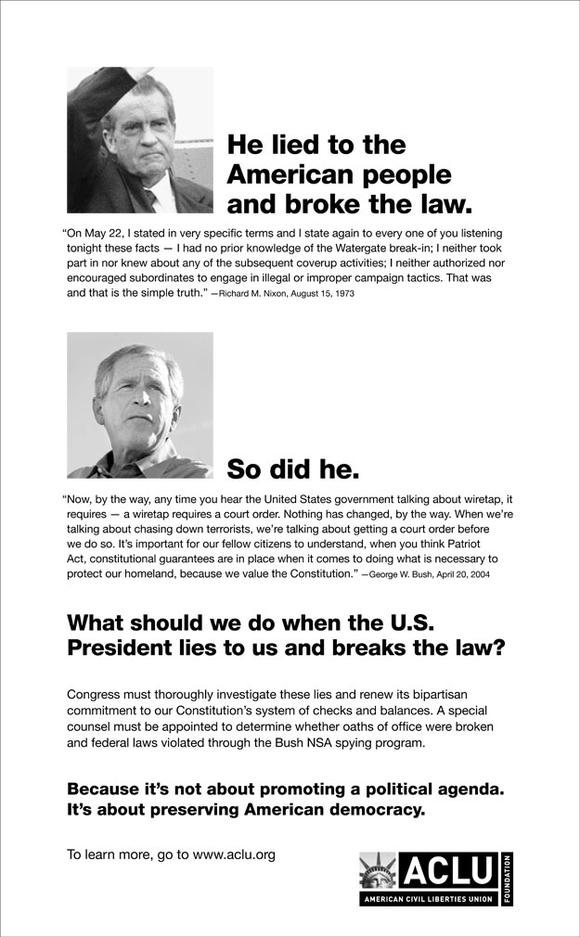 The tensions between the need for intelligence agencies to protect the nation and the danger that they would become a domestic spy agency have been explicitly and repeatedly fought out in American history. The National Security Act of 1947 contained a specific ban on intelligence operatives from operating domestically. In the 1970s, America learned about the extensive domestic political spying carried out by the FBI, the military, the CIA, and the NSA, and Congress passed new laws to prevent a repeat of those abuses. Surveillance laws were debated and modified under presidents Ford, Carter, Reagan, Bush Sr. and Clinton.

But, President Bush would sweep aside this entire body of democratically debated and painstakingly crafted restrictions on domestic surveillance by the executive branch with his extraordinary assertion that he can simply ignore this law because he is the Commander-in-Chief. In a December 17 radio address, for example, Bush asserted that the spying was "fully consistent with my constitutional responsibilities and authorities." But his constitutional duty is to "take care that the laws be faithfully executed" (Article II, Section 3); the law here clearly establishes well-defined procedures for eavesdropping on U.S. persons, and the fact is, Bush ordered that those procedures not be followed.

Government eavesdropping on Americans is an extremely serious matter; the ability to intrude on the private realm is a tremendous power that can be used to monitor, embarass, control, disgrace, or ruin an individual. Because it is so invasive, the technology of wiretapping has been subject to carefully crafted statutory controls almost since it was invented. Ignoring those controls and wiretapping without a court order is a crime that carries a significant prison sentence (in fact, criminal violations of the wiretap statute were among the articles of impeachment that were drafted against President Nixon shortly before his resignation).

Unfortunately, although the law in this matter is crystal clear, many Americans, faced with President Bush's bold assertions of "inherent" authority for these actions, will not know what to believe. There are only 5 points they need to understand:

Point #1: Electronic surveillance by the Government is strictly limited by the Constitution and Federal Law

The law on surveillance begins with the Fourth Amendment to the Constitution, which states clearly that Americans' privacy may not be invaded without a warrant based on probable cause.

The US Supreme Court (US v. Katz 389 US 347) has made it clear that this core privacy protection does cover government eavesdropping. As a result, all electronic surveillance by the government in the United States is illegal, unless it falls under one of a small number of precise exceptions specifically carved out in the law.

In other words, the NSA can only spy where it is explicitly granted permission to do so by statute. Citizens concerned about surveillance do not have to answer the question, "what law restricts the NSA's spying?" Rather, the government is required to supply an answer to the question "what law permits the NSA to spy?"

Point #2: There are only three laws that permit the government to spy

There are only three laws that authorize any exceptions to the ban on electronic eavesdropping by the government. Congress has explicitly stated that these three laws are the exclusive means by which domestic electronic surveillance can be carried out (18 USC, Section 2511(2)(f)). They are:

Point #3: The Bush-NSA spying was not authorized by any of these laws

Title III and ECPA govern domestic criminal wiretaps and are not relevant to the NSA's spying. FISA is the law under which the NSA should have operated. It authorizes the government to conduct surveillance in certain situations without meeting all of the requirements of the Fourth Amendment that apply under criminal law, but requires that an independent Foreign Intelligence Surveillance Court oversee that surveillance to make sure that Americans who have no ties to foreign terrorist organizations or other "foreign powers" are not spied upon.

FISA was significantly loosened by the Patriot Act (which, for example, allowed it to be used for some criminal investigations), and parts of it now stand in clear violation of the Constitution's Fourth Amendment in the view of the ACLU and many others. However, even the post-Patriot Act version of FISA does not authorize the president to conduct warrantless eavesdropping on U.S. citizens or permanent legal residents in the U.S. without an order from the FISA Court. Yet it is that very court order requirement - imposed to protect innocent Americans - that the President has ignored.

In fact, one member of the FISA Court, Judge James Roberston, has apparently resigned from the court in protest of President Bush's secret authorization of this program. And the New York Times reported that the court's chief judge complained about the program when she was (belatedly) notified of it, and refused to allow information gathered under the program to be used as the basis for FISA wiretap orders.

Congress after 9/11 approved an Authorization to Use Military Force against those responsible for the attacks in order to authorize the president to conduct foreign military operations such as the invasion of Afghanistan.

But that resolution contains no language changing, overriding or repealing any laws passed by Congress. Congress does not repeal legislation through hints and innuendos, and the Authorization to Use Military Force does not authorize the president to violate the law against surveillance without a warrant any more than it authorizes him to carry out an armed robbery or seize control of Citibank in order to pay for operations against terrorists. In fact, when President Truman tried to seize control of steel mills that were gripped by strikes in 1952, the Supreme Court decisively rejected his authority to make such a seizure, even in the face of arguments that the strike would interfere with the supply of weapons and ammunition to American troops then under fire on the battlefields of the Korean War.

In fact, FISA contains explicit language describing the president's powers "during time of war" and provides that "the President, through the Attorney General, may authorize electronic surveillance without a court order under this title to acquire foreign intelligence information for a period not to exceed fifteen days following a declaration of war by the Congress." 50 U.S.C. § 1811 (emphasis added). So even if we accept the argument that the use-of-force resolution places us on a war footing, warrantless surveillance would have been legal for only 15 days after the resolution was passed on September 18, 2001.

Point #5: The need for quick action does not justify an end-run around the courts
The FISA law takes account of the need for emergency surveillance, and the need for quick action cannot be used as a rationale for going outside the law. FISA allows wiretapping without a court order in an emergency; the court must simply be notified within 72 hours. The government is aware of this emergency power and has used it repeatedly. In addition, the Foreign Intelligence court is physically located in the Justice Department building, and the FISA law requires that at least two of the FISA judges reside in the Washington, DC area, for precisely the reason that rapid action is sometimes needed.

If President Bush still for some reason finds these provisions to be inadequate, he must take his case to Congress and ask for the law to be changed, not simply ignore it.

The president is bound by the rule of law

President Bush's claim that he has "inherent authority" as Commander-in-Chief to use our spy agencies to eavesdrop on Americans is astonishing, and such spying is clearly illegal. It must be halted immediately, and its origins must be thoroughly investigated by Congress and by a special counsel. (See letter from the ACLU to Attorney General Gonzales calling for a special counsel).

Given the extensive (indeed, excessive) surveillance powers that the government already possesses, the Administration's blatantly illegal use of warrantless surveillance raises an important question: why? One possibility, raised by the New York Times in a Dec. 24, 2005 story ("Spy Agency Mined Vast Data Trove, Officials Report"), is that the NSA is relying on assistance from several unnamed telecommunications companies to "trace and analyze large volumes of communications" and is "much larger than the White House has acknowledged."

This, as security expert Bruce Schneier has noted, suggests the Bush Administration has developed a "a whole new surveillance paradigm" - exploiting the NSA's well known capabilities to spy on individuals not one at a time, as FISA permits, but to run communications en masse through computers in the search for suspicious individuals or patterns. This "new paradigm" may well be connected to the NSA program sometimes known as "Echelon," which carries out just that kind of mass collection of communications (see www.nsawatch.org). This "wholesale" surveillance, as Schneier calls it, would constitute an illegal invasion of Americans' privacy on a scale that has never before been seen. (See Schneier, "NSA and Bush's Illegal Eavesdropping," Salon.com)

We do not know from the report which companies are involved or precisely how or what the NSA can access. But this revelation raises questions about both the legal authority of the NSA to request and receive this data, and whether these companies may have violated either the Federal laws protecting these communications or their own stated privacy polices (which may, for example, provide that they will only turn over their customers' data with their consent or in response to a proper order).

Regardless of the scale of this spying, we are facing a historic moment: the President of the United States has claimed a sweeping wartime power to brush aside the clear limits on his power set by our Constitution and laws - a chilling assertion of presidential power that has not been seen since Richard Nixon.

Top Ten Myths About the Illegal NSA Spying on Americans

ACLU Ad: The President Lied to the American People and Broke the Law