On October 19, 2007, the feature film Rendition, starring Jake Gyllenhaal, Reese Witherspoon, Alan Arkin, Peter Sarsgaard, and Meryl Streep, opened nationwide. The film tells the story of an American family torn apart when the father, Anwar El-Ibrahimi, is kidnapped by the C.I.A. from a Washington, D.C., airport. Anwar is flown to North Africa, where he is held captive and brutally tortured.

Although Rendition is now a feature length film, the practice of extraordinary rendition is all too real. In the name of national security, the U.S. government is sponsoring torture programs that transcend the bounds of law and threaten our most treasured values. The ACLU has brought two lawsuits against the U.S. government and the airline that facilitates flight planning for C.I.A. renditions. The cases are El Masri v. Tenet, a lawsuit against former CIA director George Tenet on behalf of German citizen Khaled El-Masri, and Mohamed v. Jeppesen, a lawsuit against Boeing subsidiary Jeppesen Dataplan, Inc. 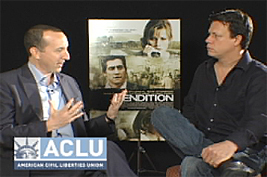