Invokes Wiretapping of Dr. Martin Luther King, Jr. on National Holiday in Celebration of His Life 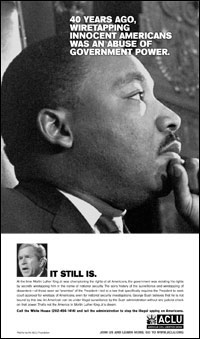 ACLU Calls for a Special Counsel: Add Your Voice

NEW YORK – The American Civil Liberties Union today ran a full-page advertisement in the Washington Post criticizing the president for authorizing the National Security Agency to engage in illegal surveillance of Americans.

The ad invokes Dr. Martin Luther King Jr., the civil rights pioneer who was an innocent victim of illegal government wiretapping and draws the correlation between abuse of government power and illegal warrantless wiretapping authorized by President Bush.

“It has never been acceptable for the government to spy on Americans without having to go to court and present evidence as to why the individual is under suspicion. It was unacceptable when they spied on Martin Luther King and it is unacceptable today,” said ACLU Executive Director Anthony D. Romero. “This fundamental tenet of American democracy has been blatantly violated by President Bush and he must be held accountable. No one, most importantly our elected leader, is above the law.”

The full-page ad depicts the image of King with the reminder that “40 years ago, wiretapping innocent American citizens was an abuse of government power. It still is.” The ACLU provides the phone number for the White House and asks that people call and “Tell the administration to stop the illegal spying on Americans.” As a result of surveillance of citizens in the mid-70’s, Congress passed a law mandating that the government receive court approval before instigating wiretapping. It is this law that President Bush has blatantly violated, according to the ACLU.

Similar ACLU ads ran recently in the New York Times and compared the actions and words of President Bush and former President Richard Nixon, both of whom denied allegations of illegal spying. The series was spurred by recent revelations that President Bush authorized the National Security Agency to conduct electronic surveillance of people within the United States, including U.S. citizens, without a warrant.

“Our government is based upon a separation of powers and a system of checks and balances,” said Caroline Fredrickson, Director of the ACLU Washington Legislative Office. “The actions taken by the president undermine the very foundations of our country. We urge the relevant Congressional committees to investigate how the president abused his power as our chief executive. We applaud Senate Judiciary Committee Chairman Arlen Specter for committing to hold oversight hearings. The American people deserve to know the truth.”

In a formal request sent to Attorney General Alberto Gonzales, the ACLU called for the appointment of “an outside special counsel with the independence to investigate and prosecute any and all criminal acts committed by any member of the Executive Branch in the warrantless electronic surveillance of people in the United States over the past four years by the NSA,” noting that “such crimes are serious felonies and they need to be fully and independently investigated.”

The previous ads and more information on the ACLU’s call for an outside counsel are online at www.aclu.org/spyads