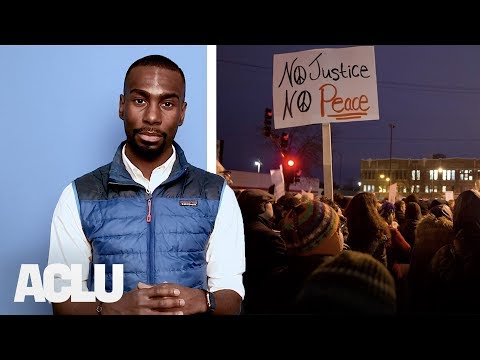 The Fifth Circuit Court of Appeals in August ruled that an unnamed Baton Rouge police officer’s lawsuit against Mckesson could proceed. The lawsuit, Doe v. Mckesson, seeks damages from Mckesson for injuries the officer sustained at a protest in Baton Rouge, Louisiana, on July 9, 2016. The protest was held to celebrate the life of Alton Sterling — a Black resident who was shot and killed by two on-duty police officers — and demand accountability and transformative change. Mckesson joined the protest and encouraged others to do so as well.

“The goal of lawsuits like these is to prevent people from showing up at a protest out of the fear that they might be held responsible if anything happens,” said Mckesson. “If this precedent lasts, it could make organizers all across the country responsible for all types of things they have no control over, such as random people coming into a protest and causing problems. We can’t let that happen.”

The Supreme Court in 1982 held that while the Constitution does not protect violence, it does limit the government’s ability to place responsibility for that violence onto peaceful protesters. That seminal civil rights case, NAACP v. Claiborne Hardware Co., has been cited repeatedly to ensure robust speech protections, including to dismiss a lawsuit against then-candidate Donald Trump for violent acts committed at a campaign rally and to challenge efforts to stifle Keystone XL pipeline protests.

“The Supreme Court has long recognized that peaceful protesters cannot be held liable for the unintended, unlawful actions of others,” said ACLU National Legal Director David Cole. “If the law had allowed anyone to sue leaders of social justice movements over the violent actions of others, there would have been no Civil Rights Movement. The lower court’s ruling is a threat to the First Amendment rights of millions of Americans.”

The ACLU warns that as long as the Fifth Circuit’s ruling remains in effect, Americans will be deterred from exercising their First Amendment rights out of fear of inviting — and having to fight — lawsuits that the Supreme Court has already held unconstitutional.

“Unless the Supreme Court reverses this travesty, these kinds of suits will become fearsome and illegitimate weapons wielded to silence people who have important, but uncomfortable things to tell their fellow citizens,” said David Goldberg, counsel of record on Mckesson’s legal team and attorney with Donahue, Goldberg, Weaver, & Littleton, LLP.

The petition for certiorari is here: https://www.aclu.org/legal-document/mckesson-v-doe-petition-writ-certiorari.

An ACLU video on the filing is here: https://youtu.be/K7CjwMGBAYk.