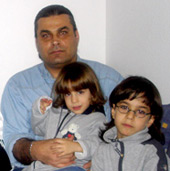 WASHINGTON — The American Civil Liberties Union today announced the first ever lawsuit against former CIA director George Tenet challenging the CIA’s abduction of a foreign national for detention and interrogation in a secret overseas prison. The lawsuit was filed on behalf of Khaled El-Masri, an innocent German citizen victimized by the CIA’s policy of “extraordinary rendition.”

“Kidnapping a foreign national for the purpose of detaining and interrogating him outside the law is contrary to American values,” said Anthony D. Romero, Executive Director of the ACLU. “Our government has acted as if it is above the law. We go to court today to reaffirm that the rule of law is central to our identity as a nation.”

The lawsuit charges that George Tenet and other CIA officials violated U.S. and universal human rights laws when they authorized agents to kidnap El-Masri, and that his unlawful abduction and treatment were the direct result of an illegal CIA policy known as “extraordinary rendition.”

The lawsuit also charges that the three corporations that owned and operated the airplane used to transport El-Masri to detention in Afghanistan are legally responsible for assisting in the violation of his civil and human rights. These corporations supplied the aircraft and provided the personnel used in the illicit transportation of El-Masri, knowing that the transfer was illegal, according to the ACLU.

“The CIA’s policy of extraordinary rendition is a clear violation of universal human rights protections,” said Steven Watt, the ACLU’s primary human rights advisor on the case. “Snatching Mr. El-Masri off the street and hiding him away in a secret prison was illegal under American and international law. Keeping him imprisoned after his innocence was established was immoral by any standard.”

According to the ACLU lawsuit, El-Masri, a 42-year-old German citizen and father of five young children, was forcibly abducted while on holiday in Macedonia. He was detained incommunicado, beaten, drugged, and transported to a secret CIA prison in Afghanistan, where he was subjected to inhumane conditions and coercive interrogation. El-Masri was forbidden from contacting a lawyer or any member of his family. After several months of confinement in squalid conditions, he was abandoned on a hill in Albania with no explanation, never having been charged with a crime.

According to the ACLU, soon after El-Masri was flown to Afghanistan, CIA officers realized that they had abducted, detained, and interrogated an innocent man. Tenet, former director the CIA, was notified about the mistake, yet El-Masri remained in detention for two more months.

“I am asking the American government to admit its mistakes and to apologize for my treatment,” said El-Masri. “Throughout my time in the prison, I asked to be brought before a court but was refused. Now I am hoping that an American court will say very clearly that what happened to me was illegal and cannot be done to others.”

El-Masri had planned to be present at the press conference announcing the filing of this lawsuit, and to visit Capitol Hill to share his account with congressional aides. However, when his plane landed at Hartsfield International Airport in Atlanta on Saturday night, he was denied entry to the United States by officials of the Bureau of Immigration and Customs Enforcement. El-Masri was sent back to Germany on the next available flight. U.S. officials have provided no reason for their refusal to admit El-Masri, a German citizen who has never been charged with a crime.

The issue of CIA clandestine prisons is receiving a lot of attention recently in the American as well as international press. Much of this attention has been generated by reports of CIA secret prisons in Eastern Europe and the recent release of logs detailing flights used by the CIA in “extraordinary rendition.”

The lawsuit, El-Masri v. Tenet, will be filed this morning in the U.S. District Court for the Eastern District of Virginia.