NASHVILLE, Tenn. – The American Civil Liberties Union of Tennessee and the ACLU filed a lawsuit in federal court today challenging a new, first-of-its-kind Tennessee law that would require businesses and other entities that open their facilities to the public and allow transgender people to use the restroom that matches their gender to post a government-prescribed warning sign.

The lawsuit, filed on behalf of business owners in Nashville and Chattanooga who object to the stigmatizing message they would be required to display, states that the law violates the First Amendment and asks the court for a preliminary injunction to stop enforcement of the law while the lawsuit proceeds.

The lawsuit was filed on behalf of Kye Sayers, owner of the Sanctuary performing arts and community center in Chattanooga, and Bob Bernstein, owner of Fido restaurant in Nashville. Both businesses have informal policies allowing customers to determine which restroom is appropriate for them, and have not had any complaints or concerns raised about their restroom policies.

“Sanctuary was founded specifically to create a safe space for transgender and intersex people and their families in a state that can be unwelcoming to LGBTQ people,” said plaintiff Kye Sayers. “I am against posting offensive signs that stigmatize and deny the existence of transgender and intersex people at our center. These signs undermine Sanctuary’s very mission and send the exact opposite of the welcoming message we try to convey in everything we do.”

“As a former journalist, I believe strongly in free speech. Politicians have no right to force me to post a controversial, ideologically-motivated and inaccurate sign in my place of business,” said plaintiff Bob Bernstein. “I have worked hard to create a welcoming environment for all in the restaurants that I own, and I don’t intend to stop now.”

If the law goes into effect, any business that fails to prevent transgender and intersex people from using the restroom that most aligns with who they are would be forced to post signs with the word “NOTICE” in yellow on a red background at the top, followed by text stating, “THIS FACILITY MAINTAINS A POLICY OF ALLOWING THE USE OF RESTROOMS BY EITHER BIOLOGICAL SEX, REGARDLESS OF THE DESIGNATION ON THE RESTROOM,” or face criminal charges. 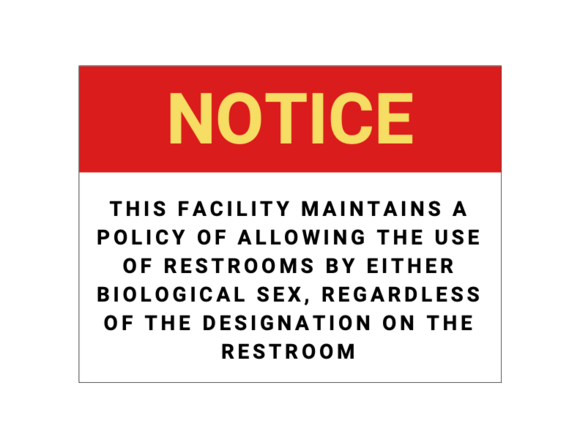 “Transgender people frequently face discrimination and harassment in all facets of life, including being assaulted or harassed in restrooms. This law encourages such violence,” said Rose Saxe, deputy project director of the ACLU’s Jon L. Stryker and Slobodan Randjelović LGBTQ & HIV Project. “We filed this lawsuit to ensure that transgender and intersex people are able to go about their daily lives and use the restroom as needed just like anyone else.”

While courts have recognized that businesses can be required to display factual and noncontroversial information, they have repeatedly ruled that forcing a business owner to display a sign for the sole purpose of promoting a political viewpoint is unconstitutional.

“It’s a flagrant violation of the First Amendment for the government to force business owners to display a controversial, government-mandated point of view,” said Emerson Sykes, senior staff attorney with the ACLU’s Speech, Privacy, and Technology Project. “The bottom line is that government is not allowed to compel anti-trans speech, period.”

The law is scheduled to go into effect on July 1. The ACLU would like to hear from any businesses that receive a notice that they are violating this law at https://action.aclu.org/legal-intake/aclu-tn-legal-intake-form.